The country’s economic managers are requesting the Commission on Elections (Comelec) to exempt 145 key infrastructure projects from the election ban to avoid delays in the implementation of the “Build, Build, Build” program. 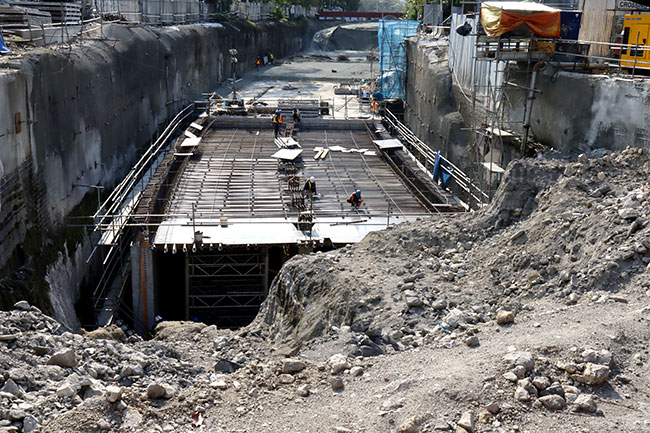 Workers are busy fitting metal pipes at a portion of the subway that will run from SM North crossing to Quezon City Memorial Circle. PHOTO BY ROGER RAÑADA

“Attached, for the Commission’s consideration, is the list for priority ongoing and new infrastructure projects to be implemented by the National Government Agencies, Government Corporation, Constitutional Fiscal Autonomy Group, as well as Autonomous Region in Muslim Mindanao,” the economic managers said in a letter addressed to Comelec chairman Sheriff Abas.

The request, dated Feb. 18, 2019, was signed by Socioeconomic Planning Secretary Ernesto Pernia, Finance Secretary Carlos Dominguez 3rd and Budget Secretary Benjamin Diokno. It was released to reporters by the Department of Budget and Management on Wednesday.

The 145 programs and projects, as submitted by the concerned agencies to the Budget department, are included in the 2019 General Appropriations Bill.

The letter also cited 603 programs and projects under the Department of Public Works and Highways for fiscal year (FY) 2019 investment targets included in the updated “2017 to 2022 Public Investment Program as input to the FY 2019 Budget Preparation.”

“The exemption will facilitate implementation and ensure that there are no delays and disruption of these national priority projects,” the Cabinet officials added.

They emphasized that these projects were part of the Build Build Build agenda of the government designed to usher the envisioned “Golden Age of Infrastructure.”

Pernia, Dominguez and Diokno also said the government was committed to increase public spending on infrastructure from 4.4 percent of gross domestic product in 2017 to at least 6.9 percent by 2022.

They cited Section 26 of the Omnibus Election Code, which states that election ban on government spending “shall not apply to ongoing public works projects commenced before the campaign period or similar projects under foreign agreements” and that “it shall be the duty of the government officials or agencies concerned to report to the Commission the list of all such projects being undertaken by them.”

The election ban on government spending starts on March 29 and ends May 12.