In an upset, 'Green Book' wins best picture at Oscars 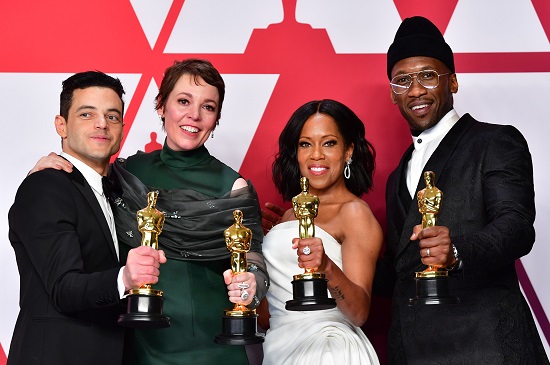 Rudolph summarized a rocky Oscar preamble that featured numerous missteps and backtracks by the Academy of Motion Picture Arts and Sciences: "There is no host, there won't be a popular movie category and Mexico is not paying for the wall."

The trio then presented best supporting actress to Regina King for her pained matriarch in Barry Jenkins' James Baldwin adaptation "If Beale Street Could Talk." The crowd gave King a standing ovation for her first Oscar.

"To be standing here representing one of the greatest artist of our time, James Baldwin, is a little surreal," said King. "James Baldwin birthed this baby."

The inclusivity of the winners Sunday stood in stark contrast to the #OscarsSoWhite backlash that marked the 2016 and 2015 Oscars. Since then, the academy has worked to diversify its largely white and male membership, adding several thousand new members and opening the academy up internationally.

More women won Oscars than ever before. Still, this year's nominations were criticized for not including a female best director nominee or a best-picture nominee directed by a woman.

Though the once presumed front-runner "A Star Is Born" appeared to flame out as awards season continued, it won, as expected, for the song "Shallow," which Lady Gaga and Bradley Cooper performed during the ceremony. As she came off the stage, Cooper had his arm around Gaga as she asked, "Did I nail it?"

Adam McKay's Dick Cheney biopic "Vice" won makeup and hairstyling for its extensive physical transformations. The category was one of the four that the academy initially planned to present during a commercial break and as its winners — Greg Cannom, Kate Biscoe and Patricia Dehaney — dragged on in a litany of thank-yous, they were the first to have their microphone cut off.

To turn around ratings, Oscar producers pledged a shorter show. In the academy's favor is a popular crop of nominees: "Bohemian Rhapsody," ''A Star Is Born" and, most of all, "Black Panther" have all amassed huge sums in ticket sales. Typically, when there are box-office hits (like "Titanic"), more people watch the Oscars. AP