Despite the environmental woes that prompted its six-month closure, Boracay was recently listed among Asia’s top 25 beaches rankings of an American travel website. 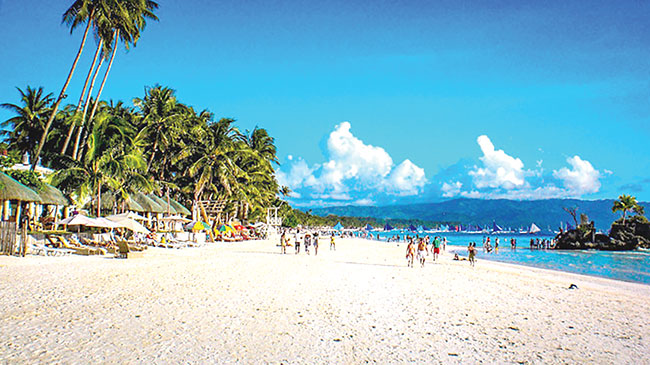 ALWAYS PARADISE Tourists throng Boracay Island, which has not lost its reputation as one of the world’s best destinations. BORACAY INFORMATION BUREAU

Two other Philippine beaches also made it to this year’s elite list.

These are Nacpan Beach at 13th, and Las Cabañas Beach at 22nd, both in El Nido, Palawan.

In a recent top 50 best beaches in Asia by Flight Network, nine beaches in the country were recognized, with the Hidden Beach in El Nido, Palawan ranked as No. 1.

Boracay, however, was not in the list. In 2018, the White Beach was listed second best beach in Asia.

The Tourism Congress of the Philippines (TCP) said the ranking was a testament to Boracay’s enduring reputation and beauty despite its closure last year.

“This means that Boracay was able to hit the ground running upon its reopening. That’s a testament to [its] reputation and beauty, that despite everything, it was listed as one of the top destinations in the region,” TCP president Jose Clemente 3rd told reporters.

Clemente said now that Boracay is 90 percent operational, the government and the private sector has become strict in implementing environmental laws and ordinances.

In a recent bulletin from the Boracay Inter-Agency Task Force, 320 more tourism establishments and hotels have been allowed to operate on the island, which brings a total of 11,662 rooms available for booking.

“The problem before was less of the influx of visitors in Boracay but more on inefficient enforcing of those ordinances and laws. This time, despite the influx of tourists, the element of sustainability will still be there,” Clemente said.

He, however, explained that accessibility to the island remains inadequate because of limited flights.

“But now I think maybe they (airlines) have to rethink it because airfares are now high, but people are still going. So it’s still a viable destination,” Clemente said.

Boracay reopened on October 26 after a six-month clean-up and rehabilitation ordered by President Rodrigo Duterte.

The TripAdvisor’s ranking of beaches was determined by the quality and quantity of reviews and rankings for beach destinations, restaurants, hotels, attractions on the islands and traveler booking interest.