A Supreme Court (SC) justice has expressed alarm over the Chico River irrigation loan agreement between the Philippines and China that is supposedly advantageous to Beijing.

Associate Justice Antonio Carpio, in his speech at the Pamantasan ng Lungsod ng Maynila over the weekend, warned that China could seize oil and gas-rich Philippine assets in the South China Sea (West Philippine Sea) if the country defaulted on payment.

The Manila Times columnist Rigoberto Tiglao had belittled the Supreme Court justice, saying Carpio was not an international lawyer. 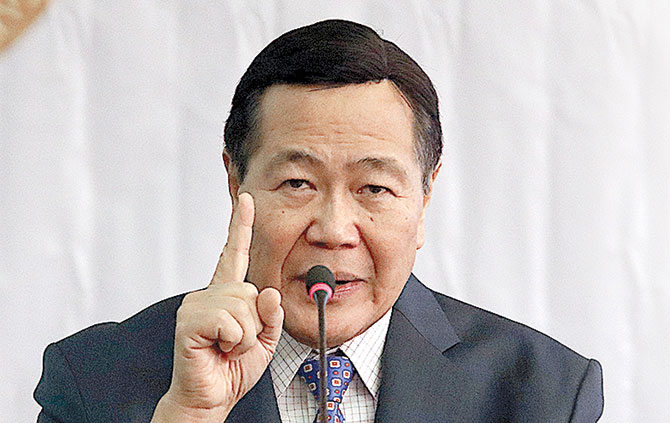 In his speech, Carpio said China would ravish natural gas in areas contested by Manila and Beijing in the disputed sea if the Philippines failed to pay the $62-million loan.

The 20-year loan deal for the Chico River Pump Irrigation Project was signed by Ambassador Extraordinary and Plenipotenciary of China Zhao Jianhua and Finance Secretary Carlos Dominguez 3rd on April 10, 2018.

“In case of default by the Philippines in the repayment of the loan, China can seize, to satisfy any arbitral award in favor of China, patrimonial assets and assets dedicated to commercial use of the Philippine government,” Carpio pointed out.

The Supreme Court justice, who will retire in October this year, cited paragraph 8.1 of the loan agreement wherein the Philippines “expressedly waived any sovereign immunity” over all its assets except for some, including “public or governmental use as distinguished from patrimonial assets and assets dedicated to commercial use.”

Patrimonial assets are properties owned by the Philippines in its private capacity and not for public use, public service or intended for development of national wealth.

Carpio said “patrimonial assets and assets dedicated to commercial use” include the oil and gas within the Philippine exclusive economic zone (EEZ) and that includes the West Philippine Sea.

An EEZ is an area within 200 nautical miles from the country’s baseline, where it can explore and exploit any resources; carry out any search, excavation or drilling operations; conduct any research; and construct, maintain or operate any artificial island, off-shore terminal, installation or other structures or devices.

He added that the loan agreement was governed by Chinese law and in case of disagreement and lawsuit, the “arbitration shall be conducted by the China International Economic Trade Arbitration Commission under CIETAC arbitration rules” that shall be held in their hometown in China.

He also warned that whatever the ruling of CIETAC shall be “final and binding.”

Carpio said with the home court advantage in the lawsuit, “patrimonial assets and assets dedicated to commercial use” was “defined under Chinese law, interpreted by a Chinese-majority tribunal in Beijing and enforced by the Chinese government in the Philippines.”

This means that the Philippines will have no chance of winning the arbitration because China will always have a majority in the three-member arbitration panel.

Carpio said there was a provision in the arbitration clause where the chairman of CIETAC, a government officer of China, shall appoint the presiding arbitrator if ever there shall be no common candidates on the list of arbitrators for both countries.

A 2013 report from the United States Energy Information Administration said Reed Bank could hold up to 5.4 billion barrels of oil and 55.1 trillion cubic feet of natural gas.