“There is a plot to discredit the President and destabilize his government,” a highly placed source in the Office of the President said.

“There’s an obvious pattern of close coordination among some media organizations for the timely publication of anti-Duterte stories,” the source told this writer.

The playbook is all too familiar: Utilize the media, plant fake news, distribute them to the friendly media outlets, whet the people’s appetite, arouse their anger, manipulate public emotion, touch base with the Leftist organization, enlist the support of the police and the military, then go for the “kill.” 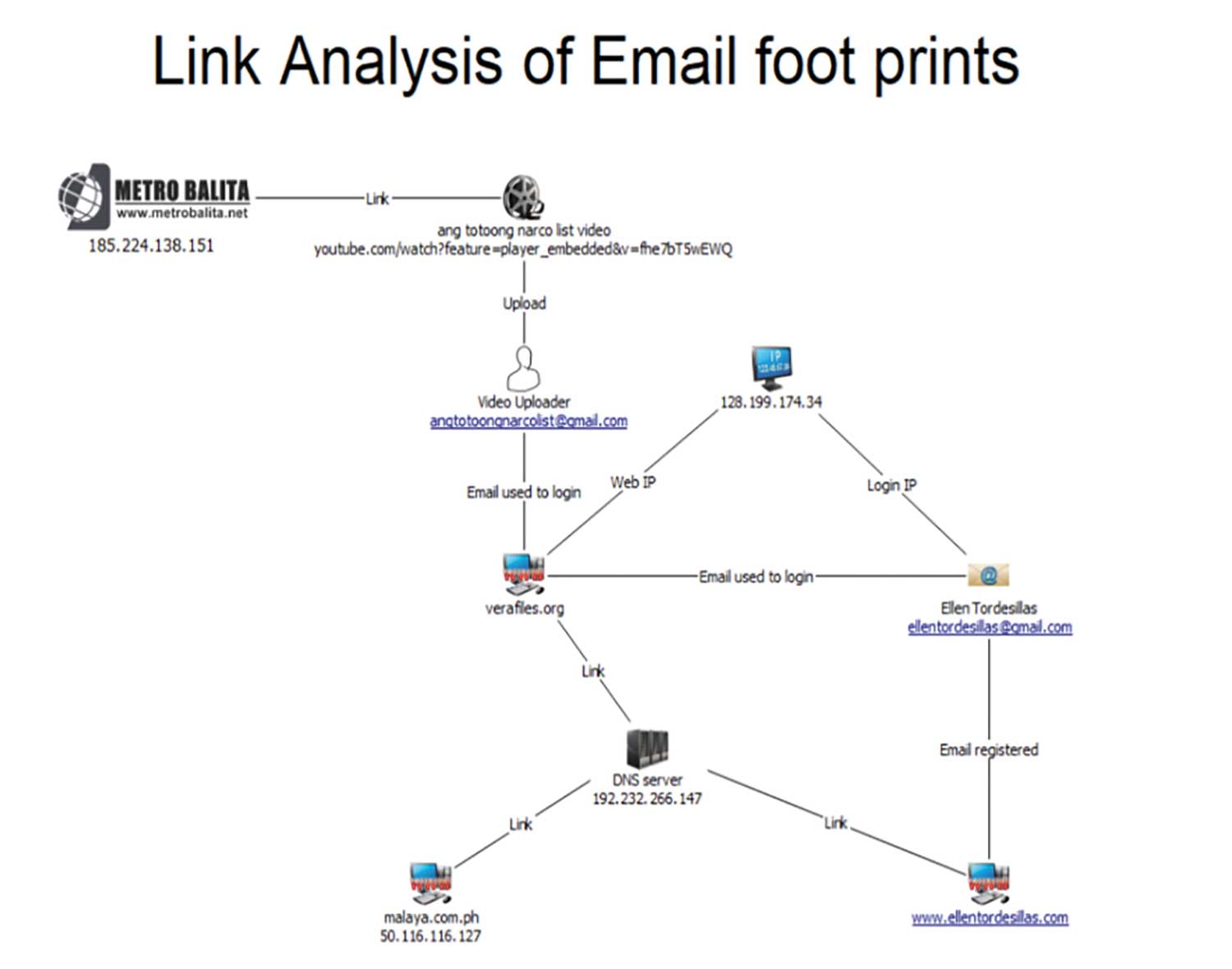 Image shows an analysis of the email footprint of the distribution of the so-called ‘Bikoy’ video.

Media participants in the Oust-Duterte move

“Bikoy,” obviously a pseudonym, was the source of the black propaganda, the matrix shows. From Bikoy, the stories go to Ellen Tordesillas, president of Vera Files, who acts as the nexus and distributor of the materials to the Philippine Center for Investigative Journalism (PCIJ), Rappler and the National Union of People’s Lawyers (NUPL). These organizations, in turn, distribute the false narratives to their respective members. (Please refer to the matrix.)

Tordesillas also currently serves as a fact-checker for Facebook. The matrix, however, did not disclose the real identity of Bikoy.

Save for the NUPL, a leftist group, the rest of the people from Rappler, Vera Files and the PCIJ named in the matrix are members of the media. It would now appear that these journalists are collaborating with the Left in their effort to destabilize the government, the matrix shows.

“Wala namang tao na ganoon (referring to Bikoy),” the source said. The series of invented stories against the President was part of the black propaganda campaign by the Yellows, the source added. The opposition couldn’t accept that the ratings of the President remain stratospheric.

“Mataas ang credibility ni Presidente.” They could not believe that despite the series of black propaganda campaign against the President, his popularity and trust ratings remain unaffected.

Vera Files, the PCIJ and Rappler received largesse from various foreign sources, the source said, without specifying a figure.

Two other independent sources confirmed that there is an active plot to oust the President. It was obvious, they said. For one thing, it is not the duty of the press or the media to be at the forefront of an active campaign to unseat a duly elected President. The role of the press is to inform the public and expose the shenanigans, venalities and corruption in government; but certainly not to participate in any manner or form in any campaign to destabilize the government. The media is supposed to be the purveyors of truth, not an instrument to plot against a sitting President, they added.

They said it became particularly vicious when Bikoy in his second video episode of the “Ang Totoong Narcolist” series, accused the President’s 14-year old daughter, Veronica and his partner, Honeylet, of receiving “payoffs from the illegal drug trade and depositing such transactions in banks in Hong Kong.”

Another tall tale was when Bikoy accused erstwhile presidential assistant Christopher Lawrence “Bong” Go of receiving kickbacks from the drug lords; that his takes were deposited in four local banks; and that his foreign bank transactions had reached P3.7 billion from 2010 to 2018. The accuser did not offer any shadow of proof to back up his accusations.

Bikoy also accused Go of having a dragon tattoo on his back that embedded a code name for alleged drug transactions.

Bikoy and his partners in crime went silent after Go bared his back to the public that showed no dragon tattoo. “Ang kinis ng likod ni Bong Go,” an amused observer said.

Another media practitioner sees malice and ill intent on the part of Ellen Tordesillas when she acted as distributor of the anti-Duterte stories, as the matrix shows. “Normally, a journalist would not share her story with other journalists or media outlets, especially if it is an enterprise or exclusive story. He or she would naturally want to have a scoop.”

If it is true that Ellen participated in the distribution of the story — whether that is legitimate or otherwise — at the very least, she will be guilty of unethical practice. And if she was paid for doing so, then she would be nothing more than a paid hack, a cheap propagandist, and therefore, fair game for the administration, he said.

The same is true in the case of Vera Files, Rappler and the PCIJ. They appear to have received massive foreign funding, which is against our Constitution, and, therefore, these media outfits cannot claim objectivity. Their critical Duterte stories become suspect.

To this date, they have not refuted allegations of foreign funding by our eminent writer, former ambassador Rigoberto Tiglao, in amounts that he said have ranged from $106,000 to $278,000.

Tordesillas has been asked to comment on the allegations against her before publication of this article, but the Times has not received a reply by deadline on Sunday.