THE 69 container vans filled with over 1,000 tons of trash from Canada were finally loaded into a ship that would return to Ottawa on Friday.

Foreign Affairs Secretary Teodoro Locsin Jr. on Thursday night did not provide details of the reshipment procedure but merely posted photos of the loading process.

"Going...going...going...," Locsin Jr. said on Twitter to accompany the photos showing container vans being loaded to the M/Bavaria, which the Canadian government had hired.

The container ship arrived at about 2:30 p.m. on Thursday and docked near the Subic Bay International Terminal Corp. (SBITC).

"After containers cleaned and ready to go ship arrival was delayed a day; Ricky Razon made sure once docked ship loaded," said Locsin. 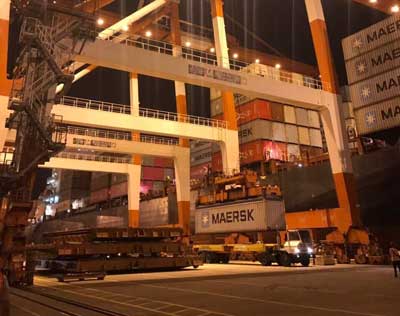 He said Canadian Ambassador "never slept" until it was all done.

The ICTSI, Locsin said, "waived all costs on land" while Canada "picked up the tab from fumigation to ship side loading."

President Rodrigo Duterte had ordered the recall of Philippine diplomats in Canada until it retrieved 69 of the 103 container vans of trash it exported to Manila in 2013 and 2014.

Of the total, 34 container vans were disposed locally.

Locsin Jr. earlier this week said the waste would be shipped out May 30. All updates, including photos and videos, would come from the Department of Foreign Affairs (DFA), the Subic Bay Metropolitan Authority (SBMA) told the media.

Canada originally shipped 103 containers of trash in 2013, but the contents of 34 were “locally disposed” in succeeding years, environmental activists said as they warned that the Philippines could become the recipient of even more garbage, given a ban imposed by China — for decades the world’s largest importer of recyclable waste — six years ago.

This so-called “Green Fence” has led to garbage from developed nations being shipped to other countries such as the Philippines and Malaysia, which this week also said it was shipping back tons of waste to Canada, the United States and Australia, among others.

In the Philippines’ case, Canada missed a May 15 deadline imposed by Duterte, prompting Manila to recall its envoys to Ottawa and curbing official travel as part of a “diminished ties” policy.

Duterte even said the Philippines would ship the garbage back at its own expense and dump it in Canadian waters if Ottawa refused entry. Manila’s rhetoric prompted the Canadian government to announce last week that it had hired a company to handle the shipment.

On Thursday, Malacañang expressed optimism that bilateral ties would return to normal.

“If the reason for the recall was the trash, then if the trash has been brought back, so there is no more reason [to keep them from returning.] That is the logic,” he said.

Environmental groups staged a protest ahead of the shipment’s departure. Aileen Lucero of Ecowaste said the mass action would cap “creative protests” mounted since 2014.

“This should serve as a lesson. We need to learn... and make sure that this should never happen again. We should not allow any country to dump their waste in our country for our dignity and for the safety and health of our people and our environment,” she added.

Other green groups also told legislators on Thursday that Canada’s move could fail to deter other countries from dumping their garbage in the Philippines, again citing China’s ban.

“We should be wary now that more waste will be coming into the Philippines illegally because of the Green Fence of China,” Mother Earth Foundation Chairman Sonia Mendoza said.

“That’s why we have this waste now from Australia, South Korea and other countries,” she added.

“The Bureau of Customs has a big duty to check all the ports because countries are not bringing [the garbage] to Manila, but to far-flung ports.”

Container vans of waste from Australia were also discovered at the southern port earlier this month, prompting a warning from Malacañang.

Customs officials also found electronic waste shipped from Hong Kong at the MICT and officials from the Chinese territory have promised an investigation.