Duterte vows to resolve flight woes 'within a month' 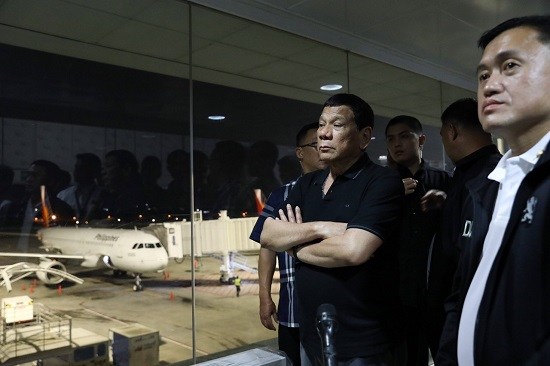 Duterte made the surprise visit after ground movement at the airport was suspended for hours on Sunday evening due to a red lightning alert.

"The Chief Executive discussed how flight aberrations could be minimized and what actions could be employed by the government, particularly the Department of Transportation, to solve the problem in the long term," the Palace said in a statement.

"He then talked to the passengers apologizing to them on the inconvenience caused by the disruptions. The President vowed to come up with a remedy within a month," it added.

Duterte, the Palace said, "talked to airline and NAIA officials regarding the cancellations and delays to know whether there are flight diversions and if affected passengers are given incentives to ease their inconvenience."

"A Philippine Airlines manager and a NAIA-Terminal 2 airport duty manager briefed the President on the flight woes and explained actions being undertaken to normalize the situation," it said.

After the inspection, the President took a break at one of the food kiosks at the airport, the Palace said.

The MIAA confirmed that a red lightning alert was issued from 6:40 p.m. to 9:15 p.m. on Sunday. This alert suspended ground movement for ramp personnel and flights for at least 2.5 hours.

The alert is a safety measure to prevent any untoward incident from happening when bolts of lightning are prevalent in the immediate area, the MIAA said.

"The Manila International Airport Authority jointly with the airlines are exerting every effort to address the situation so that normal flight operations can resume as soon as possible," it added.

Last week, Palace spokesman Salvador Panelo called out airport authorities after experiencing inconvenience during his arrival at the NAIA from Japan on June 1.

Panelo said he called the attention of Monreal about the limited number of functioning carousels and the airport's poor air conditioning system.

"It took us more than two hours to retrieve our luggages. Why? Because there was only one or two carousel functioning and there were four trips arriving simultaneously at the airport – the trip from London, from Bangkok, Singapore and from Japan," Panelo said in a Palace briefing.

The Palace official also complained that the air conditioning unit at the airport was also not functioning.

"Not only that, the air condition was not functioning, if at all; and there was no space to maneuver or to move, because can you imagine hundreds of passengers in front of one or two carousel," he said.

To avoid overcrowding at the carousels, Panelo suggested to NAIA to ask airlines to observe a 30-minute interval between embarking of passengers "so that they will not be all there in one sweep."

"We understand of course, that it's under renovation, but I think they can be better than what happened last Saturday," said Panelo, who was part of the delegation during Duterte's four-day working visit to Japan.  CATHERINE S. VALENTE, BENJIE GUEVARRA