Even though “Sexual Orientation and Gender Identity and Expression Bill” or the Sogie Bill stumbled into some roadblocks in the Senate, Sen. Ana Theresia “Risa” Hontiveros is confident that it will be passed in the 18th Congress.

According to Hontiveros, more and more people are warming up to the bill as support continues to snowball. The bill champions equal rights for LGBTQ+ members including and especially in the work place. It specifically states that if an employer or school refuses admission or dismisses a member of the LGBTQ+ community, the former could face a huge fine of P100,000 to P500,000 or imprisonment of up to six years, if decided by the court. 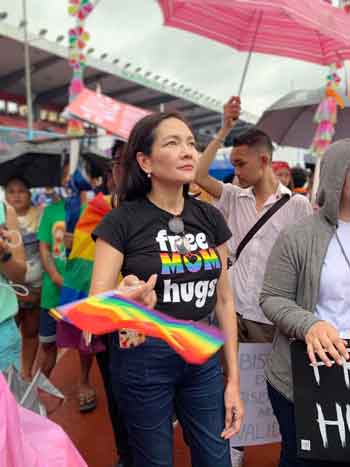 Aside from listing these companies, the IWP also monitors the enforcement of these nondiscrimination policies in the country and establishes connections with the Global Diversity Managers (or their equivalent) of those companies. If any of the policies are being violated, IWP will request action from the manager.

It’s worth noting that one of the companies in the list, Nike, has been fearless in championing diversity by parting ways with its former endorser, boxing great and Philippine senator Manny Pacquiao after he expressed his anti-LGBTQ+ comments in past interviews.

2. There have been more user-friendly platforms that have listed organizations open to diversity and inclusivity.

Social enterprises like B-Change have provided a technologically-savvy way of listing down organizations that are LGBTQ+ friendly. While they may have closed to make way for new endeavors, their innovation has arguably made life easier for the community. They had a mobile app with a curated list of differentLGBTQ+ friendly companies, schools, and establishments so that the community can easily track these down with a click of a button. The birth of the app came after founder Laurindo Garcia experienced discrimination at Singapore’s Changi Airport. where he was stopped after he revealed that he had HIV. The app can be accessed by everyone living in Southeast Asian cities including Kuala Lumpur, Singapore, Bangkok, and yes, Manila.

3. Company measures for LGBT+ employees in the Philippines are still a work in progress.

There have been companies that have been on fire for not walking the talk. They may advertise that they’re LGBTQ+ friendly, complete with rainbow-colored decorations or slogans on their social media, but internally, they’re not treating their LGBTQ+ employees fairly. Evan Tan, one of the directors of the Philippine LGBT Chamber of Commerce, has narrated instances of discrimination in the workplace in an interview with CNN Philippines.

According to Tan, LGBTQ+ members have been denied employment or asked to tone down (or basically hide) their true orientation. The Philippine Corporate Sogie Diversity and Inclusiveness Index of 2018 has in fact reported that only 17 percent of 100 companies surveyed had anti-discrimination and anti-harassment policies that are explicitly related to sexual orientation, gender identity, and gender expression. Of that 17 percent, all are foreign-headquartered or were BPOs.

One of those in the 17 percent, international outsourcing company TaskUs has implemented measures like providing gender-inclusive restrooms to its employees in all sites in the Philippines, so that they could build a safe environment for all. Discrimination and harassment have also been experienced when it comes to restrooms and even in work issues like equal insurance for all. For instance, employees in same sex partnerships haven’t been able to share their insurance with their partner.

“Building a truly diverse and inclusive workplace is a continuous process. While TaskUs, at least in the Philippines, has zero tolerance against workplace bullying and any form of discrimination, it’s still uncontrollable [in other] cases,” explained Michelle Cordero-Garcia, Vice President of People [Asia]. “Our company leadership continues to listen to our people and keeps an open door, not just in issues related to Sogie or LGBTQ+ but in all issues that may affect their well-being.”

“Diversity and inclusion are part of our culture as a people-first organisation. It’s one of the pillars that make us a ridiculously good environment. We believe no one should be discriminated because of perceived differences such as age, ability, ethnicity, gender, gender identity and expression, religion or sexual orientation. We see and treat our employees equally. We push for Sogie not because of its proven benefits to the business, but because it is what is right, just, and humane thing to do.”

For entrepreneurs and companies who find it difficult to a mindset and workplace that are LGBT+ friendly, Cordero-Garcia has this to say: “Truly sustainable companies know that their people are their greatest asset. Listening to your people, knowing their true needs, advocating causes that are relevant and valuable to them, and making sure that your policies have their well-being on top of mind is not only important. It is critical to the organization’s existence and growth. Companies who choose to be silent and indifferent will eventually find themselves on the wrong side of history. You have to take a stand to be able to move forward.”

4. It is undeniable that a diverse and equal work environment has been beneficial to business.

Cordero-Garcia explained how a diverse and equal work culture has been good for business.

“Numerous studies have shown that a diverse work environment is a key driver of innovation and a critical component for global success,” she pointed out. “When employees feel safe, respected and valued, they become happy and work at their best. They are able to come up with new ideas, they collaborate with their peers better, which, in turn, help the organization thrive.”

She added that when employees feel they need to restrain themselves and pretend to be who they are not, they become demotivated and uninspired. It affects their overall well-being. “We are as good as our employee’s performance and service we provide our customers, so we make sure to make our people the top priority,” she concluded.