President Rodrigo Duterte will use the coco levy fund to support his next top agenda – agricultural reform and poverty alleviation – he said in an interview arranged to preview the State of the Nation Address (SONA). 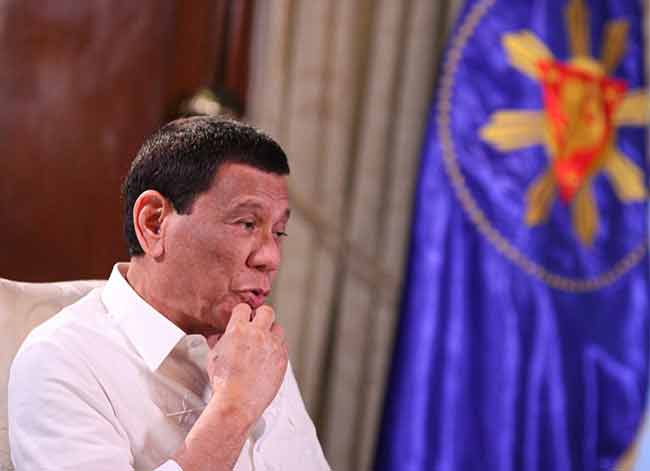 GUARDING VS MISUSE President Rodrigo Duterte grants The Manila Times an interview at the Presidential Room of the Malacañan Palace on Thursday evening. PHOTO BY J. GERARD SEGUIA

Duterte told The Manila Times late on Thursday that progress has been made in the law and order situation and that numerous bills have been passed to improve public health, access to education and infrastructure development.

“But we have to do more in the agricultural sector,” he said, adding later that most of the poor Filipinos were in the rural areas.

The announcement may come as a surprise to some, given that Duterte earlier this year vetoed the

Coconut Farmers and Industry Development bill and a related measure that would have reformed the Philippine Coconut Authority (PCA).

If those bills had passed Congress, the reformed PCA would have been tasked to manage the coco levy funds for programs aimed at helping coconut farmers. But critics have charged that the proposed bills had been “watered down” from their earlier versions as filed in the Senate.

Duterte himself was reportedly disappointed with the lack of safeguards against the possible misuse of that fund.

The fund refers to the tax imposed on coconut farmers beginning in the early 1970s up to the early 1980s.

The money was intended to help coconut farmers develop their industry. Instead, it became a center of controversy because of allegations it was used for personal gain by the cronies of then- President Ferdinand Marcos, who was ousted from office in the 1986 EDSA People Power revolution.

According to the Department of Finance, the coco levy fund has grown to P74.3 billion over the decades.

On Thursday, Duterte told The Times, “Congress must come up with something more rational.” The fund should be put to better use and “spent wisely,” he said, citing research and development as examples.

Returning the fund to coconut farmers will be humanly impossible to do at this point, the President added.

When he campaigned for the presidency in 2016, however, Duterte promised to return the levy fund to coconut farmers. In one sortie, a report even quoted him as saying that he planned to do so in his first 100 days in office.

In this interview, he told The Times, “I don’t think that we would be able to trace everyone who contributed to that fund... That was a long time ago.”

Besides reviving the coconut sector, President Duterte said he would also push for the land use bill, although he later conceded that this would be a long shot. Various versions of the land use bill have failed to pass Congress for over two decades.

Duterte added that he was also for strengthening cooperatives, which he said had been underdeveloped because of corruption, as well as other initiatives that would strengthen the agricultural sector.

Duterte lamented how the coconut industry has suffered over the years, pointing out that an unknown number of trees have been felled and that swaths of farm lands have been cleared for other crops, like palm oil trees.

“There are many uses for the coconut, for which palm oil cannot serve as a substitute,” he also told The Times.

The coconut industry has deteriorated so much over the past decades, from which it may take 10 years to recover, the President said.

If successful, though, the revival of the coconut industry could have a significant impact on the economy.

Some 27 percent of all agricultural lands in the Philippines, or about 3.6 million hectares, are planted to coconuts, according to the 2017 data of the Philippine Statistics Authority (PSA). Coconut trees are planted in 68 of all 81 provinces in the country.

Coconut oil, along with sugar and fruits, is among the country’s top exports. But exports are the weak link in the country’s gross domestic product (GDP), which is a measure of the total or aggregate economy. In the Philippines, 70 percent of GDP is accounted for by consumption, based on reports.

On Thursday, The Manila Times was one of two national dailies invited to interview the President ahead of his next SONA on July 22, which would mark the half-way point of his six-year term. The other paper invited was the Daily Tribune.

“This is the first time, pre-SONA,” he said. “I do not remember having this kind of event before a SONA, but I’d be glad to give you [something] ...”

The discussion covered a wide range of topics, from agricultural reform to the unrelenting drug war to foreign policy challenges, like balancing relations with China and the United States.

When asked which issue preoccupied him most of the time, he said, “Tao [people].” He paused, then added, “Yung mahirap [the poor].”

Duterte said poverty alleviation programs should not end with simply feeding the hungry. Job generation, to him, is paramount, which is the reason behind his focus on a key economic sector such as agriculture.

Earlier in April, the government reported that poverty incidence among Filipinos for the first semester of 2018 stood at 21 percent. That has gone down from 2015, when it was previously reported at 27.6 percent.

Explaining his empathy for the poor, Duterte said that when his family moved to Davao in the 1950s, the city was so backward that the roads were not even paved.

Even though Davao has been developing over the past years, the southern island of Mindanao remains home to most of the Filipinos living below the poverty line, according to the PSA.

Duterte was appointed by then-president Corazon Aquino after the 1986 People Power Revolution to act as officer-in-charge of Davao while serving his term as vice mayor of the city. He became its mayor in 1988 and served until 1998.

Given term-limit restrictions, Duterte was barred from seeking reelection in 1998, but successfully ran for a seat representing Davao in the House of Representatives. Upon completion of that term in 2001, Duterte returned to Davao City and was elected once more as its mayor.

In 2010, Duterte was elected vice mayor, and his daughter Sara served as mayor. Later, in 2013, Duterte returned to the mayor’s office, this time with his son, Paolo, serving as vice mayor.

He is the first President of the Philippines elected from Mindanao.