SEOUL, South Korea: South Korea’s military said North Korea fired two projectiles into the sea Friday and also labeled South Korean President Moon Jae-in ‘’impudent’’ for his decision to have war drills with the US while hoping the denuclearization talks to resume.

South Korea’s Joint Chiefs of Staff said the projectiles launched from the North’s eastern coast flew about 230 kilometers on an apogee of 30 kilometers before landing in waters between the Korean Peninsula and Japan.

The Joints Chiefs of Staff said the US and South Korean militaries were analyzing the launches but didn’t immediately say whether the weapons were ballistic missiles or rocket artillery. 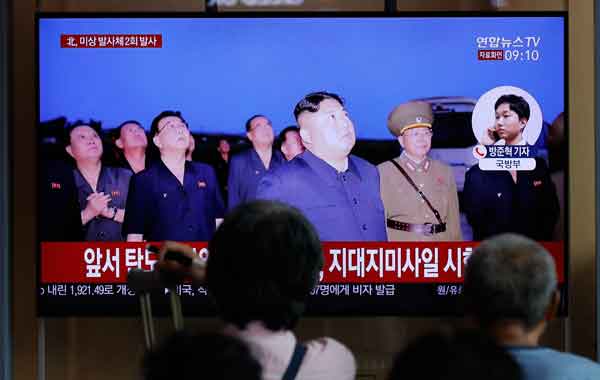 It was North Korea’s sixth round of weapons launches since late July when it began stepping up its weapons demonstrations while expressing frustration over stalemated nuclear negotiations with the United States and continuance of US-South Korea joint military drills that the North sees as an invasion rehearsal.

North Korea also called the South Korean president — who has long favored dialogue with the North — an “impudent guy rare to be found,” for hoping for a resumption of inter-Korean talks while continuing military drills with Washington.

In a speech on Thursday marking the anniversary of Korea’s liberation from Japan’s 1910-45 rule, Moon outlined a goal of “achieving peace and unification by 2045,” although his single five-year term presidency ends in 2022.

“His speech deserves the comments ‘foolish commemorative speech,’” the North said in its statement.

“We have nothing to talk any more with the south Korean authorities nor have any idea to sit with them again,” it added.

Seoul’s Unification Ministry said the North’s comments are not “consistent” with the spirit of inter-Korean agreements, including the Panmunjom Declaration signed by Moon and Kim in April last year.

“We want to clearly point out that [the comments] won’t help the improvement of inter-Korean relations at all,” a ministry official added.

The joint US-South Korea drills have been held for years but were scaled down to ease tensions with Pyongyang.

But the North threatened last week to carry out more weapons tests following the start of the latest joint drills between Seoul and Washington, which began on August 5.

Japan’s Defense Ministry said the North Korean projectiles did not reach the country’s territorial waters or its exclusive economic zone. The White House said it was aware of reports of the launches and was consulting with Seoul and Tokyo.

The weapons the North tested in recent weeks included a new rocket artillery system and what security analysts say are two new short-range mobile ballistic missile systems that would potentially expand the North’s ability to strike targets throughout South Korea, including US bases there.

Experts say President Donald Trump’s downplaying of the North’s launches allowed the country more room to intensify its testing activity while it seeks to build leverage ahead of a possible resumption of negotiations, which could happen sometime after the end of the allied drills later this month.