From runt to rockstar

A wise person once advised not to judge a book by its cover. If you do, you never know that said book you walk away from may have one interesting story to tell. Such was my experience with the 2018 Suzuki Swift. Admittedly, the only model that comes to mind when I hear of the brand is the Jimny, which made headlines as Suzuki’s incredibly compact off-roading vehicle. Not much ado was given to the Swift — understandably because, based on reviews and the occasional Grab ride, the previous generation was not at all impressive. Until now.

I likened the Swift to the updated Mini Cooper that was featured in “The Italian Job” back in 2003 — a car that had a slightly vintage, nostalgic styling, yet has a sporty aura that spoke of taking on the streets in its own little way. What I got was the all-red variant; a deep cherry-red shade that would primarily appeal to women, but one that a man would not be embarrassed to be seen in, either.

Suzuki dubbed this 2018 model as the Swift that “uplifts” you. The fact is it’s actually the Swift that has been uplifted. A quick look around the car tells you that apart from the styling, there are key improvements that have been incorporated. For instance, the front grille and bumper have been given a more aggressive look, clearly designed to show power, but too much that it is all you see, unlike other newer car models that have become all maw and less face. I also like how that shape of the headlamps are well-proportioned to the face of the car, while sitting just along the lines of the hood. This variant comes with 16-inch polished alloy wheels, in a design that, overall, makes the car look premium and fashion-forward from the get-go. 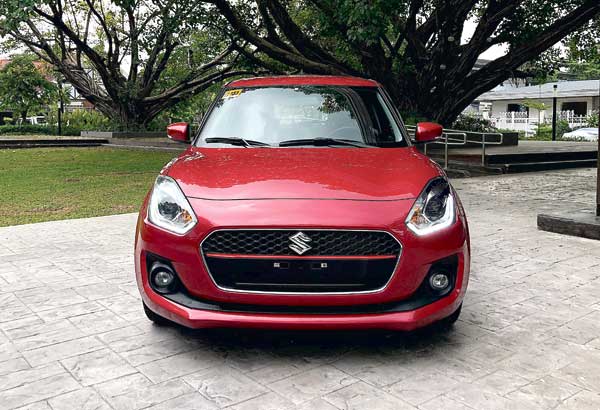 Getting settled inside the car was a no-brainer and quite surprising, as there was more space than it looked like it could afford from the outside. The front seats were bucket-style — the best for ergonomic positioning and to prevent unnecessary sliding. The seats were generous, in the sense that there is enough wiggle room for the driver or passenger to give a little stretch when sitting in traffic for too long. It also offers lower back cushioning, a support detail that most vehicles forget to incorporate for comfort. In addition, despite the car already being quite small, it still features height adjustment for the driver’s seat, just in case anyone may want that extra view over the hood. 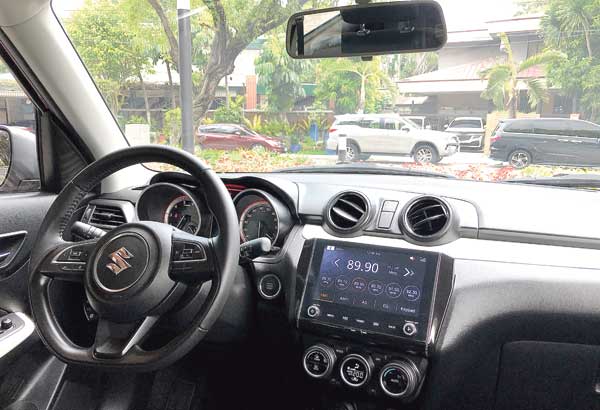 Leg room in the front row is adequate and comfortable. The second row, as expected, is limited, especially for long-legged individuals. That said, the Swift is good to fit average-sized persons, by Asian standards. Taller people may find it a squeeze getting in and out of the car, if only to avoid bumping the ceiling.

In terms of the instrument panel and controls placement, every knob and button was in easy accessible reach, right where you would traditionally expect them to be. Being 2018, I would have expected use of slat-type air conditioning vents throughout the cabin, instead of the vintage rotary design sitting atop the dashboard. The slat-type design would have been more consistent with the modern, premium detail of the interior. 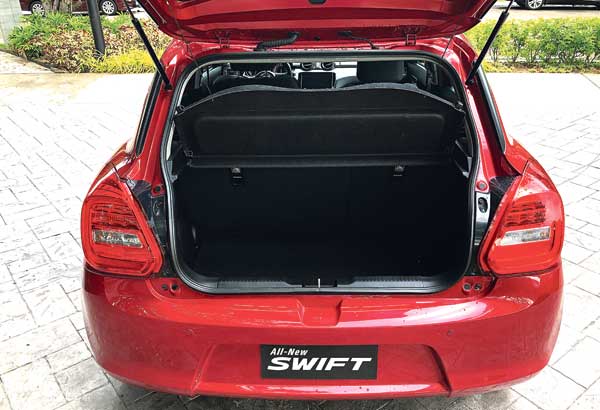 An awkward feature are the cup holders positioned right below the air conditioning controls. True, this is where it is usually found. However, with the limited space afforded in the Swift, it limited the cup height that the area could accommodate. In this case, a 16 oz. Kleen Kanteen tumbler (cap included) would be knocking against the controls just to fit into that space. A tall-sized Starbucks coffee cup would be the easiest to slide in, without any mishaps.

The infotainment system could also use an upgrade. Whenever my smartphone was connected to the system by Bluetooth, the volume of the hands-free could barely be heard. At first, I assumed that it was because the volume on my phone was on low. However, even after turning up the volume of the system and the phone, it remained that same. It was only after completely disconnecting the Bluetooth that I could hear the caller clearly by speakerphone.

Moving on to the rear of the car, the cargo space for the Swift is just right for daily commuting necessities or a weekend grocery run. It could store enough load for an out-of-town weekend drive that includes duffel bags or backpacks and a crate of food items. Taking a trip abroad? Prepare to limit it to about two medium-sized check-in luggage and two carry-on roller bags. Having experience with Tetris would be helpful.

When all was said and done, what really impressed was the drive — which is the most important part, after all. If you read the manual, the 1.2-liter engine under the hood may have been a turn-off. Add to that, it only offers about 82 maximum horsepower. On paper, there isn’t much to say. However, get behind the wheel, start it up, and get going, and the runt turns into a rockstar. Don’t get me wrong — it was no Honda Jazz, even if it handled like one. But what Suzuki got right with this generation Swift is that the proportions of the car in both size and weight were just right for the power output it was equipped with. In that sense, as a driver that is spoiled with having driven more powerful vehicles, I felt the Swift’s need for a light push, but it did not take very long for the car to respond to how fast I needed it to go. 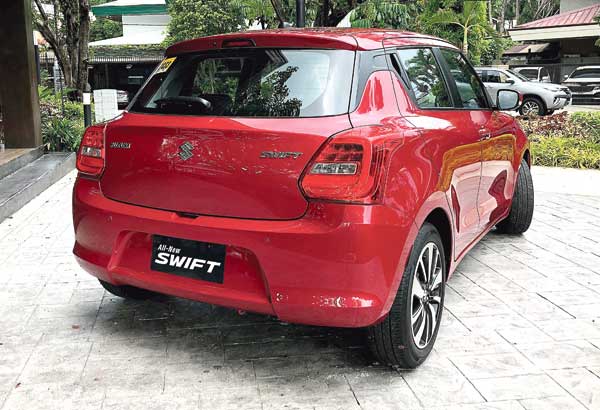 Its response time did not end with the acceleration point. As I mentioned, the handling of the Swift was reminiscent of the Honda Jazz — stable solid, and with enough lightness to make it easy to weave in and out of Manila’s crazy traffic. Power-on, check. Easy manuevering, check.

My expectations for the 2018 Suzuki Swift did not put it on a pedestal. Perhaps, that alone gave it an advantage. Exposure to other people’s reviews gave me my doubts, but the little bugger proved them wrong. The Swift is a contender in its class and its P899,000 price tag does not seem so bad, after spending a few days with me. In spite of the little flaws in the interior, it was impressive. In the end, it was the element of a light, compact body, coupled with a peppy engine made the Swift a car that is perfect for the daily and even that occasional weekend drive out. To close it off, it’s a car that is just right, in almost every way.

TEXT AND PHOTOS BY GENEVIEVE TIU