HAMBURG: England’s Paul Casey ended a five-year wait for his 14th European Tour title with a thrilling one-shot victory at the European Open in Hamburg on Sunday (Monday in Manila).

The 42-year-old, who now plays the majority of his golf in the United States, trailed home hope Bernd Ritthammer and Scotland’s Robert MacIntyre by a single stroke overnight, but fired a brilliant six-under 66 to claim the tournament.

It was Casey’s first win on the European Tour since the 2014 KLM Open in the Netherlands.

That was the last time he had won a professional title until his triumph at the PGA Tour’s Valspar Championship last March, a tournament he successfully defended this year.

Casey, who starred as Europe won the 2018 Ryder Cup in Paris, said he was not sure how he rediscovered his winning touch. 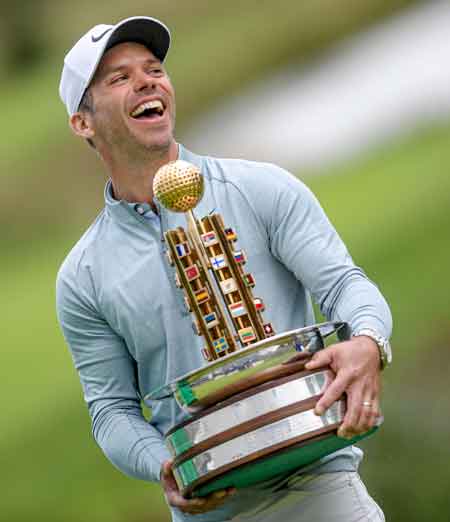 “I’m enjoying my golf, I feel a good understanding of my game -- you can’t figure it out sometimes.

“A lot of those years that I lost were due to injuries and stuff. But who has a career without a blemish. At 42, it’s nice to be somewhere near the top of the game.”

His bogey-free final round, featuring crucial birdies on the 16th and 17th holes, proved enough to beat Ritthammer, MacIntyre and Austrian Matthias Schwab into a tie for second.

World number 924 Ritthammer needed a birdie on the par-five 18th to force a playoff in Germany, but could only manage a par as Casey took the spoils.

Casey now has his eyes on the BMW PGA Championship at Wentworth, where he won the prestigious title in 2009, in two weeks’ time.

“I love that golf course,” he said. “Wentworth is where it started for me. I’m still a member at Burhill, maybe I’ll take it back and have a drink with some friends.

“I’d love to make two out of two for my visits in Europe this year.”