Malacañang has proposed the use of flying ambulances to address reports that some patients being transported to hospitals died on the road because of the traffic jams. 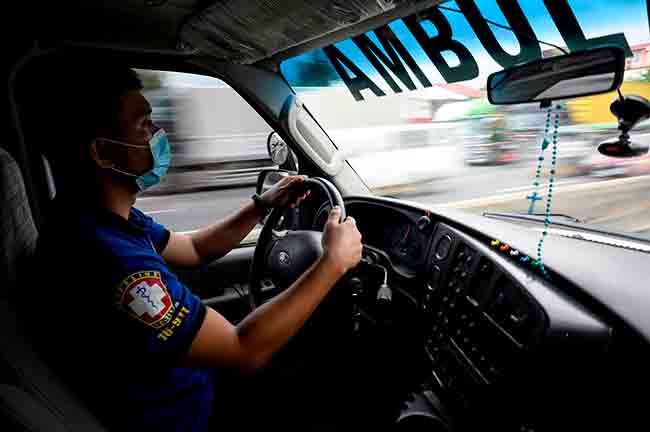 This photo taken on July 18, 2019 shows ambulance driver Joseph Laylo driving along the South Luzon Expressway near Manila. Gridlock in Manila is costing lives as ambulances stuck in traffic face severe delays in the race against the clock to reach the city's hospitals, medics warn. AFP PHOTO

He also urged the Department of Health to consider having choppers “in relation to public service.”

“Perhaps, they should include that in the next budget, where they can ask the help of other agencies that can buy the choppers to be converted into an ambulance,” Panelo said.

Asked if the government had enough helicopters, he said: “Well, we can always utilize the AFP (Armed Forces of the Philippines) with respect to choppers.”

He said reports of patients dying because of clogged roads should prompt senators to grant the President emergency powers to address traffic woes.

“Even patients are dying because the ambulance carrying them could not reach the hospital on time,” Panelo said during a press conference.

“The President will not go down on his knees and plead. They should know what the President needs to solve the problem with respect to this matter,” he added.

Anakalusugan party-list Rep. Michael Defensor, however , had a different solution in mind.

He filed House Resolution 306 last week, urging the executive department to study the implementation of the “ambucycle” system as a nationwide first responder.

“Given the current situation of traffic in the Philippines and the predicament it presents to emergency medical service, there is a need for study on the implementation of alternatives other than the traditional ambulance,” Defensor said.

He said an ambucycle and its medic rider could reach the scene of an accident or the home of a patient in 90 seconds.

“This is significantly faster than the 20 to 30 minutes it could take a traditional ambulance to reach the same destination while dealing with traffic congestion and road closures,” Defensor said.

A study by the Boston Consulting Group noted that Metro Manila motorists and commuters get stuck in traffic for an average of 66 minutes every day.

With a reports from GLEE JALEA