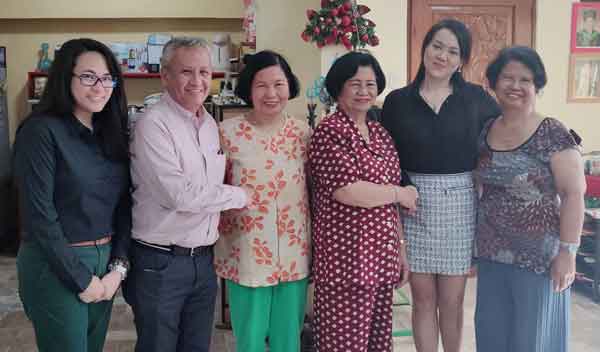 “We have felt the sincere concern and solicitude of China Eastern Airlines. We will still choose to take China Eastern on our next trip. “On August 28, three retired Filipino teachers who had complained about flight arrangements after the impact of the super typhoon “Lekima”( called Hanna in the Philippines) in Shanghai , reached a good understanding with the head of China Eastern Manila Office. “We are satisfied with the hotel accommodation and cabin service of the airline” they said, “It was warm to have someone pick us up at the cabin gate.”

According to reports, on August 9 (New York time), they ended their trip to the United States and took a connecting flight from New York to Manila via Shanghai Pudong Airport. Affected by the super typhoon, the flight diverted to Wuhan Airport for safety. On the evening of the same day (August 10 BJT), the back-up flight flew back to Shanghai Pudong and landed at 00:30(BJT) on August 11. China Eastern actively provided services to the passengers, properly arranged free accommodation and notified passengers to take available follow-up flights from the same day on.

From August 11 to the next few days, the transport capacity of Pudong-Manila was sufficient. 73 passengers affected by the typhoon took flights on selected flight dates. Due to the miscommunication and unwanted situation at the airport, they took a flight a few days later.

China Eastern arranged free accommodation for them. The hotel was equipped with time-limited toll-free for international calls and free Wi-Fi. However, the three elders failed to get in touch with their families due to the mobile phone failure and unfamiliarity with hotel communication methods. Their relatives turned to the Manila media for help.

On August 18, China Eastern Manila Office learned that the three were returning to Manila on Flight MU211. The local office immediately informed their families and sent staff to meet them at the airport. On August 21, after a five-hour drive in the rain, the head of the office visited their home.

Up to now, in addition to the Shanghai Pudong round trip to Manila, China Eastern Airlines has opened round-trip flights from Pudong to Cebu and Clark, providing convenience for Filipino passengers to transfer to the US and other places.