Pacman to do Hollywood movie

In a statement sent to The Manila Times Entertainment, Freedom Fighters — ”an incredible true story of courage, faith and hope in the face of unspeakable Japanese-inflicted terror” — will be co-produced by Philippine-owned Inspire Studios Inc. together with a major US studio. Production is slated for 2020.

Company CEO, producer and financier Francis B. Lara Ho was quoted in the email, “Freedom Fighters will be a global, Hollywood studio-level release. We are currently in discussions with leading Hollywood and Philippine studios, financiers and distributors, as well as ‘A-List’ directors and actors to bring this amazing, inspirational story to the global audience.” 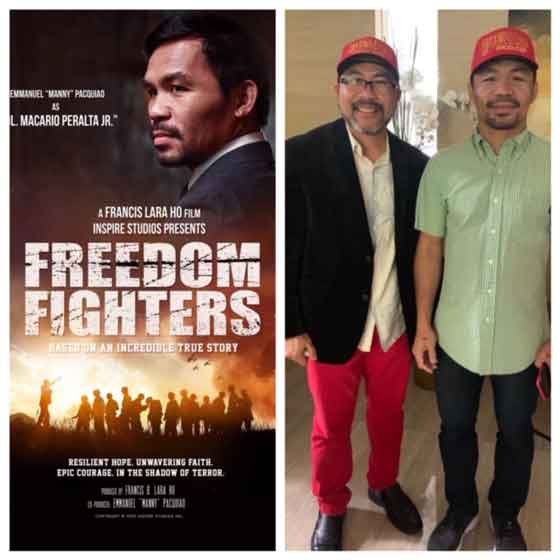 ‘FREEDOM FIGHTERS’ Sen. Manny Pacquiao with Inspire Studios founder and producer Francis B. Lara Ho (left) met to discuss the period film, which will be coproduced by a major US studio.

The executive furthered, “Having the charismatic and beloved Sen. Manny Pacquiao join us to play real life WWII Filipino hero Col. Peralta is an exciting step in putting together a cast of top-tier actors for this movie. Manny is a worldwide hero and admired by people from all over the world, so stepping into this role is a natural for him.”

Inspire Studios, which will hold offices both in the US and the Philippines, is propelled by a great vision for the company.

“We want to impact humanity by creating world class movies of hope, heroism, and honor from stories based on true-to-life events. Movies that go beyond mere entertainment. Those that showcase positive, human virtues. Movies that inspire and stir us to look beyond ourselves, and help us dream to be greater and encourage us to pursue something bigger than life itself,” Ho stated.

Freedom Fighters is based on the memoirs of Louise Spencer, an American who was one of the residents of Hopevale, a community of patriots in Panay Island during WW2 that played a great role during a most crucial time in Philippine history.

After the Japanese sneak attack invasion of the Philippines in WW2 — staged to coincide with the attack on Pearl Harbor — a group of American doctors, nurses, missionaries and miners in Panay Island chose to stay hidden behind enemy lines to continue to help the local people and the Guerrilla Resistance, led by Col. Peralta.

They built a community deep in the jungle called “Hopevale,” and survived there for almost two years under constant threat of torture and execution if captured. They were supported by loyal, brave Filipinos who put their lives and the lives of their families on the line for survival and hold back the Japanese, allowing the triumphant Gen. MacArthur to belatedly return.

For more information about Inspire Studios, log on to www.theinspirestudios.com or email [email protected]