CAPAS, Tarlac: The Philippines regained the title King of Southeast Asia for harvesting the most number of medals in the 30th Southeast Asian Games, the biggest edition in history. 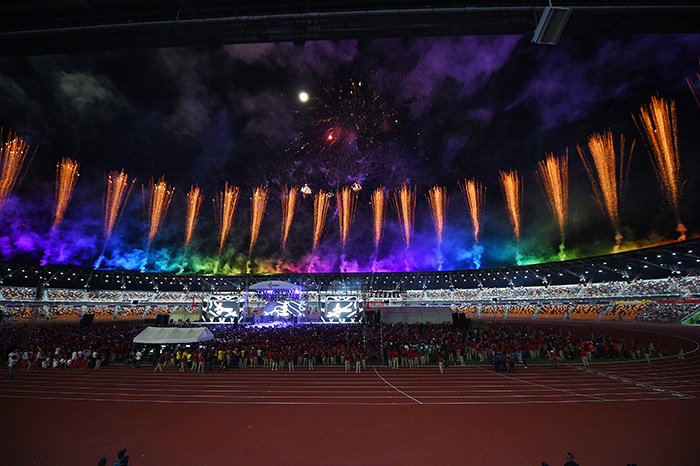 UNTIL THE NEXT GAMES Fireworks light up the New Clark City Stadium where athletes and spectators gathered for the last time to mark the closure of the 30th Southeast Asian Games. PHOTO BY ROGER RAÑADA

This year’s performance was the best since the country joined the SEA Games in 1977.

Arnis, the national martial art and sport, delivered the most number of gold medals — 14. Olympics-bound Carlos Edriel Yulo emerged as the most bemedalled athlete with seven medals.

The Philippine athletics team duplicated its 11-gold feat in the 1983 edition to cap off an impressive 11-8-8 showing at the New Clark City Athletics Stadium in Capas, Tarlac.

The country grooved its way to 10 gold medals while taekwondo grabbed eight golds, boxing and wushu with seven golds each, skateboarding with six, on top of a six-gold sweep in the obstacle course.

The basketball-crazy nation also bagged all golds up for grabs as the Gilas Pilipinas finished with four golds, sweeping the 3 by 3 and 5 by 5, both in men and women’s events.

“It is a happy day for the Philippine Sports Commission, Team Philippines and the country as we celebrate our return to SEAG supremacy. We all worked hard for this. The Philippine Olympic Committee, national sports associations, the organizing committee, the government, the private sector, and the Filipino people all came together to show our team that they have the whole nation behind them. Salamat po sa lahat,” said Philippine Sports Commission Chairman and Chef de Mission William Ramirez.

“I am overwhelmed by the performance of our athletes in the 30th SEA Games. They showed us that with proper support and encouragement, they will deliver. I am proud that they proved that my faith in them was well-placed. But this is just the beginning,” said Philippine Olympic Committee president Abraham Tolentino.

“These Games are not only about medals. It is about character, resilience, love for one another and shoring up the faith of the person next to you,” Ramirez said.