The death toll in last Sunday’s earthquake in Davao del Sur stood at six on Monday as strong aftershocks slowed down the search for more bodies under the debris of collapsed structures. 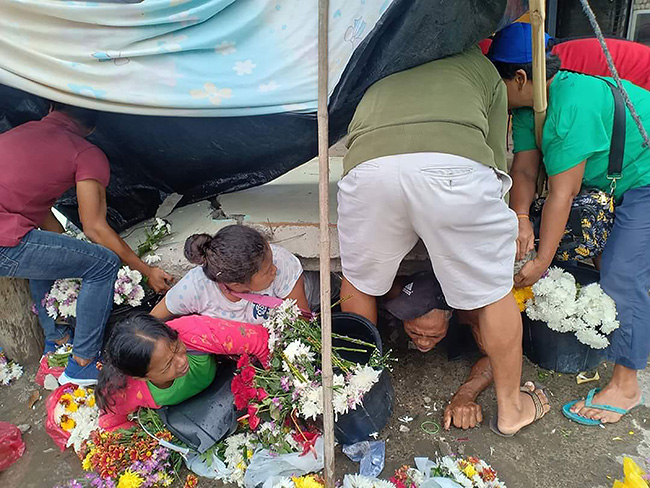 Among the latest fatalities is a woman in her 70s, who was found to have suffered a heart attack during the magnitude 6.9 tremor, the Bureau of Fire Protection (BFP) reported.

On Sunday, a six-year-old girl died after a wall in her house in Barangay Asinan of Matanao, Davao del Sur, fell on her.

Also in Matanao, three bodies were pulled from the rubble of a collapsed commercial-residential building. Two were identified by the Davao del Sur Provincial Disaster Risk

Reduction and Management Office as Elsa Ababon, 52, and Vangie Artiaga, 67, the wife of a former barangay (village) captain of Tanwalang Sulop village.

Rescuers used heavy equipment and their bare hands as they searched for survivors.

Searchers pulled survivors from the collapsed market building in the town of Padada, but were still looking for a person who had texted authorities saying six people were trapped under the rubble.

“The person can no longer be reached,” fire official Fred Trajeras told reporters, adding that rescuers’ held out hope survivors could be found.

Lesley Jane Gatos, 31, was among those pulled from the rubble on Sunday, shortly after the tremor.

Gatos used her phone to call for help and then began making noise to attract the attention of rescuers, who reached her after clearing a path in the debris.

“Finally I was able to get out. I saw people. They clapped because I was the first one rescued,” she told Agence France-Presse.

Christopher Tan, who heads the Provincial Disaster Risk Reduction and Management Office, said six people have been rescued from the ruins of the Southern Trade grocery store on the building’s ground floor.

Tan said 16 persons were injured when the building, which also housed a school supplies store and residential units, collapsed.

He said the rescue work was hampered by aftershocks. It could not be determined how many more people were trapped in the building.

The BFP said the number of people injured throughout the province totaled 84.

Among the partially damaged structures are the Kiblawan Municipal Hall, Kiblawan Public

Market and the Bansalan Municipal Hall.

Power was out in the Davao del Sur towns of Kiblawan, Matanao, Magsaysay, Padada and Digos City.

At least nine schools were damaged beyond repair, the Department of Education (DepEd) reported Monday.

Eight of the schools were in the Davao Region and one in Region 12 (South Cotabato, Cotabato, Sultan Kudarat, Sarangani and General Santos City).

Mindanao has been jolted by three strong tremors ranging from magnitude 6.3 to 6.6 in October.

Phivolcs said it was checking if Sunday’s earthquake is linked to the ones in October.

It added that the latest tremor might have been triggered by movements in the Digos, Makilala-Malungon and Tangbulan Faults.

The Philippine National Police (PNP), meanwhile, said it would recommend to local government units the closure of quake-weakened structures in the stricken areas.

PNP chief of Operations Lt. Gen. Camilo Cascolan told reporters on Monday he had directed the logistics officers in the Davao Region to start inspecting buildings for quake damage.

The Catholic Bishops Conference of the Philippines appealed for prayers for and support to the victims and survivors of the Davao del Sur tremor.

Manila Archbishop Antonio Cardinal Tagle also on Monday made the call during the first dawn Mass at the Manila Cathedral in Intramuros, Manila.

“Let us remember our brothers and sisters in Mindanao, who experienced an earthquake that is even stronger than the previous ones,” Tagle said.

“The nation will show that despite the earthquake, we have faith — the essence of Simbang Gabi. We keep the faith and believe that Jesus, the Lord will come and save us,” he said.

WITH FRANZ LEWIN EMBUDO, DARWIN PESCO AND WILLIAM B. DEPASUPIL