President Rodrigo Duterte has ordered a 24/7 response to the victims of Sunday’s earthquake in Davao del Sur “to make sure that everyone is safe and are ready for possible aftershocks.” 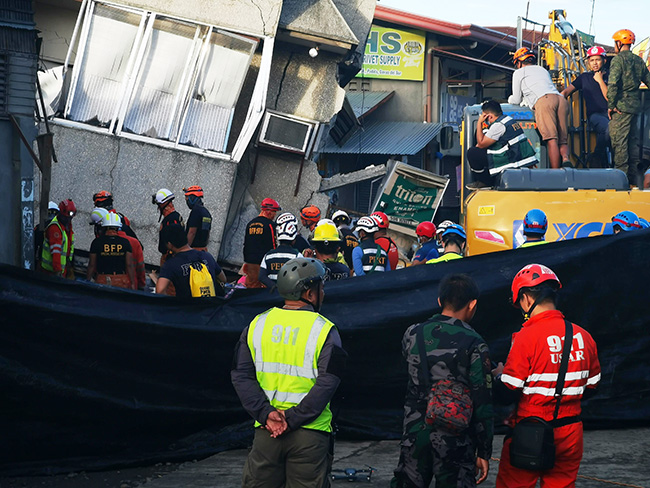 Rescuers search for survivors of a collapsed building after a 6.8-magnitude earthquake struck Padada town, Davao del Sur province in the southern island of Mindanao, Philippines on December 16, 2019. - A powerful earthquake hit the southern Philippine island of Mindanao on December 15, killing a child and damaging buildings in an area still recovering from a string of deadly quakes in October. (Photo by Ferdinandh CABRERA / AFP)

In a statement on Monday, Cabinet Secretary Karlo Alexei Nograles said the President “is closely monitoring the progress of ongoing operations to thoroughly evaluate the damage of the quake and all ground units are ordered to work round-the-clock to make sure that everyone is safe and are ready for possible aftershocks.”

“We will definitely provide all the assistance needed for the family of the lone fatality,” Nograles added, referring to the six-year-old girl who was trapped under a collapsed wall.

“Medical assistance is also being provided for the 37 people who are initially listed as injured as a result of the powerful quake.”

Security forces have been deployed to ensure that all those who are in evacuation centers are safe and the properties that they left behind are protected, he said.

Nograles noted that local disaster reduction and response units had created community-based frontline emergency responders in anticipation of future earthquakes and other disasters.

“And while we are still fortunate to have very minimal casualties in the series of earth movements that jolted many parts of Mindanao, this pattern of unfortunate events has prompted our local disaster reduction and response units to create community-based frontline emergency responders,” he said.

“Each sitio, or each barangay nationwide, should have well-trained emergency responders

and all communities should be taught how to properly respond during all type of disasters and emergencies,” Nograles added.

He also urged the public to pray for the immediate recovery of the injured victims.

Malacañang said President Duterte and his family were unharmed by the recent earthquake.

Duterte was in his house in Davao City with his daughter Veronica, while his partner Cielito “Honeylet” Avanceña was on her way home when the ground shook.