Survivalism or prepping, in its simplest definition, is preparing for emergencies whether personal, national or global. 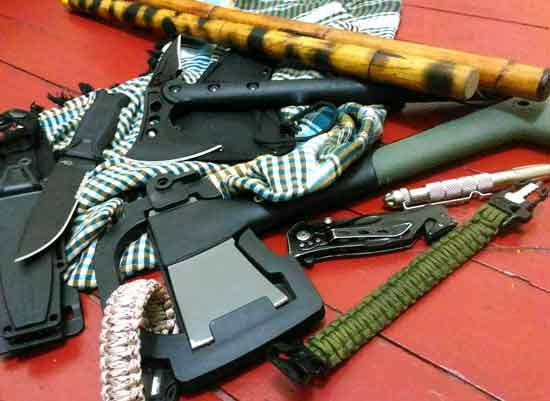 FMA is the best martial art for survivalists for the reason that it teaches one how to fight with
weapons (bladed, impact and projectile) and empty hands. CONTRIBUTED PHOTO

I would say that survivalism entered mainstream consciousness in 2012, when many believed that the world will end according to the Mayan calendar. Predictions of cataclysmic events in 2012 gave birth to reality television shows like National Geographic’s Doomsday Preppers which aired from 2011 to 2014.

Survivalism also owes its current level of popularity to a number of personalities. Foremost among them is Bear Grylls.

Grylls, who, turned survivalism into sport, was featured in various reality television shows, the most popular of which was Man vs Wild wherein he pits his survival skills against the most inhospitable places in the world.

Lambert employed his military skills to elude manhunts organized by various law enforcement and military units around the world (Lambert named the episode shot in the Philippines as one of the toughest in the series).

On the other hand, Stafford in comparison with his contemporaries, upped the ante by jumping into survival situations totally naked with only a satellite phone and an emergency medical kit as his lifeline (first series of Marooned).

Survivalism is nothing new to practitioners of kali, escrima and arnis collectively known as Filipino martial arts (FMA). The philosophy that one must survive against all odds is part and parcel of FMA long before the term “prepping” was coined.

Self-reliance is the essence of FMA and its adepts are known to fight and prevail using any weapon whether it’s an exotic blade or a rolled up magazine.

Latosa, using an itak, recently competed in History Channel’s “Forged in Fire: Knife or Death,” wherein contestants, armed with bladed weapons of their choice, go through an obstacle course that include wood, sandbags, animal carcasses and ice.

Survivalism as a natural extension of FMA is also evident in the fact that a lot of FMA masters are active writers in survival publications among them Jared Wihongi of Pekiti Tirsia Kali and Harley Elmore of Sayoc Kali.

The heart of survivalism is the concept of every day carry or “EDC” in preppers talk. These are tools and supplies that you have on your person all the time that you will need to survive an emergency. Three useful items that could fit in your pocket are a small knife (FMA guys always carry a knife), a disposable lighter and a paracord bracelet. Survivalist Pat B explains why: “This is a small selection of gear that can accomplish the three basic skills that have been helping humans to survive for untold millennia. These skills are cutting, tying and burning. With these skills covered, you can start a fire for warmth, you can cook, and you can make water safe to drink. You can improvise shelter, catch fish and small game, fix a broken shoe lace or pack strap, or create weapons to defend yourself. With these skills, and a well-stocked cranial survival kit (chock full of knowledge), you can improve your odds in almost any circumstance.”

In addition to EDC, another survival essential is the bug-out bag or “BOB.” You may have stockpiled essential supplies in your house but circumstances may force you to leave your abode hence the need for a BOB that contains what you need while on the run. A BOB should contain first aid kit, first-aid manual, space blankets, lighters, knife, whistle, ready-to-eat food, bottled water, water purification tablets or water filtration device, rope, flashlight, batteries, hand cranked radio, solar cellphone chargers and cellphone (communication is of utmost importance) and some cash.

Don’t forget that in an emergency, you will depend a lot on your physical strength to save yourself and your loved ones hence the importance of conditioning.

“Should a crisis strike, those in its aftermath would need the ability to meet the significant physical challenges that are bound to stand in the way of a family’s recovery. It would require some WALKING, and potentially for significant distances. It would require LIFTING. A crisis might require some CLIMBING. Each of those tasks would certainly require some strength and a decent amount of endurance ... If a crisis forces the family to move, the go-bag can’t be left aside. If a family includes a young child or two, there’s a good chance those youngsters will be carried for decent portions of the trek. It’ll take some strength. It’ll take some stamina,” wrote James D. Nowka in his book Surviving Natural Disasters.

Finally, you must be able to know how to fight. Breakdown of law and order always follows a natural disaster. This has been proven during Hurricane Katrina in the US in 2005 and Super Typhoon Yolanda in the Philippines in 2013. If you own supplies, you are a target and if you can’t fight you are dead.

I would opine that FMA is the best martial art for survivalists for the reason that it teaches one how to fight with weapons (bladed, impact and projectile) and empty hands. It is a testament to the efficacy of FMA that its techniques are now taught and used by various military and law enforcement organizations around the world.