Evacuees from the danger zone around Taal Volcano will be allowed to return to their homes to feed their pet animals and livestock.

Col. Edwin Quilates, Batangas provincial police chief, said the locked-down areas in the province were given three to four hours to tend to their pets and clear the volcanic ash carpeting their homes. 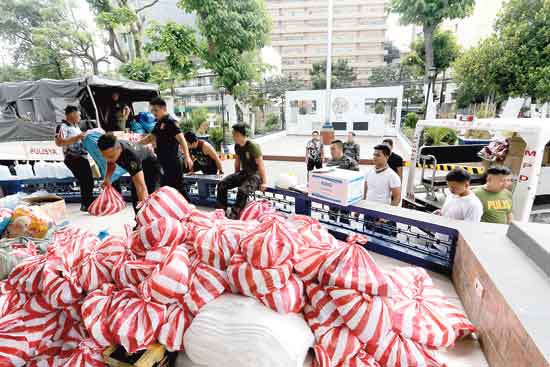 TRUCKLOAD OF GOODS FOR TAAL VICTIMS Manila police load their trucks with relief goods to be delivered to the victims of the Taal Volcano eruption. Taal erupted on January 12. PHOTO BY ENRIQUE AGCAOILI

Quilates said residents of Agoncillo town could return to their homes from 6 a.m. to 10 a.m. and those of Tanauan City from 5:30 a.m. to 8 a.m. on Sunday.

Quilates said evacuees who want to bring out their animals from the danger zone must find temporary shelters for them.

“They cannot transfer the livestock to their evacuation centers because it would take a lot of space. But they can visit the animals and feed them if window hours were provided to them by their respective areas,” he said in an interview over DZBB radio.

Quilates added that security in the 14-kilometer danger zone had been intensified and entry was restricted.

He said a nongovernment organization forgot their relief goods in Tanauan, noting that he gave them three hours to retrieve the goods.

Relief continued to pour for the evacuees, according to Defense Secretary Delfin Lorenzana, who is also chairman of the National Disaster Risk Reduction and Management Council.

Countries that provided assistance include South Korea, Taiwan and China.

Lorenzana said most of the aid came from other local government units.

Lorenzana did not say what form of assistance Taiwan provided.

The Department of Environment and Natural Resources (DENR), meanwhile, reiterated its appeal to the public to help rescue wildlife fleeing the wrath of Taal.

In a statement over the weekend, DENR Undersecretary Benny Antiporda said the public must immediately turn over to authorities any animals they see or unintentionally.

Antiporda made the appeal after a rufous hornbill was turned over to him by Cavite Educators Lions Club member and Bacoor City resident Flor Locson, who suspected the bird came from TVPL.

The rufous hornbill (Buceroshydrocorax), locally known as kalaw, is found only in the Philippines. It is on the Red List of the International Union for Conservation of Nature as a vulnerable species, which means the bird is near threatened.

On Sunday the Philippine Institute of Volcanology and Seismology (Phivolcs) noted that there was a lull in Taal Volcano’s activity.

“Activity in the main crater in the past 24 hours has been characterized by steady steam emission and infrequent weak explosions that generated white to dirty white ash plumes 500 to 1000 meters tall and dispersed ash southwest of the Main Crater. Sulfur dioxide emission was measured at an average of 1442 tonnes/day,” Phivolcs said in its bulletin.

It added that 25 small volcanic earthquakes were detected, lower than the 32 the previous day.

“Such intense seismic activity likely signifies continuous magmatic intrusion beneath the Taal edifice, which may lead to further eruptive activity,” the bulletin read.

Despite the downtrend in volcanic activities, Phivolcs Volcano Monitoring and Eruption Prediction Division chief Mariton Bornas is not discounting a major explosion.

“The number of volcanic quakes are lower, but again, we are recording volcanic earthquakes — low frequency events — that are signs of magma itself. It is not like other earthquakes that merely break down rocks of magma,” Bornas said in a press briefing on Sunday.