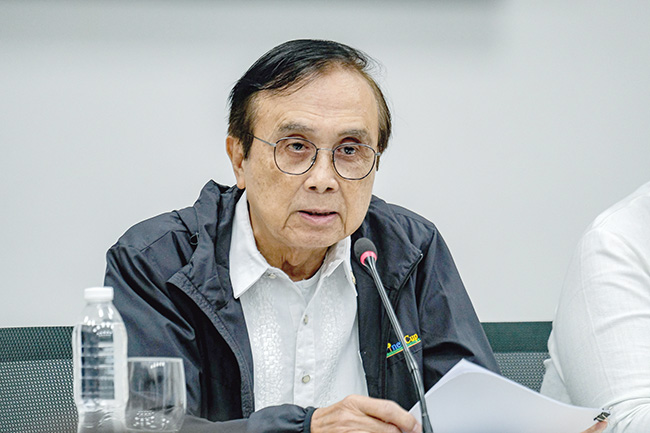 Socioeconomic Planning Secretary Ernesto Pernia speaks during a briefing after the Economic Development Cluster meeting at the Department of Finance headquarters in Manila on March 10, 2020. (Photo by Joan Arellano)

THE government should implement measures that streamline processes to facilitate trade amid the coronavirus disease 2019 (Covid-19) outbreak to ensure that the country’s external sector would rebound quickly, the National Economic and Development Authority (NEDA) said on Wednesday.

In a statement, Socioeconomic Planning Secretary Ernesto Pernia urged the government to “further intensify its trade efforts to minimize the impact from reduced external demand and manage timely recovery.”

“This [as] we are preventing the spread of Covid-19 with continued vigilance and implementation of health measures,” he added.

According to the NEDA chief, relevant government agencies should consider measures that would streamline procedures and facilitate trade, and reduce transaction costs.

“In consultation with the private sector, the government should ease [the] implementation of some regulations that will allow firms to manage costs and provide financing or loan restructuring to micro and small enterprises, whose operations may have already been affected,” Pernia said.

He cited measures that were instituted to remove administrative constraints on imports of agricultural products under Administrative Order 13 series of 2019.

These include streamlining procedures and requirements in accrediting importers and minimize the processing time of applications for importation; exempting accredited traders from registration requirements; and reducing transaction and cargo fees for a limited period.

Relevant government agencies may institute similar measures, according to Pernia.

The NEDA chief said the Anti-Red Tape Authority might play a crucial role in helping businesses lower their production costs by fast-tracking the review of procedures of certain agencies, such as the Food and Drug Administration of the Philippines, to allow the introduction of new and innovative products to local and foreign markets.

The government, in coordination with exporters, can also facilitate the identification of new sources and markets, as well as diversification of its products to manage vulnerabilities, he added.

“In the longer term, emphasis must be placed on developing backward and forward linkages that will encourage production of raw materials and intermediate inputs — as well as onward processing to finished products — in the domestic market to reduce reliance on foreign suppliers,” Pernia said.

NEDA’s statement came a day after Philippine Statistics Authority data showed that the country’s trade deficit narrowed in January from a year ago, but widened from the month before.

Inbound shipments grew by 1 percent to $9.28 billion year-on-year, while outbound ones increased by 9.7 percent to $5.78 billion.