WASHINGTON, D.C.: Joe Biden, the presumptive Democratic presidential nominee, was declared winner of the Alaska primary late Saturday (Sunday in Manila) after the state shifted to postal voting due to the coronavirus pandemic. 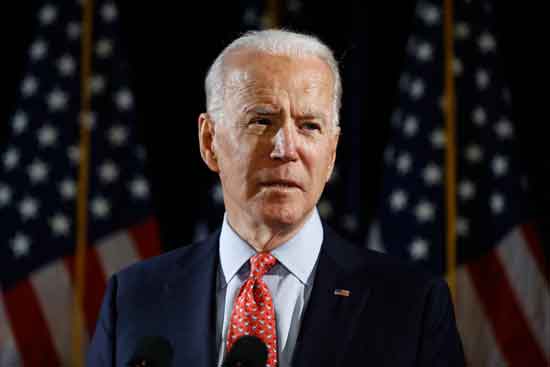 The state’s ballots were sent out before Biden’s rival Vermont Sen. Bernie Sanders pulled out of the race last week. The Vermont senator also took a proportion of the vote.

But Biden emerged as the clear winner with 55.3 percent of the vote and nine of the state’s 15 delegates, Alaska Democrats tweeted from the party’s official account.

Sanders took 44.7 percent of the votes and eight delegates, according to the tweet.

He has stressed he will remain on the ballot and seek to gain as many delegates as possible in order to “exert significant influence” over the direction of the party.

Biden, like most Americans, is under stay-at-home orders due to the global coronavirus pandemic, and has marked becoming the de facto 2020 nominee with press releases and comments broadcast online from his basement.

He has urged Sanders supporters to join his campaign, which already has the backing of nearly all other ex-rivals in the race including senators Kamala Harris and Amy Klobuchar, and former Indiana mayor Pete Buttigieg.

Biden faces the most important decision of his five-decade political career: choosing a vice president.

He expects to name a committee to vet potential running mates next week, according to three Democrats with knowledge of the situation who spoke on the condition of anonymity to discuss internal plans. Biden, a former vice president himself, has committed to picking a woman and told donors this week that his team has discussed naming a choice well ahead of the Democratic convention in August.

Selecting a running mate is always critical for a presidential candidate. But it’s an especially urgent calculation for the 77-year-old Biden, who, if he wins, would be the oldest American president in history. The decision carries added weight amid the coronavirus pandemic, which, beyond its death toll, threatens to devastate the world economy and define a prospective Biden administration.

“We’re still going to be in crisis or recovery, and you want a vice president who can manage that,” said Karen Finney, a Democratic strategist who worked for Hillary Clinton’s 2016 campaign. The vice president is “always important,” Finney added. But she pointed to Biden’s role in the Obama administration’s 2009-10 recovery efforts as evidence that a crisis makes the choice of a running mate an even “more important decision than usual.”

Biden faces pressure on multiple fronts. He must consider the demands of his racially, ethnically and ideologically diverse party, especially the black women who propelled his nomination. He must balance those concerns with his stated desire for a “simpatico” partner who is “ready to be president on a moment’s notice.”

The campaign’s general counsel, Dana Remus, and former White House counsel Bob Bauer are gathering information about prospects. Democrats close to several presumed contenders said they have not yet been contacted.

Biden has offered plenty of hints. He’s said he can easily name 12 to 15 women who meet his criteria, but would likely seriously consider anywhere from six to 11 candidates. He’s given no indication of whether he will look to the Senate, where he spent six terms, to governors or elsewhere.

Some Biden advisers said the campaign has heard from many Democrats who want a woman of color. Black women helped rescue Biden’s campaign after an embarrassing start in predominately white Iowa and New Hampshire. Yet there’s no firm agreement that Biden must go that route.

“The best thing you can do for all segments of the population is to win,” said Biden’s campaign co-chairman Cedric Richmond, a Louisiana congressman and former Congressional Black Caucus chairman. “He has shown a commitment to diversity from the beginning. But this has to be based on, like the VP says, who he trusts.”