Residents in areas under general community quarantine (GCQ) can resume work, but they should continue to observe protocols mandated by the Department of Health such as physical distancing, Malacañang said on Thursday. 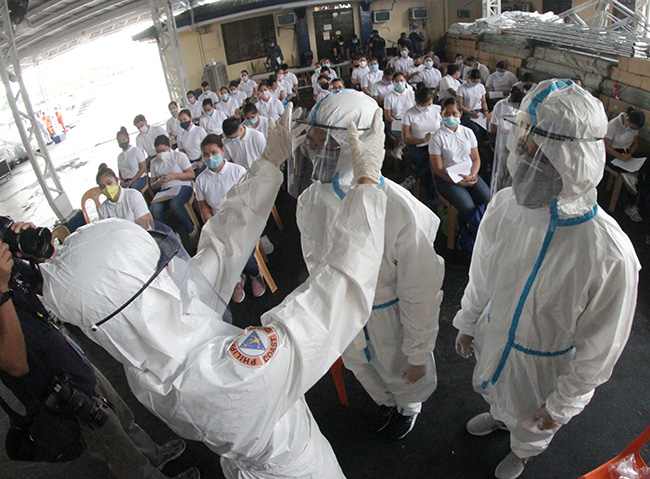 GETTING IT RIGHT A Coast Guard official demonstrates the proper donning of a personal protective equipment to newly hired medical technologists in Manila. PHOTO BY RENE H. DILAN

President Rodrigo Duterte approved the recommendation of the Inter-Agency Task Force for the Management of Emerging Infectious Disease (IATF-EID) to allow essential work and religious gatherings so long as strict physical distancing rules were observed.

Those who attend such gatherings must wear face masks or other protective equipment during the entirety of the event, he added.

Roque said all other mass gatherings were still prohibited in areas under the GCQ.

Interior Secretary Eduardo Año said the IATF did not agree on the number of participants allowed to attend essential gatherings, but noted that the standards set by the government should be met.

The government previously announced the imposition of a GCQ beginning May 1 in areas with low to moderate risk to the coronavirus disease 2019 (Covid-19) infection.

In these areas, public transportation will resume at reduced capacity, some workers would be allowed to work, and some establishments would partially open, but subject to minimum health standards.

A 50-percent onsite work and 50-percent work-from-home scheme may also be imposed in the following industries: financial services, business process outsourcing, non-leisure wholesale and retail trade, and other non-leisure services.

Areas with high-risk Covid-19 infection like Metro Manila, on the other hand, will remain under enhanced community quarantine until May 15.

Meanwhile, Roque clarified that senior citizens would be allowed to leave their homes for essential activities, including buying of food and reporting for work, during the quarantine period.

“Any person below 21 years old; those who are 60 years and above; those with immunodeficiency, comorbidities or other health risks; and pregnant women, including any person who resides with the aforementioned shall be required to remain in their residences at all times, except when indispensable under the circumstances for obtaining essential goods and services or for work in permitted industries and offices,” he said, citing the IATF guideline.

The Palace official reminded the elderly of their vulnerability during the coronavirus pandemic.

“Hindi naman kayo completely kulong pero uulitin ko sa pag-aaral, especially vulnerable ang elderly. Pwede kayo lumabas para kumuha ng essential goods and services at magtrabaho sa mga pinapayagang industriya (You will not be completely locked up, but I repeat that studies show the elderly people are vulnerable. You may leave the house to get essential goods and services and work in authorized industries),” he said.

The government is studying the gradual easing of quarantine rules once the country achieves its daily testing target for the coronavirus disease 2019 (Covid-19), a Cabinet official said on Thursday.

Without waiting for symptoms to manifest, a patient who tests positive can be immediately isolated and treated, he said.

On Tuesday, National Task Force Covid-19 chief implementer Carlito Galvez Jr. said the government was planning to conduct 20,000 tests daily by May 15, when the enhanced community quarantine (ECQ) in some areas are scheduled to be lifted.

The government will prioritize Metro Manila, which Galvez described as the “center of gravity” of the pandemic in the country.

“We consider that the NCR (National Capital Region) is the epicenter considering that it has the affectation of 70 percent and we believe that the NCR is the center of gravity,” Galvez said.

The government is coordinating with the Philippine Red Cross in doing the tests, according to Galvez.

With the Red Cross’s help, the 15,000 target for testing in Metro Manila can be reached, he said. “We believe that if we’ll be able to test the NCR and Region 3 and 4, 80 percent of the problem will be solved,” he said.

Meanwhile, Roque said the government issued the guidelines for the transit of people and goods between areas under ECQ and GCQ, as well as those not in quarantine to a GCQ or ECQ areas.

He said the non-essential entry and exit of people to and from the ECQ zone shall be prohibited with certain exemptions.

Among those exempted are health workers, government officials and government frontline personnel, those traveling for medical or humanitarian reasons, workers in permitted establishments and persons providing essential goods and services and public utilities, essential skeletal workforce, repatriated overseas Filipino workers (OFWs) and non-OFWs returning to their residences, and other persons transported through the national government efforts subject to quarantine protocols.

The movement of all types of cargo by land, air or sea within and across areas placed under ECQ or GCQ must remain unhampered, Roque said.

On Thursday, 20 Covid patients were reported to have recovered, the highest figure in two weeks.

The figure brings the total recoveries to 1,043, the Department of Health (DoH) said.

The DoH attributed the uptick in the recovery rate to its new directive to also count patients with mild symptoms who had undergone the 14-day home quarantine.

An eighth or 1,619 of all cases are health workers, according to Health Undersecretary Maria Rosario Vergeire.

Vergeire said 557 of them are doctors, 604 are nurses, and the rest are other medical staff.

The death toll stood at 568, after 10 more deaths were added Thursday.

Thirty-three of the fatalities were medical workers — 24 doctors and seven nurses.