MILLIONS of employees are expected to lose their jobs in the coming weeks as 78 percent or 79,550 of the 102,000 establishments affected by the coronavirus disease 2019 (Covid-19) declared that they would be temporarily closed for six months, the Department of Labor and Employment (DoLE) said on Thursday. 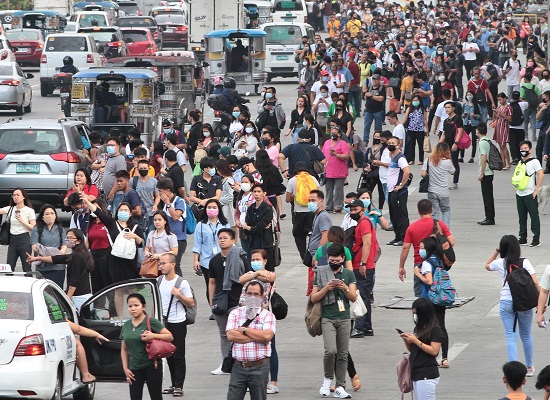 Workers wait for a ride on Monday along the corner of NAIA road and Roxas Boulevard. PHOTO BY MIKE ALQUINTO

She noted that of this number, 1.9 million were from the formal sector.

“What we fear is slowly becoming a reality. Those establishments that reported to us their flexible work arrangement or temporary closure have already sent feelers that they might close permanently because of the huge effect of Covid-19 in their operations,” Tutay said in a radio interview.

“There are some [establishments] who have sent letters informing us that they will retrench their employees in the coming days or months,” she added.

Based on DoLE records, there are 2.9 million formal sector workers coming from 102,000 establishments nationwide that are currently under flexible work arrangement or on temporary work closure (TWC).

Of the 102,000 establishments, 78 percent or 79,560 are temporarily closed, while the remaining 22 percent or 22,440 companies are under flexible work arrangement, which means the workers’ income have been reduced.

Establishments that are under TWC are given six months to resume their operations.

Those that will be unable to resume operations after six months would be considered permanently closed.

“That is what we don’t like to happen, that firms on temporary work closure will become permanent closure. We are talking here of 1,9 million [formal sector] workers,” Tutay said.

She added that aside from the proposed economic stimulus package now pending in the Senate and House of Representatives, the Labor department proposed a wage subsidy for affected businesses to preserve jobs.

“The money will go directly to the payroll account of employers on the condition that they will retain their workers,” she said.

But Tutay said the Labor department had requested for the regular implementation of the Tupad program, which provides workers in the informal sector a 10-day emergency employment.

Also on Thursday, the DoLE said the AKAP program is on again after it was able to generate another P1 billion, which would enable the department to assist 250,000 more workers.

The fund came from the DoLE’s 2020 budget to further provide assistance to OFWs. There are 450,000 OFWs applying for assistance from the AKAP program.