The Supreme Court on Tuesday ordered Malacañang to explain why it terminated the country’s Visiting Forces Agreement (VFA) with the United States without the concurrence of the Senate. 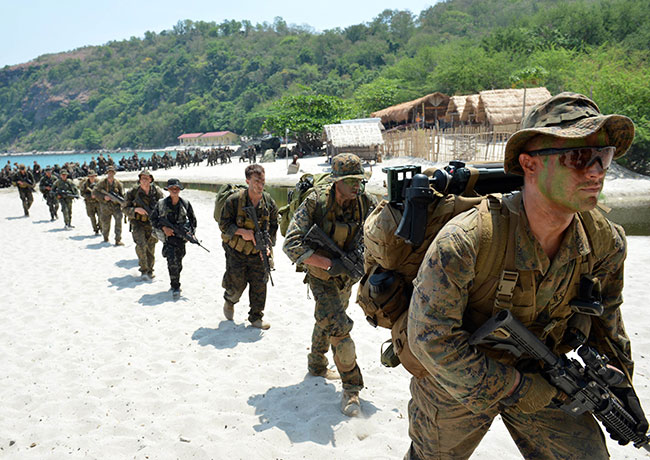 FORWARD MARCH In this April 15, 2013 file photo, US marines walk along a beach, simulating a boat raid during the annual joint Philippine-US military exercise at a Philippine marine base in Ternate, Cavite. AFP FILE PHOTO

Well-placed sources of The Manila Times said the high court directed the Palace to file its comment on the petition of several senators, asking the tribunal to rule on whether the chamber’s concurrence is necessary in the abrogation of a treaty.

The high court gave the executive department 10 days to submit its comment.

The Supreme Court also wanted Executive Secretary Salvador Medialdea and Foreign Affairs Secretary Teodoro Locsin Jr. to give their input on whether or not President Rodrigo Duterte can abrogate a treaty without the ratification of the Senate.

The senators asked the high court to declare that a treaty previously concurred in by the Senate should require the concurrence of at least two-thirds of the members of the chamber if it were to be terminated.

The senators also requested the Supreme Court to order the executive branch to send the withdrawal notation to the Senate for voting.

The petition was filed after the Philippines sent on February 11 a notice of withdrawal of the VFA  to the US Embassy in Manila.

Under Article IX of the VFA, the withdrawal of American troops should take effect within 180 days from the receipt of the notice of withdrawal.

“As such, the Senate has until Aug. 9, 2020 or the 180th day from the Notice of Withdrawal within which to question the unilateral withdrawal by the President (Duterte) from the VFA,” the senators said.

The President terminated the treaty between Manila and Washington after the US canceled the visa of Sen. Ronald dela Rosa.

The senators said the petition does not intend to undermine the President’s prerogative of implementing the country’s independent foreign policy.

“Specifically, the petition seeks to address the issue of whether the foregoing constitutional provision requiring the concurrence of at least two-thirds of all the members of the Senate also applies to termination of or withdrawing from treaties that have been validly ratified by the President and concurred in by the Senate,” they said.

Recently, 12 senators voted to adopt Senate Resolution 337 asking the Supreme Court to rule on whether or not the concurrence of the Senate is necessary in the abrogation of a treaty or international agreement.