The government’s chief lawyer on Sunday slammed ABS-CBN Corp. for spreading what he said was fake news that the closure of the network would leave more than 11,000 employees jobless.

The media giant closed its radio and TV operations a day after its franchise expired on May 4 and the National Telecommunications Commission issued a cease and desist order (CDO). 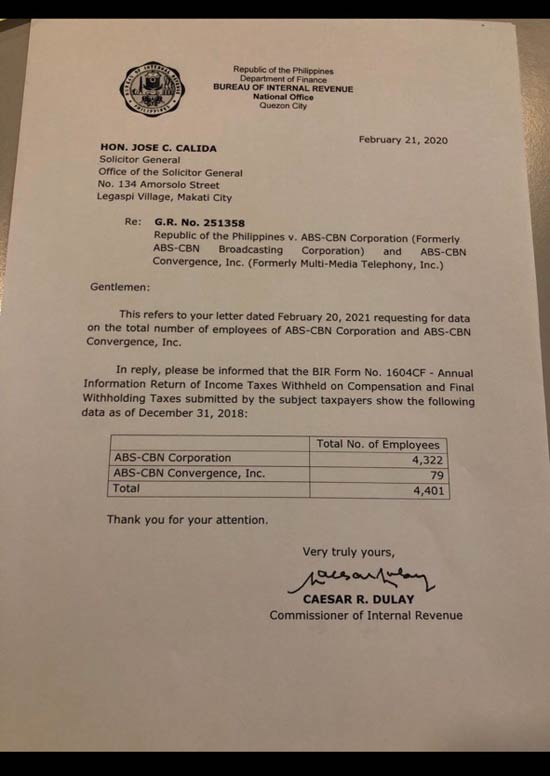 Calida said documents from the Bureau of Internal Revenue (BIR) would show that ABS-CBN had only 4,501 employees and not 11,000 as it had been claiming.

He added that the BIR based its figure on the number of employees of ABS-CBN Corp. and ABS-CBN Convergence who were paying taxes.

In the petition for certiorari and prohibition filed by ABS-CBN before the Supreme Court, the network noted that “the injury extends beyond ABS-CBN, as the CDO area greatly affects the public.”

Calida warned that if ABS-CBN could not prove its claim it could be cited for perjury.

He said the media entity did not even mention in its petition the actual number of employees, but just made a general claim.

Calida had made an inquiry with BIR about the number of employees of ABS-CBN to check against the network’s claim.

The bureau then sent him the Annual Information Return of Income Taxes Withheld on Compensation and Final Withholding Taxes.

In the document, the BIR noted that ABS-CBN Corp. had 4,322 employees, while ABS-CBN Convergence Inc. had 79.

The information clearly showed that less than half of the workers of ABS-CBN were regular employees and the 7,000 other employees were “talents” or “project-based” and contractual workers.

Sources close to ABS-CBN said the project-based workers or talents were mostly from the entertainment industry and their earnings were only deducted if they make a personal report to the BIR.

One source said many ABS-CBN workers who rendered eight hours of work or more daily were not considered regular workers but talents, which is in violation of the Labor Code.

But even as ABS-CBN waits for the Supreme Court to rule on its petition, it appears to be exploring other venues to bring its programs back on air.

In a virtual briefing over the weekend, tycoon Manuel V. Pangilinan said Cignal TV could decide this week whether to accept ABS-CBN’s proposal to secure a channel to air its programs.

Pangilinan, the chairman of Cignal, noted that discussions were still ongoing between the two groups.

“That’s currently under discussion. I don’t know where we are. That’s been offered not only to us but with other pay TV operators in the country. I think some of them have already accepted,” he told reporters.

“I think Cignal is still assessing it,,,We are open to it, but there are other factors to consider,” he said without elaborating.

He added that ABS-CBN and PLDT Inc.-backed network TV5 were not in talks for any possible deal.