Petitions against Anti-Terror Law climb to 19

A group of church leaders brought the number of petitions filed before the Supreme Court against Republic Act (RA) 11479 or the “Anti-Terrorism Law” to 19 on Friday. 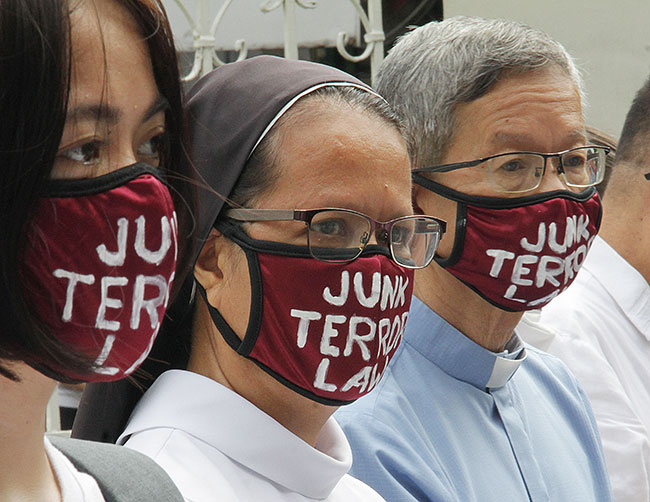 CHURCH MILITANT A church worker, a nun and a priest wear ‘Junk Terror Law’ masks as they stand outside the Supreme Court in Manila on July 24, 2020. They belong to groups made up of church workers and the National Council of Churches in the Philippines that filed the 17th petition against Republic Act 11479, or the “Anti-Terrorism Act of 2020.” PHOTO BY RENE H. DILAN

Many more petitions challenging the newly minted law are expected to be filed next week.

In its 97-page petition, the Public Interest Law Center (PILC), led by Manila Auxiliary Bishop Broderick Pabillo, called on the court to strike down the law in its entirety.

Petitions were also filed on Friday by the Alternative Law Groups (ALG), a coalition of 18 legal resource nongovernmental organizations, and by the General Assembly of Women for Reforms, Integrity, Equality Leadership and Action Inc. (Gabriela).

Pabillo, the apostolic administrator of the Archdiocese of Manila, was joined by Bishop Gerardo Almionaza of San Carlos City, Negros Occidental; Bishop Reuel Norman Marigza, minister of the United Church of Christ in the Philippines (UCCP); Rev. Rex Reyes Jr. of the Episcopal Church in the Philippines; Bishop Emergencio Padillo, member of UCCP’s Council of Bishops; and Dr. Aldrin Penamora of the Philippine Council of Evangelical Churches.

They highlighted the specter of prosecution for supporting, providing aid or inciting to terrorism and the possibility of being “designated” or connected to terrorist groups because of their work and mandate.

The petitioners also assailed the state’s expansive powers under the law such as surveillance and collection of data, detention for 14 days after warrantless arrest and designation of terrorists as incompatible and contrary to the Philippine Constitution.

“The Honorable Court must have heard of people active in social advocacies who are accused of being communists. Even bishops, priests, and the religious were included among those charged by the Philippine National Police with crimes of sedition and inciting sedition, solely because of their social advocacies,” the petitioners said.

They stressed that thousands of people have been killed in police operations on mere suspicion of involvement in criminality and illegal drugs.

In its petition, Gabriela claimed that the definition of terrorism in RA 11479 “gives its implementing body, the Anti-Terrorism Council, unbridled discretion and give it room to implement the law as an ‘arbitrary flexing of the government muscle’ against its perceived enemies.”

It also noted that the written authority from the ATC to arrest a person suspected of terrorism without a valid warrant of arrest issued by a judge after finding probable cause that a crime has been committed is “an intrusion into the exclusive judicial function and thus violates the principle of separation of powers.”

It argued that the anti-terror law “violates the constitutionally protected right to speech, expression and association, and other liberties.”

The ALG, in its 130-page petition, asked the Supreme Court to nullify the law because it poses dangers to civil society.

It said the law should be struck down as unconstitutional since it authorizes violations of the people’s fundamental liberties to due process, privacy, right against unreasonable search and seizures, free speech and expression, right to peaceably assemble, and right of association.

It mentioned that the law covers activities such as protests, community organizing, legal education, and assisting in controversial cases, acts that exercise the freedoms of assembly, speech, and expression, and essential in petitioning the government for redress of grievances.

The petition said RA 11479 might determine legitimate activities of the civil society and the sectors it works with as “‘terrorism’ in light of issues concerning its legality, overbreadth and vagueness.”

“With the broad and vague definitions of terrorism, and the intent to penalize threat to commit terrorism, proposal to commit terrorism, inciting to terrorism and recruitment to and membership in a terrorist organization, the law suffers infirmity. While it may appear that the provisions do not expressly prohibit speech or conduct, the mere fact that the definitions are not clearly crafted bolsters the fear that the State will have an unbridled discretion in interpreting the said law and may cover legitimate exercise of free speech, press, assembly and association.”