The Antique provincial government has passed Ordinance 2020-208 declaring August as the month of the Rufous-headed hornbill, locally known as dulungan. The species is one of the two most threatened hornbills in the Philippines, the other being the Sulu hornbill. Both can only be found in the Philippines. 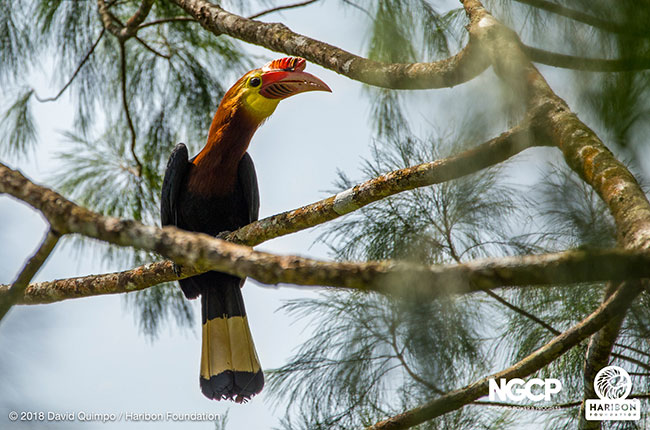 The announcement comes in the midst of the coronavirus disease 2019 (Covid-19) pandemic, the cause of which is rooted in the human encroachment on forest habitats.

Sangguniang Panlalawigan (SP) member Pio Jessielito Sumande of the Cavite provincial government sponsored the passage of the ordinance. Though the dulungan was also declared the “Provincial Bird of Antique” in the early 2000s, not much is known about the species. It is hoped the announcement will instill more pride among Antiquenos, as well as for Filipinos elsewhere, since the dulungan can be found nowhere else in the planet.

The dulungan hornbill or Rhabdotorrhinus waldeni can only be found in Panay and Negros islands. They feed on fruit trees in the forests, and create nests out of natural holes and crevices in the trees. Regarded as “farmers of the forest,” the dulungan helps in seed dispersal of trees, helping forests grow and expand.

The Central Panay Mountains in Panay Island is home to watersheds that provide clean water to several communities from the four provinces of Antique, Aklan, Capiz and Iloilo.

This also inspired the local governments of Sebaste and Valderrama in Antique to declare 3,348 and 9,665 hectares of their forests, respectively, as critical habitat (CH) for the dulungan and other threatened species.

CH are established by local governments and communities to protect threatened species that are outside of protected areas as defined in the National Integrated Protected Areas System Act. The CH was declared due to the presence of five important species unique to Western Visayas, including the dulungan.

Despite the advances in conserving the dulungan and forest resources, only 8 percent of Panay’s forest remain. Altogether, only 24 percent of forests remain in the entire archipelago, according to the Forest Management Bureau of the Department of Environment and Natural Resources.

The Haribon Foundation, with support from the National Grid Corp. of the Philippines (NGCP), have been working together under Haribon’s Species of Hope: Dulungan project.

Through the partnership, surveys were conducted in Antique province and Wildlife Enforcement Officers were trained to assist in law enforcement. Awareness-raising campaigns were conducted wherein both students and teachers planned and carried out conservation projects.

“This is an example of how important local efforts are in conserving species unique to the country, and even specific islands and provinces,” Haribon Foundation said,

“As communities in Panay begin to celebrate their unique natural heritage year after year, it is hoped that this inspires other communities to declare similar measures. This is a good start in protecting our remaining forests and preventing, or preparing for, future outbreaks. Kruhay!” it added.