Tampered coronavirus disease 2019 (Covid-19) test results among seafarers who were to join their vessels in Singapore were recently discovered by that country’s maritime administration, causing international shipping bodies to raise the alarm on all member-states. 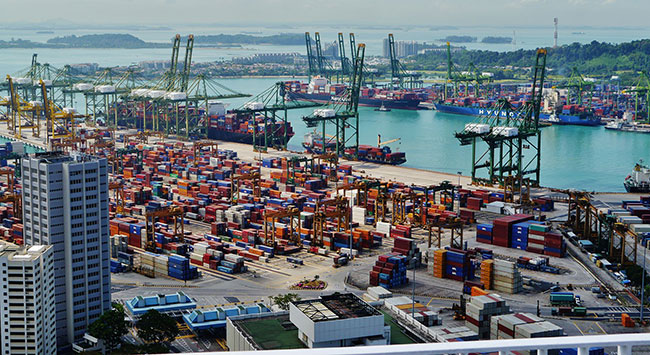 This Nov. 3, 2015 photo shows the Port of Singapore. PHOTO BY ZAIRON VIA WIKIMEDIA COMMONS

The International Chamber of Shipping (ICS) said the incident has placed the industry in a “severe setback” with a potential shutdown of crew change processes at important shipping hubs.

“This will impact the vast majority of seafarers and ship owners who are acting in accordance with the protocols,” it said in a statement.

The Maritime Port Authority (MPA) in Singapore reported an incident where a crew member who joined a vessel from one of the country’s port tested positive for Covid-19.

“These results conducted at the joining crew’s home country are being scrutinized, and the MPA has noticed that some have been either altered or tampered with,” the agency said.

Meanwhile, the Singapore Shipping Association (SSA) said that in the past week, there have been “fresh cases of crew arriving in Singapore with Covid-19 symptoms” and eventually testing positive for the virus.

The string of tampered Covid-19 test results resulted in the suspension and banning of unspecified number of manning agencies from carrying out further crew change applications.

And while MPA and SSA did not mention the home country of seafarers who tested positive from the disease, one of the representatives of a Philippine manning agency who did not want to be identified said their application for crew change in Singapore was recently rejected.

“Our applications for crew change in Singapore were rejected. Our agents who personally went to MPA to appeal the request were also turned down. As per our agent’s report, MPA did not approve any new application for the past week and there is a good possibility that all ongoing applications will also be rejected,” a representative from the local manning agency said.

“The recent increase of Covid-19 positive seafarers who are arriving in Singapore has led MPA to take drastic measures such as fining and banning a number of ship managers and port agents from doing crew change,” he added.

The ICS called out on the “irresponsible actions” of the small minority that could impact a vast majority of those who comply with the crew change protocols.

“The industry cannot afford to lose the faith and support of governments. [But] with stories emerging of crew arriving in Singapore with Covid-19 symptoms, it is clear that some seafarers and manning companies are not taking seriously the protocol of self-imposed isolation [minimum of 14 days] when being rostered for crew change,” it said in a statement.

“The irresponsible actions of a small minority could potentially lead to the shut down of crew change,” ICS added.

The agency has been urging the global shipping industry and national governments over the past months to adopt its health guidance and the 12-step crew change protocols to ensure crew changes can be carried out.

The Philippines, for its part, released revised guidelines to ensure that crew change processes are done in accordance with health protocols. The document, released just nine days ago by the Maritime Industry Authority (Marina), follows the recommended procedures of the International Maritime Organization issued last May.

Marina Administrator Robert Empedrad clarified, however, that it does not mean shipping companies will be allowed to implement crew change in any port. He emphasized the Department of Transportation (DOTr) evaluates and approves the capability of a port to comply with all protocols including undertaking reverse transcription-polymerase chain reaction or RT-PCR swab testing.

The ports of Manila and Orion, Bataan are currently the only crew change hubs allowed by DOTr.