LOS ANGELES: After LeBron James emerged from the longest season in NBA history with a fourth championship ring, he returned home and planned the first Christmas family vacation of his adult life.

That's when James learned that his 17th NBA offseason would be unprecedentedly short.

When James was told the NBA intended to resume games on Dec. 22, just 72 days after the Lakers beat Miami to win the title, the superstar admits he reacted with a mild expletive. 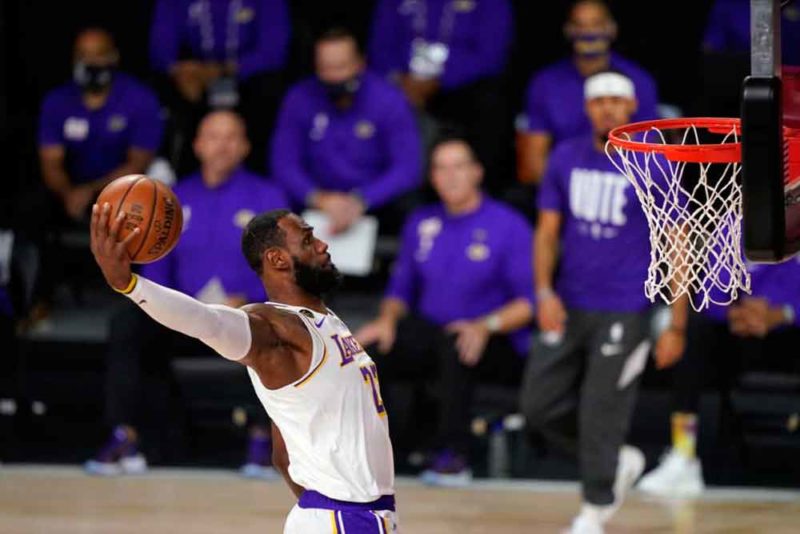 In this Oct. 11, 2020 (October 12 in Manila) file photo, Los Angeles Lakers' LeBron James dunks during the first half in Game 6 of basketball's NBA Finals against the Miami Heat in Lake Buena Vista, Florida. AP PHOTO

“Just being completely honest, I wasn't expecting that,” James said Monday in his first public comments since the NBA champions opened training camp.

“Early conversations were going on, and I was hearing there would be kind of a mid-January start," James said. "Training camp would start after Christmas, and we would have the opportunity to spend Christmas with our families. ... I had to switch up a lot of things. I just started preparing my mind and preparing my body.”

James still reported to camp ready last week for his 18th NBA season and the pursuit of yet another banner with the Lakers, who added an impressive amount of veteran talent in the abbreviated offseason for their repeat quest.

James also showed up with a new two-year, $85 million contract extension through the 2022-23 season, setting his future in Los Angeles through his 20th NBA campaign.

James chose that year deliberately: His oldest son, LeBron James Jr., will graduate from high school in 2023. Bronny is a sophomore at private Sierra Canyon School, where he played a reserve role on the basketball team last season, and LeBron has previously spoken of his fond dream to play in the NBA with — or against — his son.

“The best thing about it is the year I’ll be a free agent will be the same year my oldest son graduates high school,” James said of his new deal. “I’ll have some options to see, for me personally, what I want to do (going) forward — being around my family, being around my son more, or continue to play this game I love with great health and great spirits. We’ll see.”

Whether that happens, and whether it will be in Los Angeles, won’t be certain for three long years. James intends to make the most of the meantime.

James will shoulder the physical challenges of this difficult year, but it isn't easy: He said he was “sore as hell” Monday, although that's normal every year after the first two preseason practices.

The uniqueness of 2020 has forced James and the Lakers to consider whether they should practice load management this season.

LeBron has largely declined to follow other stars' strategy of strategic absences from games in recent years: He played in all 82 games for Cleveland in 2017-18, and after an injury-plagued 2018-19 in LA, he only missed four games last season.

Still, James has played 1,265 career regular-season games — already the 33rd-most in league history — and an NBA-record 260 playoff contests as he heads toward his 36th birthday later this month.

James and the Lakers haven't decided on their plans for the regular season, with James saying there's “a fine line” between strategic rest and unnecessary inactivity. He does sound amenable to limited action in the preseason, which begins Friday.

Coach Frank Vogel says it's too early to make a decision about how much James will play in the preseason or in the regular season.

“We don’t want to underdo it and then he’s not ready to play in real games, but we obviously don’t want to overdo it,” Vogel said of the preseason. “So really don’t know where that’s going to land. I expect we’ll probably see him some, but not a ton.”

No matter what James decides to do this season and into the future, the Lakers clearly have no worries about his long-term viability as a difference-making star. General manager Rob Pelinka signed James last week to a maximum contract extension that will keep him together with Anthony Davis for at least the next three seasons — an enviable situation for any team.

Pelinka says James' success is rooted in the versatility of his game, along with his intellectual ability to excel with more than pure athleticism.

“Because of those gifts, he’s going to continue to be a dominant player well beyond what the regular, ordinary NBA player would be able to do,” Pelinka said. “It wasn’t even a debate for us. We think he’s going to be very effective and provide extraordinary value for every year he decides to play as a Laker.

“What was especially satisfying and exciting about (the latest championship) is that now you can see, with the legacy he’s establishing as a Laker, that his greatness will be defined here. I’m sure he’ll hang many jerseys someday, but we hope one of those will be a Lakers jersey.”