The United States logged its highest ever daily death toll from the coronavirus Wednesday (Thursday in Manila) as the world prepares to turn the page on a grim year defined by the pandemic, with much of the globe united in one hope for 2021: that a slew of new vaccines will stamp out Covid-19. 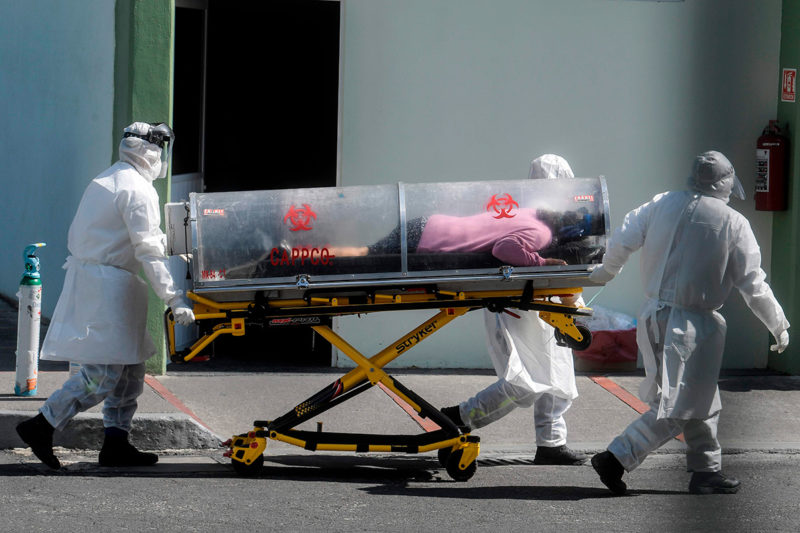 Paramedics move a patient suspected of being infected with the novel coronavirus into the 22 Battalion of the Military Police Hospital, in Mexico City, on December 30, 2020. - Mexico has registered more than 124,000 coronavirus deaths -- the world's fourth-highest toll after the United States, Brazil and India. (Photo by PEDRO PARDO / AFP)

New Year’s Eve marked one year since the World Health Organization first mentioned a mysterious pneumonia in China later identified as Covid-19, which went on in 2020 to kill more than 1.79 million people and devastate the global economy in unprecedented ways.

In the world’s worst-hit country, the US, the numbers keep climbing: On Wednesday more than 3,900 people died of Covid-19, a new record, bringing the toll since the pandemic began to more than 19.7 million infections and 341,000 lives lost.

Experts believe the worst is yet to come, as US healthcare workers brace for a surge in cases after major holiday gatherings.

But international efforts helped develop vaccines in record time. On Wednesday, Britain approved a lower-cost vaccine developed by the University of Oxford and drug firm AstraZeneca, making it the third jab to win approval in the Western world, after the Pfizer-BioNTech and Moderna vaccines.

Britain, hard hit by a worrisome new strain of the virus and now divorced from the European Union due to Brexit, will “move to vaccinate as many people as quickly as possible,” tweeted British Prime Minister Boris Johnson.

Unlike the Pfizer-BioNTech and Moderna vaccines, the one from AstraZeneca and Oxford does not need to be stored at very low temperatures.

It can be kept, transported and handled in normal refrigerated conditions, making it easier and cheaper to administer, which is particularly important for less wealthy nations.

Hours later, Argentina became the second nation to approve the vaccine and was soon followed by El Salvador. Argentina and Mexico have agreements to distribute the vaccine in Latin America.

But the US and European Union indicated that they would not soon follow suit.

He did not fault Britain’s health agency but said the US was following its own trials and evaluations.

He also voiced hope that Johnson & Johnson’s Janssen vaccine — which, in contrast to initially approved jabs, requires just one dose — could be ready for approval in the US in the first half of February.

Russia and China also claim to have developed Covid-19 vaccines and have already started administering them.

Chinese pharma giant Sinopharm on Wednesday said Phase 3 trials of its candidate had shown 79-percent effectiveness, short of the more than 90 percent achieved by Pfizer-BioNTech and Moderna. The firm has applied to China’s drug regulator for approval.

But Beijing has struggled to gain international trust for its vaccines, hindered by a lack of data transparency as well as criticism over its handling of the initial outbreak of the virus in the central Chinese city of Wuhan.

Even as vaccinations ramp up in Europe and North America, global infections have surged to more than 82 million.

Germany, which had handled the first coronavirus wave relatively well, has been hit hard by the second.

It logged more than 1,000 daily deaths for the first time, authorities said on Wednesday, as Chancellor Angela Merkel warned that the country’s “difficult times” were going to last “for a good while yet.”