It takes a village to create a film — a team of hardworking and dedicated workers who pour out their heart and soul along with blood, sweat, and tears. Sleepless nights, body aches, tight deadlines, and high stress levels are dealt with during pre-production, production, and post-production as well as in distribution and exhibition.

Filmmaking is an arduous labor of love. As an artist, I can attest that our film industry members and workers are fueled by their passion for the arts, culture, and film. I have witnessed the laudable dedication of our filmmakers, talents, and workers who go above and beyond their tasks just to make things happen on the set or in the workplace. 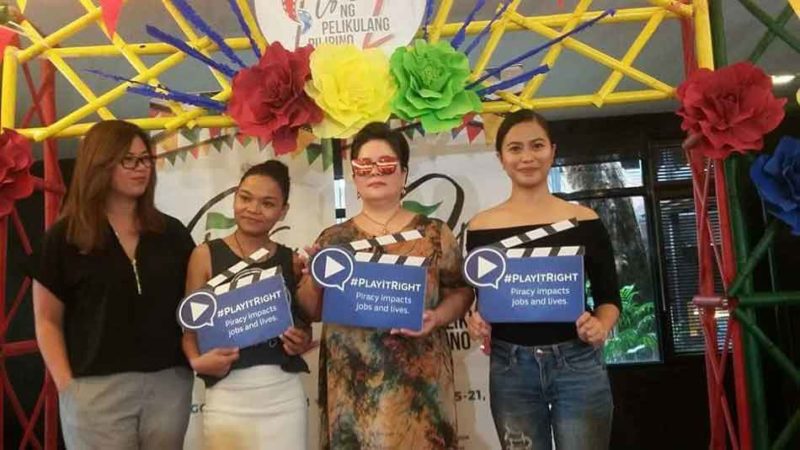 ‘Notes from the Chair’ with actresses Chai Fonacier, Jaclyn Jose, and Anna Luna in PPP 2018.

The film industry contributes at least P11 billion to the economy, and studies show that revenues can increase by at least 15 percent if only piracy is curbed. A 2014 study commissioned by the World Intellectual Property Organization noted that copyright-based industries, including film, contributed 7.34 percent to the gross domestic product (GDP) and 14.14 percent of the country’s total employment based on 2010 data.

According to an analysis of Alexa data, there was a rise in Philippine page views for illegal online streaming by 75 percent from 2016 to 2017. Also in 2016, Filipinos visited piracy websites more than 22 million times. Such figure is higher than the Filipinos’ 18 million visits to the Top 3 legal websites for films and television programs.

The increase in pirated content consumption worsened the Filipino film industry situation as attendance in movie theaters continued to drop drastically. In 2017, cinema admissions were at 51.5 million. And for a population of over 105 million, that is a very low number.

The demand for physical copies of films also dwindled as online streaming gained ground. This led to the spread of illegal streaming devices (ISDs) and apps as well as the usage of social media to stream films illegally, causing piracy to become more pervasive.

The “plug and play infringement” is made possible by ISDs that grant access to free or paid online streams such as video-on-demand and live broadcasts. Using ISDs poses a security threat as audiences are exposed to malware and viruses that can obtain personal information.

Piracy amid the pandemic

To make things worse, cinemas experienced shutdowns for months (and counting) due to the Covid-19 pandemic. It was already bad enough in recent years when movie theater attendances were low, but during the lockdown, the numbers plopped to zero.

With the public’s need for entertainment through films and other audiovisual content, producers, distributors and exhibitors turned to online streaming. This was a welcome move. However, it also led to the proliferation of piracy in the digital realm.

The Intellectual Property Office of the Philippines (IPOPHL) received 67 complaints and reports on intellectual property rights violations from March to June 2020. Piracy, including the illegal reproduction of copyrighted content and illegal streaming, was reported in 28 complaints. The IPOPHL’s Intellectual Property Rights Enforcement Office (IEO) noted that aside from films, TV programs, particularly anime series, and e-books have been pirated as well.

Indeed, the Covid-19 crisis was like a double-edged sword that affected content creation and exhibition, and led to the rise of online piracy. So aside from finding ways to resume productions and create alternative screening platforms, film industry leaders also have to deal with intensified piracy.

For the 4th Pista ng Pelikulang Pilipino (PPP) held from October to December, the FDCP created an anti-piracy task force because we committed to participating producers that we will be on the lookout for any possible piracy. We made sure that the FDCP Channel streaming platform had anti-piracy measures in place and that the developers did monitoring 24/7. We also sought assistance from IPOPHL and the Optical Media Board (OMB).

As for the recently concluded 46th Metro Manila Film Festival (MMFF), the OMB received at least 49 reports of piracy. MMFF 2020 Best Picture “Fan Girl” executive producer Quark Henares revealed that his team closely monitored illegal online streaming and found 10 to 20 pirated links every hour. The OMB has since filed complaints against 15 social media users before the Department of Justice (DOJ) for streaming MMFF films on their social media accounts.

Piracy poses the greatest threat to Philippine Cinema. And with the FDCP’s numerous partnerships and projects with IPOPHL, OMB, and fellow government agencies as well as the private sector, I learned that collaboration is key in combating such a pressing problem.

Globe has been steadfast in its anti-piracy advocacy called #PlayItRight that educates Filipinos on the perils of piracy and the importance of consuming content from legitimate sources. The #PlayItRight advocacy campaign has partnered with PPP and MMFF.

An Anti-Piracy Task Force with IPOPHL and other government agencies is in the works to address online piracy. Apart from the Intellectual Property Code, we also have the Optical Media Act of 2003, Anti-Camcording Law, and Cybercrime Law to counter piracy. Expect more information drives, lectures, and workshops as well as stricter monitoring, reporting and law enforcement.

In this time where our films have widened their reach through online platforms, it is crucial to be aware of how these labors of love can be protected. While there is clamor for more quality content from audiences, there is also a cry for help from the film industry: a plea to consumers to respect and support the hard work of film workers and help in sustaining their livelihood already badly affected by the Covid-19 crisis.

With film piracy, it’s important to remember that it’s as much as your fight as it is ours and with real world consequences to our filmmakers and workers. We have to collaborate and work together to combat piracy so that it ceases to be a perennial problem of the industry. Hopefully, it will be a problem of the past through everyone’s consideration and cooperation.