Cause-oriented groups on Monday slammed a memorandum circular of the Land Transportation Office (LTO), which requires vehicle owners to pay P1,800 to have their cars inspected for roadworthiness as part of the registration process. 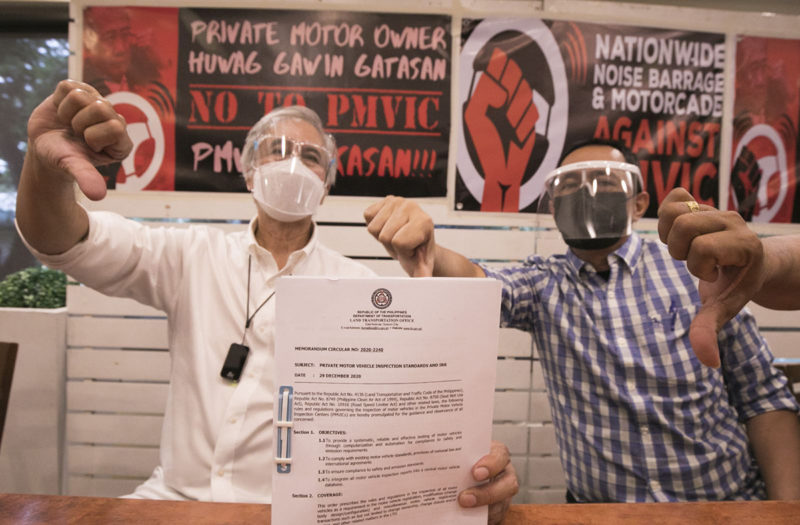 The Volunteers Against Crime and Corruption (VACC) and the Clean Air Movement Philippines Inc. (Campi) are preparing a position paper calling on Malacañang and the Department of Transportation to stop the LTO from implementing the scheme “that never had any single public consultation.”

“We are likewise set to question it before a proper court as we seek for a temporary restraining order to stop its implementation which caught us all by surprise as the LTO implemented it last December 29 right amid the Covid-19 pandemic,” Campi President Larry Pitpit said.

VACC President Arsenio Evangelista said  they were not against the government’s roadworthiness campaign but they are questioning the lack of transparency.

“If there is no public consultation, there is corruption,” he added.

The new motor vehicle inspection program includes a 70-point automated roadworthiness based on international standards. Vehicles must pass the test as a prerequisite for LTO registration.

Under Section 17 of LTO’s memorandum circular, the owner of a vehicle with a gross vehicle weight of 4,500 kilograms or lower will pay an inspection fee of P1,800.

Motorcycle and tricycle owners will have to shell out P600 as inspection fee. Meanwhile, a fee of P900 will be charged for re-inspection.

They also questioned LTO’s real motive when it implemented the scheme in Pampanga, Nueva Ecija and other provinces.

Saying the new system was enforced without amending Republic Act 8749, or the “Philippine Clean Air Act,” VACC and Campi claimed that several PMVIC inspection sites have been awarded to private operators, mostly politicians and former and current ranking government officials.

Moreover, the groups said the 138 inspection sites across the country may not be able to accommodate 12 million private cars and 15 to 16 million motorcycles and tricycles.