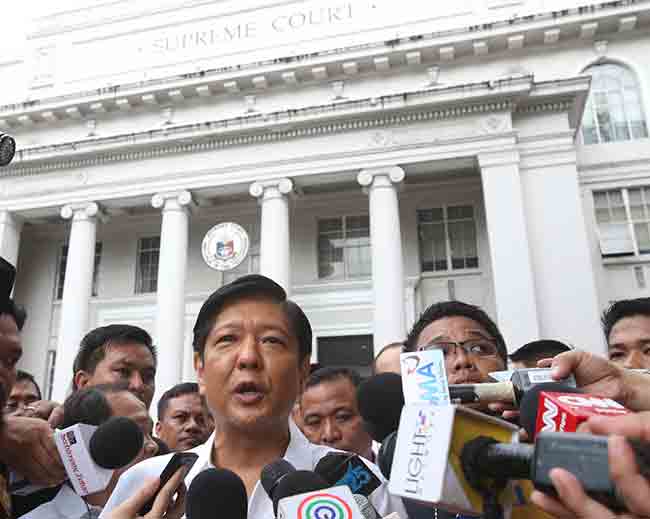 The Manila Times has learned from a court insider that the deliberations of the court, sitting Presidential Electoral Tribunal (PET), were reset for Tuesday to give newly appointed Justice Jhoseph Lopez more time to study the draft resolution of Associate Justice Marvic Mario Victor Leonen.

The case had dragged for more than a year before Leonen issued the draft resolution.

The source said Lopez will be given a week to pore over the Leonen resolution.

Leonen submitted the draft to Chief Justice Diosdado Peralta and the other magistrates last January 12 before Lopez was appointed to the court.

Leonen personally handed the draft to the justices during an en banc session as a precaution against leakages.

It had Leonen’s unique watermark — Baybayin characters for the word “confidential” — on every page of the document.

Leonen has also asked each Supreme Court magistrate to sign for the copy of the draft, another safeguard against leakage, the court insider said.

The justice has been extra careful in protecting the confidentiality of the documents he issues after The Times obtained a copy of his reflections on the Marcos case in which he advocated its dismissal.

In the reflections’ footnote, Leonen had warned the court’s staff: “This is part of the internal deliberations of the Court. Unauthorized disclosure, publication, or use of this document or any of its contents is classified as a grave offense and is punishable by suspension or dismissal from service.”

The reflections were among the documents submitted as evidence in the impeachment case filed against Leonen before the House of Representatives.

The protest has been pending before the PET for about four years, having been filed by Marcos on June 29, 2016.

It languished for three years with Justice Alfredo Benjamin Caguioa and more than a year with Leonen.

In the protest, Marcos questions the election results from 39,221 clustered precincts and accuses his rival Maria Leonor “Leni” Robredo of “massive electoral fraud, anomalies and irregularities.”