This plucky entrepreneur traveled to different destinations as a flight attendant, which allowed her to observe the latest fashion trends. She parlayed that experience into a lucrative career as a personal shopper. 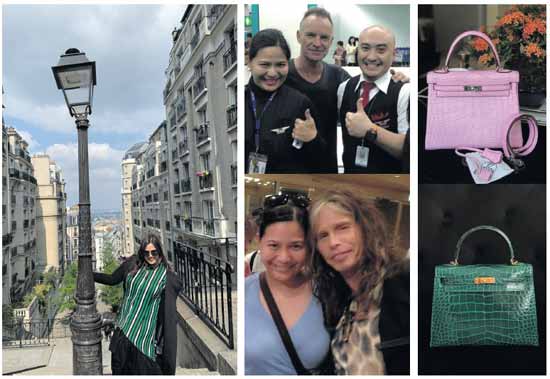 “That made me a one-woman show,” Xtine says. “So, I got to know the clients and befriended them. They would ask me for all sorts of fashion advice, like whether something fitted them or not.” Through the years, she got to learn their various preferences and personalities, which helped her choose the items she would recommend.

“One example is my client, Jojo Acero, whom I’ve grown very close to,” Xtine says. “I know she has a bad shoulder, so she doesn’t like shoulder bags. She is bubbly, so bags with pops of colors match her personality. She relies on me when it comes to the color matching of twilly ribbons (accessories for bag handles) for her bags.”

Xtine is at her most fulfilled when clients are happy with their purchases. “They say I’m their angel, and that’s how my [brand] name, ‘Bag Angel,’ came to be. I’m thankful to those who trusted me,” she adds. Her clientele consists mainly of women who either have no time or patience to shop or want to have first look at what is trending in the market. The men who approach her for help are mostly husbands wanting to surprise their wives. “I give them my full support,” Xtine declares.

Xtine deals in a variety of luxury goods, including clothes, purses, shoes, jewelery, accessories, mobile phones and tableware, among others. “I happened to make Fiorucci popular again in Manila,” she reports. “I bought the collection that saw it collaborating with Adidas and brought it to Manila. I sent [actress] Heart Evangelista a yellow Fiorucci sweater, and that was the start [of market interest]. I smile when I see people wear Fiorucci. Even the flagship store in London calls me their favorite customer.”

Xtine may be constantly challenged by her job, but she enjoys the experience immensely. For example, she was able to score the Birkin 30 crocodile in rose Scheherazade — now estimated at P8 million — from the Hermes store in Osaka, Japan.

Then, there was this special cellphone that could only be bought in Russia, which she acquired during the height of the pandemic last year. She recalls: “That phone had a keypad made of 18-karat gold and could be personalized. It was limited in number. To get it, I also had to overcome the language barrier. But through perseverance, I was able to have the phone shipped to Manila. It may have arrived a month after the VIP’s birthday, but nonetheless I delivered.”

For another well-heeled client, Xtine ordered the Rolex Saru GMT, which was sold out all over the world and only available through resellers. Unfazed, Xtine did not give up. She says: “Through prayers, I was led to some people, who helped me manage to get one from Rolex Switzerland. This happened only in December 2020.”

What have been the sweetest compliments that she has received from clients? “Several times I have been told: ‘You are truly an angel!’ Another said that I hold a PhD for Hermes,” she says.

Those who wish to order from Xtine for the first time are required to place a security deposit or down payment to avoid cancellations, she explains. During the rare occasions that a customer goes away disgruntled with her service, she admits: “As much as I have done my best to deliver, there are uncontrollable issues that would humble me.”

Happily that is more the exception than the rule for this plucky entrepreneur, who says: “Shopping is my sport. I breathe shopping. If my clients are not asking for a particular item, I introduce them to certain brands, a new collection or releases. Many dream of owning an Hermès Himalaya Birkin, Himalaya Kelly, Kelly crocodile in bubblegum pink color or Louis Vuitton customized trunk jewelry case, with the lowest price of these items put at P3.4 million, while the highest price is P7.7 million.”

Besides their friendship, Xtine’s clients have offered her several perks, such as the family yacht to celebrate her birthday, resort accommodation and donations to her special charity. “Material things truly make me giddy, but what is most important for me is that my clients have thought of me, and that alone shows how much I matter to them,” she says.

Xtine is the product of a small family. Her father, Alfredo, who was her biggest fan, passed away in 2017, and her mother, Sofia, was the first to teach her the business of selling. Her older brother, Archie, runs his own photography service.

At first, she wanted to become a psychologist, but instead graduated with degrees in management from Siena College and nursing from Dr. Yanga’s Colleges in Bocaue municipality, Bulacan province. The first, she says, provided knowledge that has helped in “what I do now,” while the second “albeit I was not able to practice the [nursing] profession has paved the way for the most important virtue in my current job — patience.”

Xtine, whose marriage was annulled in 2005, is mother to 24-year-old Dominique, a civilian human resource of the Philippine Army. The pair may not have spent too much time together during Xtine’s hectic flying years, but that does not seem to have affected their bond. “I would always bring her on one of my trips and enjoy quality time with her on my layovers,” her mother says.

Shopping all over the world is not something Xtine simply does on a whim. For her, shopping is serious business because keeping clients happy is, after all, serious business.

To continue doing charity work as my pay-it-forward mission

I was a part-time crew at Wendy’s Philippines when I was 16.

Prayer, exercise and coffee, while checking emails and checking out the latest fashion updates

The gift of gab