The Department of Health (DoH) is convinced that potent variants of the coronavirus disease 2019 (Covid-19) is behind the explosive rise in infections in the National Capital Region. 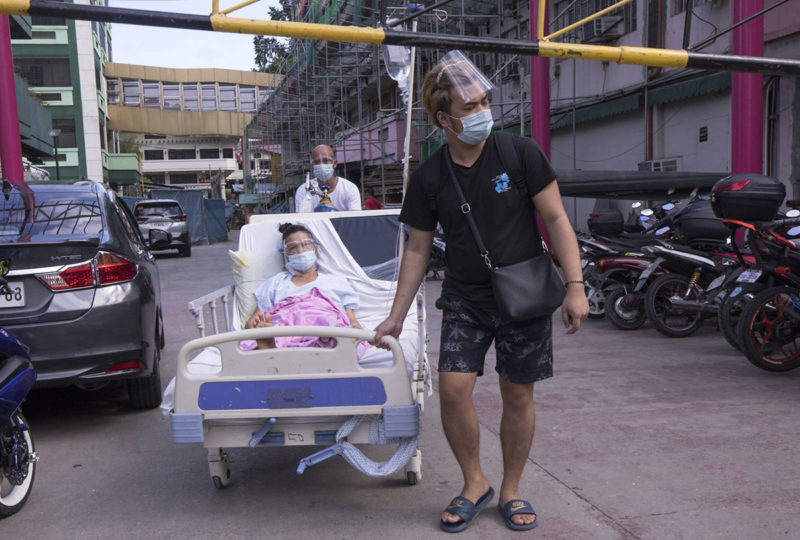 OVERFLOWING A patient is wheeled to a makeshift isolation ward outside the Amang Rodriguez Hospital in Marikina City on March 22, 2021. Hospitals in Metro Manila struggled to attend to a surge in coronavirus cases. PHOTO BY RUY L. MARTINEZ

The department, however, stopped short of declaring a community transmission of the variants and is waiting for confirmation by the World Health Organization (WHO).

The DoH based its observation on the more than 100 samples that went through genome sequencing last week.

On Monday, the number of single-day Covid cases in the country soared to a record 8,019, the fourth straight day the figure has breached the 7,000 level.

Health Undersecretary Maria Rosario Vergeire said the department needed the green light from the WHO before it could announce a community spread in Metro Manila.

“Sila ang makakapagbigay ng guidance at confirmation (They will give us guidance and confirmation) if there are really local or community transmission of the variants,” she said during a media briefing on Monday.

On Saturday, the DoH reported 46 additional B117, 62 B1351 and six P3 variant cases in the last batch of more than 150 samples sequenced by the Philippine Genome Center.

The B117 variant was first discovered in the United Kingdom, while the B1351 was detected in Brazil. The P3, which is not yet considered as a variant of concern, was first detected in samples from Central Visayas.

Of the 375 UK and South African variant cases, 181 were reported in Metro Manila, while Central Visayas had the most number of P3 cases with 68.

“Hindi po natin ipag-kakaila na talagang nakita na natin ang mga variants ay nasa cities sa Metro Manila at ‘yan ay factual na, and in all of the cities may UK variant na or the South African variant na (We cannot discount the fact that these variants are in different cities in Metro Manila, and it is also a fact that in all cities there could be the UK or the South African variant),” Vergeire said.

Infectious diseases expert Dr. Edsel Maurice Salvana said it was “most likely” that there is a sustained community spread of the variants, but noted there were some clusters of variant cases that remained traceable.

According to the WHO, community transmission is established if the cases have no links to a cluster of cases.

“A lot of the clusters can still be traced, lalo na doon sa (especially in the) South African variant, but this is as we are sequencing, the best thing to do right now. The evidence is point[ing] towards community transmission,” Salvana said during the daily briefing of Palace spokesman Harry Roque Jr.

He advised people to assume that there was already a variant-driven community transmission, saying it was better to “overcompensate” than “undercompensate.”

Vergeire said while the DoH had seen that the variants were behind the surge in Covid-19 cases in the past few weeks, the root cause remained the same, which is low compliance to minimum health standards.

For Roque, reduced surveillance and contact tracing and delayed testing triggered the increase in Covid-19 cases.

“Meron po tayong (We have)reduced surveillance, reduced contact tracing and delayed testing. So, ‘yan po ang babawiin nating muli dito sa susunod na dalawang linggo (that is what we are going to work on in the next two weeks),” he said.

Asked who was to blame for the reduced contact tracing and testing efforts, Roque said: “‘Wag na po tayo magsisihan (Let us not blame anyone).”

Aside from the factors he mentioned, Roque also pointed to the new Covid-19 variants, low masking compliance, superspreader events, gatherings and poor ventilation as the drivers of the Covid-19 surge.

He said “vaccine confidence” was another reason.

The government on Sunday ordered a tighter general community quarantine in Metro Manila, Bulacan, Cavite, Laguna and Rizal until April 4.

Vergeire said that while the DoH’s response to the pandemic is not perfect, it has accomplished so much.

She added that countries across the globe were fighting a resurgence of the virus which has infected more than 671,000 Filipinos, of which nearly 13,000 have died.

Some senators were puzzled by the resurgence of Covid-19 infections, particularly in Metro Manila.

The senators’ call came after hospitals in Metro Manila were almost at full capacity because of the upswing in Covid-19 cases.

“At this stage with close to 8,000 cases a day and with our hospital Covid-19 wings filling up again, we have little choice. Our health system is again overwhelmed, unfortunately,” Senate Finance committee Chairman Angara said in Filipino and English in a viber message to reporters.Gatchalian, chairman of the Senate Basic Education committee, recommended drastic measures, including strict localized lockdowns, a ban on gatherings and no home quarantines.

Villanueva, chairman of the Senate Labor committee, asked transport officials to assure the country’s labor force there are enough public transport they could use in going to and coming home from work.

He continued to plead with employers to implement, if possible, a work from home arrangement.