THE European Union (EU) on Thursday joined other nations in expressing concern over the reported incursion of Chinese maritime militia personnel in the West Philippine Sea (WPS).

The National Task Force on WPS on Sunday reported that Chinese fishing vessels were sighted moored in line formation at the Julian Felipe Reef on March 7.

The Chinese embassy in Manila has denied the alleged presence of Chinese maritime militia in the WPS. It insisted that the area it called Niu’e Jiao is part of its territory. 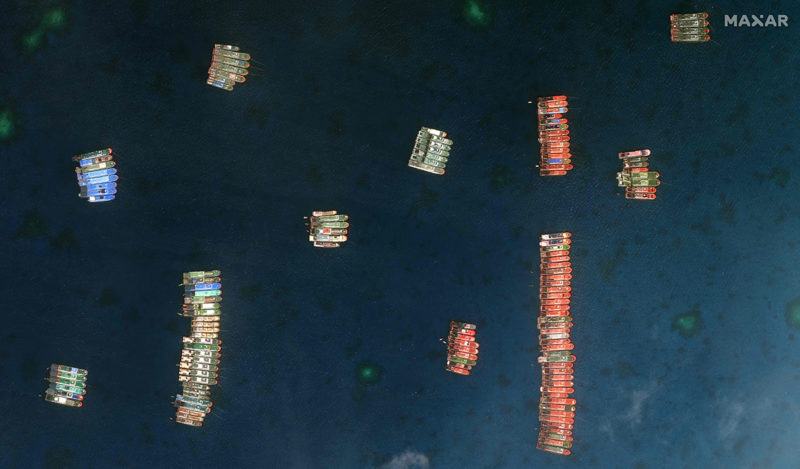 At sea, Philippines : This handout satellite imagery taken on March 23, 2021 and received on March 25 from Maxar Technologies shows Chinese vessels anchored at the Whitsun Reef, around 320 kilometres (175 nautical miles) west of Bataraza in Palawan in the South China Sea. Chinese vessels gathered near a disputed reef in the South China Sea are "fishing boats" sheltering from poor weather, the foreign ministry said March 22, a day after the Philippines described their presence as an incursion. AFP / Satellite image ©2021 Maxar Technologies

Foreign Affairs Secretary Teodoro Locsin on Sunday filed a diplomatic protest against the alleged presence of the Chinese fishing boats in the WPS and demanded China to withdraw its vessels.

EU Ambassador to the Philippines Luc Véron on Thursday tweeted, "At the EU-Asean ministerial, [EU High Representative] Josep Borrell said, 'We cannot allow countries to unilaterally undermine international law and maritime security in the #SouthChina#Sea, thereby representing a serious threat to the peaceful development of the region. EU stands by rules-based order".

In a joint statement with United States Secretary of State Antony Blinken on March 24, Borell said the US and EU opened a new chapter in their relations, "marked by stronger cooperation on key foreign policy and security issues."

"We agreed to launch the European Union-United States dialog on China as a forum to discuss the full range of related challenges and opportunities," said Borell, the EU Minister for Foreign Affairs.

"We decided to continue meetings at the senior official and expert levels on topics such as reciprocity; economic issues; resilience; human rights; security; multilateralism; and areas for constructive engagement with China, such as climate change," he said.

Borell added, "We share an assessment of China's role as a partner, as a competitor and a systemic rival - as we are used to say here in Europe."

The US State Department and the Japanese Embassy in the Philippines had engaged the Chinese Embassy in a "Twitter war" over the situation in the WPS.

US State Department tweeted, "The US stands with our ally, the Philippines, regarding concerns about the gathering of PRC maritime militia vessels near Whitsun Reef (Julian Felipe Reef). We call on Beijing to stop using its maritime militia to intimidate and provoke others, which undermines peace and security."

The Japanese Embassy said, "The South China Sea issues are directly related to peace and stability and a concern for all. Japan strongly opposes any action that heightens tensions. We support the enforcement of #RuleOfLaw in the sea and work with the international community to protect the free, open and peaceful seas."

However, the Chinese Embassy Manila, replied, "China is committed to managing differences through bilateral consultations and safeguarding peace and stability in the region. It is a pity that some Asian country, which has disputes with China in the East China Sea and is driven by the selfish aim to check China's revitalization, willingly stoops to acting as a strategic vassal of the US. Such despicable behavior is inviting the wolf into the house, betraying the collective interests of the whole region and doomed to fail."