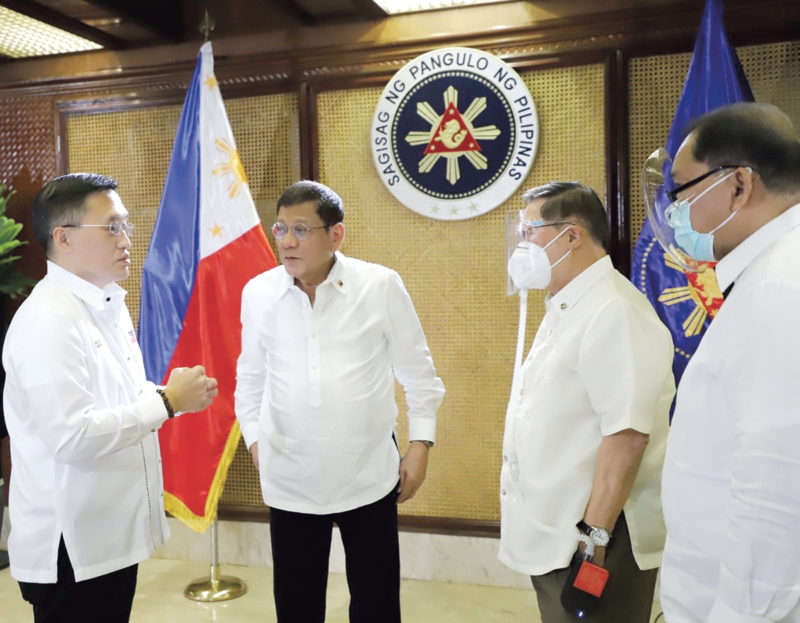 CAPTIVE AUDIENCE In this file photo, Sen. Christopher Lawrence ‘Bong’ Go has President Rodrigo Duterte and two other officials’ attention during a meeting in Malacañang. The President signed the Corporate Recovery and Tax Incentives for Enterprises (Create) into law on March 26, 2021, which aims to reduce corporate income tax in a bid to help the economy recover amid the impact of the Covid-19 pandemic. The President, however, also vetoed some provisions under Republic Act 11534 or the Create Act. MALACAÑANG PHOTO

But Duterte vetoed some provisions of the new law, including the increase of the value-added tax-exempt threshold on sales of real property; 90-day period for processing of general tax refunds; definition of investment capital; and redundant incentives for domestic enterprises.

“I suggest that the legislature, the Department of Finance and the BIR (Bureau of Internal Revenue) come up with mechanisms to streamline the process of tax refunds in a separate tax administration bill,” Duterte told Congress.

The President also vetoed items on allowing existing registered activities to apply for new incentives for the same activity, limitations on the power of the Fiscal Incentives Review Board, particular industries mentioned under activity tiers as well as provisions granting the President the power to exempt any investment promotion agency from the reform.

“Create has been created. This is one of the pins of light signaling the end of this dark economic tunnel,” Salceda said.

The Create Act will slash corporate income tax (CIT) to 25 percent from 30 percent, which is regarded as one of the highest rates in Southeast Asia. It will also reduce CIT to 20 percent for micro, small and medium enterprises with net taxable income of less than P5 million and total assets below P100 million.

Under the new law, key domestic market enterprises may be given up to 12 years of incentives, including four to seven years of income tax holiday. It aims to provide relief to businesses affected by the pandemic and help Filipinos generate jobs through foreign direct investments.

Create may be applied retroactively from July 2020, paving the way for corporate taxpayers to save on their yearly payments.