FDA stops use of AstraZeneca

The Food and Drug Administration (FDA) has advised the Department of Health (DoH) to stop giving the AZD1222 vaccine of British-Swedish drugmaker AstraZeneca to persons below 60 years old.

The recommendation comes after the European Medicines Agency (EMA) announced on Wednesday that it found “possible links” between the vaccine and blood clots in 16 cases across Europe. 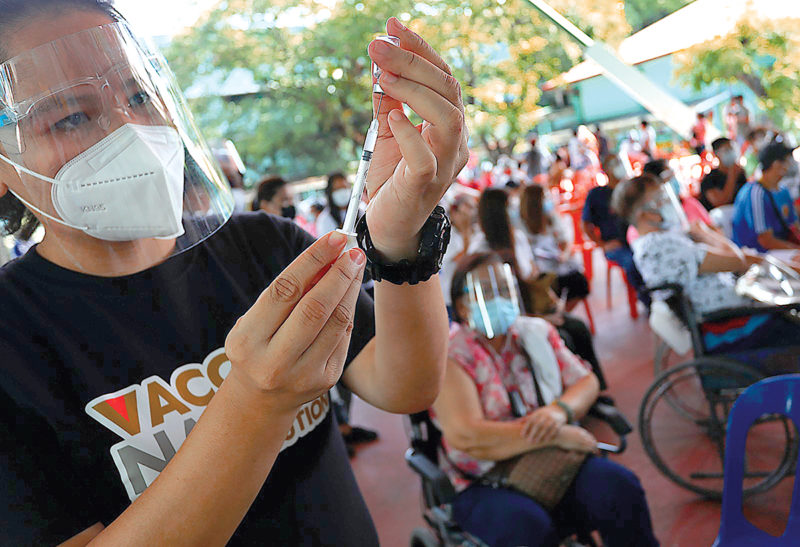 SAFE FOR SENIORS A health worker prepares to administer Sinovac vaccine at the Andres Bonifacio Elementary School in Tayuman, Manila on April 8, 2021. PHOTO BY MIKE ALQUINTO

The EMA pointed out that the clots were a “very rare side effect” of the vaccine and that taking the vaccine remained beneficial.

FDA Director-General Rolando Enrique Domingo said the National Adverse Effects Following Immunization Committee has not received reports of possible platelet and thrombotic issues among those who had been inoculated with the vaccine in the country.

However, Domingo said the FDA advised the Health department to restrict the use of the vaccine in light of the EMA warning.

He added that those who took the first dose and did not experience any adverse reaction will be allowed to take the second dose.

“If nothing happened after the first dose then [there should be] no problem [on the] second dose. This is very rare, but it will be included in the things to watch out for so we have to review the data and prepare before the next batch of vaccines come,” Domingo told reporters in a Viber message.

“I want to emphasize that this temporary suspension does not mean that the vaccine is unsafe or ineffective — it just means that we are taking precautionary measures to ensure the safety of every Filipino. We continue to underscore that the benefits of vaccination continue to outweigh the risks and we urge everyone to get vaccinated when it’s their turn,” he added.

The country expects to receive more than 900,000 doses of the AZD1222 vaccine through the Covax Facility in May as well as additional doses procured through the private sector in the third quarter of the year.

A number of nations have suspended the use of AstraZeneca’s vaccine for younger populations after it was earlier banned outright in several places over blood clot scares.

The United Kingdom on Wednesday said it would adopt new medical advice to offer most people under 30 an alternative to AstraZeneca if possible after reporting 19 deaths from clots among people who received the shot.

The EMA examined 86 blood clotting cases, 18 of which were fatal, out of around 25 million people in Europe who received the AstraZeneca vaccine. Most of the cases were in women aged under 60.

But EMA chief Emer Cooke said no particular risk factor had been identified and the clots might be linked to an immune response to the vaccine.

“The benefits of the AstraZeneca vaccine in preventing Covid-19 overall outweigh the risk of side effects,” she told a news conference. “It is saving lives.”

The World Health Organization’s vaccine experts on Wednesday echoed EMA’s findings, saying a causal relationship between the vaccine and blood clots was “plausible but is not confirmed.”

AstraZeneca itself said two studies by British and European regulators “reaffirmed” that the benefits of its vaccine “far outweigh the risks.”

Canada, France, Germany, Italy, Belgium, Spain and the Netherlands are among countries not recommending the shot for younger people.