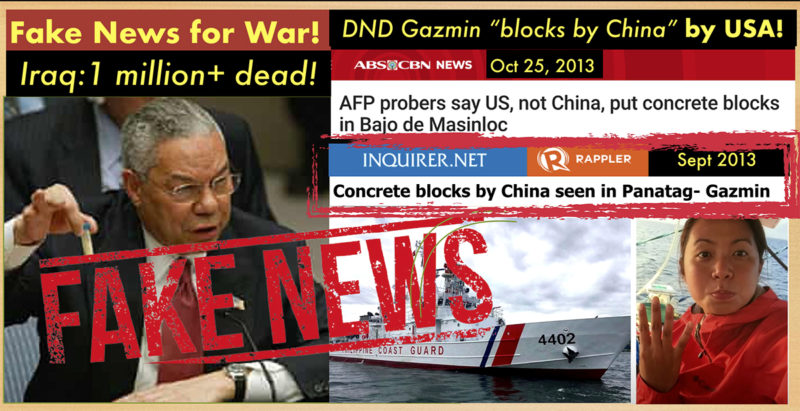 It is common for boats to tie to each other for better stability in bad weather.

Lights operating at night? To catch fish, of course! Why did the Department of Foreign Affairs (DFA) yell “Leave immediately” when China has been occupying two reefs since 1988? Vietnam has been occupying four reefs since the 1970s. The Philippines only named Julian Felipe in 2008. Any diplomat, hopefully Foreign Affairs Secretary Teodoro Locsin Jr. is one, knows that the more he publicizes the issue, the harder it is to resolve differences with another country. An Esquire article alleged that China “only respects force” as it withdrew because of the presence of US and Philippine vessels. Readers would probably note that China pulled out most of the boats a week after President Rodrigo Duterte talked with Chinese Ambassador Huang and more than a week before the American boats arrived around April 9.

The magazine quoted anti-China writer Heydarian about the supposed intrusion, but did the guy do a comparative history and global events? The US has over 800 foreign bases (China: three) and 6,000 nuclear warheads (China: fewer than 400).

US normally spends more than half its national budget on the military, bigger than the next 10 countries combined.

China has settled 17/23 territorial disputes peacefully; the US has been involved in over a hundred wars and coups.

China has helped over 70 countries in this pandemic, the US has hijacked and blocked medical and vaccine shipments. The US, with the West, crushed and looted China for over 100 years and made the Chinese drug-addicted to opium.

The geopolitical reality is that China will not allow the US to strangle it again, a violence that it regularly inflicts on non-aligned states today such as Iraq, Venezuela and Libya.

Unfortunately, the Philippines is caught in between, but China is willing to share majority benefits with neighbors and the world.

For instance, China is proposing a 60-40 sharing of proceeds from oil exploration in the South China Sea in favor of the Philippines, far higher than the Western companies in Malampaya.

Why don’t Locsin, Carpio or del Rosario protest the larger Vietnamese installations in the Julian Felipe Reef? Why not ask Hanoi to leave Southwest Cay or Kuala Lumpur to leave Sabah, which are Philippine territories? Because they were given away by the US and the UK?

It is clearly meant for US propaganda against China and to influence the Philippine government to again give the US military access to the Philippines.

Fact check: Was there an incident with Chiara Zambrano, the ABS-CBN reporter?  She went all the way out into the sea to an area the Chinese have been in for years. To do what? It turned out they weren’t chased out as misrepresented by her; there were no videos of interviews of fishermen there that she had said she wanted to do. The excitable young woman was given an award by the Armed Forces of the Philippines for creating an issue where there was none. Timed with Araw ng Kagitingan, is that journalism or sensationalism?  Chiara once asked the public...

”Please be more discerning. To the writers of these travesties, those who pick things up online and twist them in malicious ways, please stop. Not here. Not at this time. Not in this war…” (bit.ly/ChiaraPlea)

Why was Chinatown TV, a half-hour news show, attacked, then removed from ANC?  It reports in English, Chinese and Tagalog, with subtitles in English so Filipinos can learn Mandarin for better mutual understanding. Perhaps even to expand the commercial and technical outlook of the average Filipino. Ging Reyes said, “It’s time we considered embracing the diversity of this land we all call home.” Should Ilocano or Cebuano associations now be banned from having shows in other countries? Watch now as the US-backed media and local opposition join forces to keep creating anti-China issues, flimsy excuses to fear invasion and Chinese in order to pressure Duterte into renewing US free military movement in the Philippine areas of influence via the Visiting Forces Agreement (VFA). To be jubilant about the US declaring it now will defend the Philippines if attacked is to be sweet-talked again. China will not attack the Philippines or the US, unless we become part of the US offensives.

The US breaks its word all the time — before the UN, the European Union, TPP, etc. It created dictators and had them killed later.

The US isn’t defending the Philippines or any other country, not even itself from invasion, but just to be No. 1 as it tries to impose its supremacy, culture, finance and laws on the rest of the world.  The Philippines has been screwed by its supposedly prime ally for over a hundred years.

Don’t we think another cultural model is worth trying… rely on ourselves and work with both the US and China, accept constraints of reality and develop strengths in opportunity segments?

China donated over a billion in medical equipment and supplied masks when the Philippines had none, over P20 billion in grants and was the only source of vaccines for our health workers and over a million Filipinos, despite all the demonizing by critics, who contributed nothing. Gratitude or giving up territory wasn’t required, but a little respect and appreciation instead of misinformation. But we cannot do that if we keep allowing one side to provoke us into fights with the one who will be able to provide us the best value technologies, markets and infrastructure this century.

Anna Malindog is professor of Political Science, International Relations, European, South East Asian and China Studies. She has worked with the Asian Development Bank and other international nongovernment organizations as a consultant.

New Worlds by IDSI (Integrated Development Studies Institute) aims to present frameworks based on a balance of economic theory, historical realities, ground success in real business and communities and attempt for common good, culture and spirituality. We welcome logical feedback and possibly working together with compatible frameworks ([email protected]).