DAVAO City Mayor Sara Duterte-Carpio has emerged as a possible top contender for president in the 2022 national elections, according to the latest Pulse Asia survey.

The nationwide survey from February 22 to March 3 showed that 27 percent of Filipinos would support Duterte-Carpio succeeding her father, Rodrigo Duterte, as president should the 2022 elections be held this year.

She got majority preference from Mindanao with 60 percent, followed by Visayas (21 percent), Luzon (17 percent), and the National Capital Region (12 percent).

In previous interviews, Duterte-Carpio said she would decide by January 2021 if she would push through with a presidential bid.

President Duterte, however, has discouraged his daughter from running, saying it is not worth pursuing.

In Metro Manila, the leading candidates are Domagoso (24 percent) and Marcos (18 percent), while those in the rest of Luzon are favored to vote for Marcos (19 percent), Duterte-Carpio (17 percent), Poe (15 percent), or Domagoso (13 percent).

In the Visayas, Duterte-Carpio received the most support (21 percent), followed by Pacquiao (15 percent), and Poe (14 percent).

As for vice president, Domagoso clinched the top spot with a 16 percent preference.

He was followed by Pacquiao (15 percent), and Duterte-Carpio (15 percent), who "are statistically tied for the top spot as of February 2021", the pollster said.

Senate President Vicente Sotto 3rd and Marcos both took the third spot, earning a voter preference of 11 percent each.

Go claimed the fourth sport, getting the nod of 9 percent of adult Filipinos.

Pacquiao remained the top choice for senator in the 2022 elections after he obtained a national voter preference of 58.9 percent in the same Pulse Asia survey.

Cayetano secured the third to eighth spot with 44.4 percent, while Marcos claimed the seventh to 10th spot with 40.7 percent. 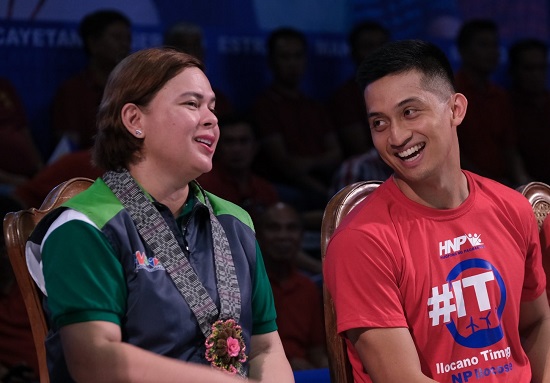