Environmental self-destruction:  Fukushima and the Philippines

Japan made a shocking announcement on April 13, 2021, declaring that it would dump some 1.2 million tons of nuclear wastewater that it claims is deactivated from harmful levels of radiation. No independent testing of the water to verify was allowed, as was previously promised, before the water was released, according to a South China Morning Post report.

Unilateral, without consultation with other countries around it that would be affected, it provoked much anger in nearby countries. 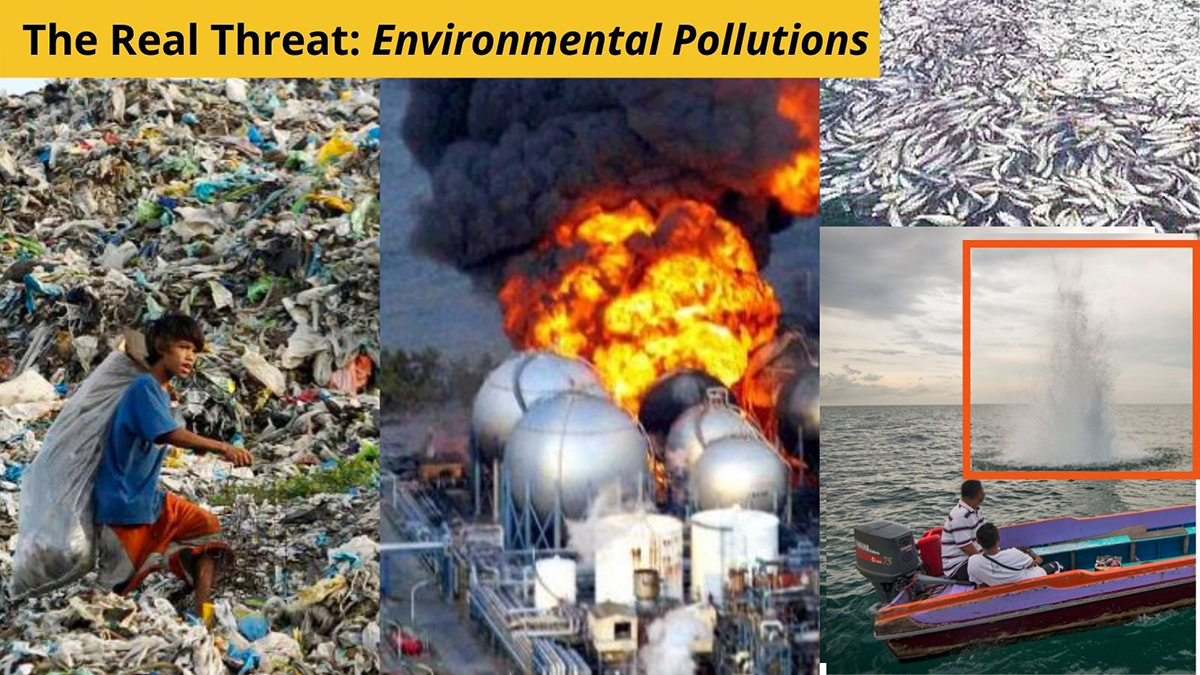 Child scavenger in one of the Philippines’ mountains of garbage; nuclear explosion of Fukushima; fish kill due to dynamite fishing COLLAGE BY IDSI

Only the US endorsed Tokyo’s decision, while the US continues its ban on imports of farm and seafood products from the Fukushima region, as have several countries.

The Philippines then also suddenly lifted all import bans on Japanese foods previously restricted over nuclear radiation concerns. Yes, Japan has been a good friend to the Philippines, but did our Food and Drug Administration, which is very strict even when it comes to internationally certify acceptable products, even test these? Who needs to when the US tells the Philippines?

The International Atomic Energy Agency (IAEA), supposedly the global body working for the safe, secure and peaceful uses of nuclear science and technology, said the ocean discharge was in line with international practice. Some experts, however, feel that the IAEA will eventually and probably provide the scientific justification because its function is to promote nuclear power and it also supposedly has never pronounced against a discharge.

We Filipinos need to not completely trust pronouncements by anyone, and learn methods of scientific inquiry and cross-referencing for more independent decisions. More examples of data that need more accurate presentation must be gathered before we go to Philippine management.

The US keeps pointing to China as the largest carbon dioxide greenhouse gas emitter. But it produces twice as much as China per capita (16 metric tons per capita vs 7.1) and has emitted more carbon dioxide than anyone.

The US not only walked away from the Paris climate agreement in November 2020, Trump even increased the allowable carbon pollution limits for US factories and power plants. In 2020, China pledged to keep greenhouse gas emissions by 2030 and reach net zero by 2016, joining the world in organizing for the need for a green revolution.

Japan subsequently pledged net zero emission by 2050, and then in 2021, the US pledged to achieve carbon neutrality by 2050. A more sensible President Biden has revived climate initiatives, and unlike the Alaska invitation to China to be lectured, this time sent John Kerry, a respected and serious politician, to achieve restarting new cooperations — definitely good for the world.

What is the Philippine record on the environment? More gripping horror stories that hopefully would have happy endings.

Dynamite fishing is more catch for less effort, with little marine life surviving in a 30 to 100 feet radius. It kills not just fish but even microscopic plankton, seahorses, even whales and dolphins. It disintegrates corals.

Similar methods of mass destruction to fish include cyanide and other poisons and “muro ami” pounding on corals to flush out fish into nets, traditionally used by child divers. These methods substantially destroyed our coastal fishing (expert estimates go as high as 80 percent) such that the boatload of fish that can sometimes be obtained in a trip in the 1960s dropped to less than 10 percent by 2000. This poor management has made our fishermen, like our farmers, the poorest sector for decades, and driven them to go far afield for catch.

We did it all ourselves outstandingly, no other country or person to blame. There are other factors: population growth, formerly no management of habitats or spawning periods (until today regularly violated), weak monitoring and poor implementation (violators are let off). Commercial fish farming is a double-edged issue for another article.

A little planning would have made a big difference. Our Asean neighbors have shown the ability to retrain their fisherfolk in other industries and invite investments.  Coastal towns with tourism or other industries have increased incomes far more than fishing… but surveys showed that many Filipino families with improved incomes end up working just half a day, enjoying leisure instead of increasing and capitalizing the income.

Corals are part of what make the Philippines among the three most beautiful and biodiverse countries in the world, including Indonesia and Australia. The same destroyers of fishing have caused our corals, some 90 percent, now classified in the poor and fair category, and endangered. Ocean temperatures arguably caused mass coral bleaching, the worst happening in Bolinao in the 1990s. In 2011, “the rape of the ocean” when corals twice the size of Manila was decimated by poachers in Cotabato.

Plastics, the indestructible material, are beginning to fill our seas and land. The Philippines has become notorious as the 3rd worst plastic polluter in the world… with 2.7 million metric tons (MT) of plastic disposed of a year, from various practices like the use of sachets in consumer goods. The US is by far the biggest producer of plastic waste at 46 million MT a year, although China is the biggest producer of the material.

The US and the UK produce more plastic waste per capita than any other major countries.

Some studies had suggested Asian countries were the highest in marine plastic pollution, but this does not include the US exports or illegal dumping within the country. The US is 4 percent of the world’s population yet uses over 15 percent of the plastic waste. World joint effort is needed to curb this outcome of population and consumerism.

More than 75 percent of our forests and mangroves have been cleared, watersheds denuded, losing water infiltration and causing slow recharge of water tables. President Aquino 3rd noted that most tree planting programs are for photo opportunities and not sustained.

We can look at China’s “Great Green Wall” reforestation program. A 72-year program that in 40 years has been able to push back the desert in an ongoing battle, increasing tree-planted areas to 18 million hectares, raising forest cover to 21 percent — contributing the greatest share along with India, to the regreening of the world, as confirmed by satellite images. Many mistakes were made, including inappropriate species for an area and wildlife, overplanting that taxed the ecosystem and water, need for diversification of plant types instead of just the fast growth… But with learning, they continue to advance.

There are programs improving our Philippine management… there are added community help in monitoring, added Coast Guard vessels, funding and equipment, mining and other controls under Aquino 3rd and Duterte; there is the cleanup of Boracay and Manila Bay under Duterte — strict coastal beach regulations implemented even against many top tourist establishments, but overall achieving a new sense of pride and consciousness. There are many failed programs as well.

When we blame others, we are being hypocrites when we don’t examine ourselves and actually implement conservation, observe minimal consumption and waste, and promote avoidance of plastics, among others. No better time than today to start in our families to “ leave nothing but footprints in the sand.”

New Worlds by IDSI (Integrated Development Studies Institute) aims to present frameworks based on a balance of economic theory, historical realities, ground success in real business and communities, and attempt for common good, culture, and spirituality. We welcome logical feedback and possibly working together with compatible frameworks ([email protected]).