US formally withdraws from its longest war in Afghanistan

KABUL: The United States formally begins withdrawing its last troops from Afghanistan on Saturday, bringing its longest war nearer to an end but also heralding an uncertain future for a country in the tightening grip of an emboldened Taliban. 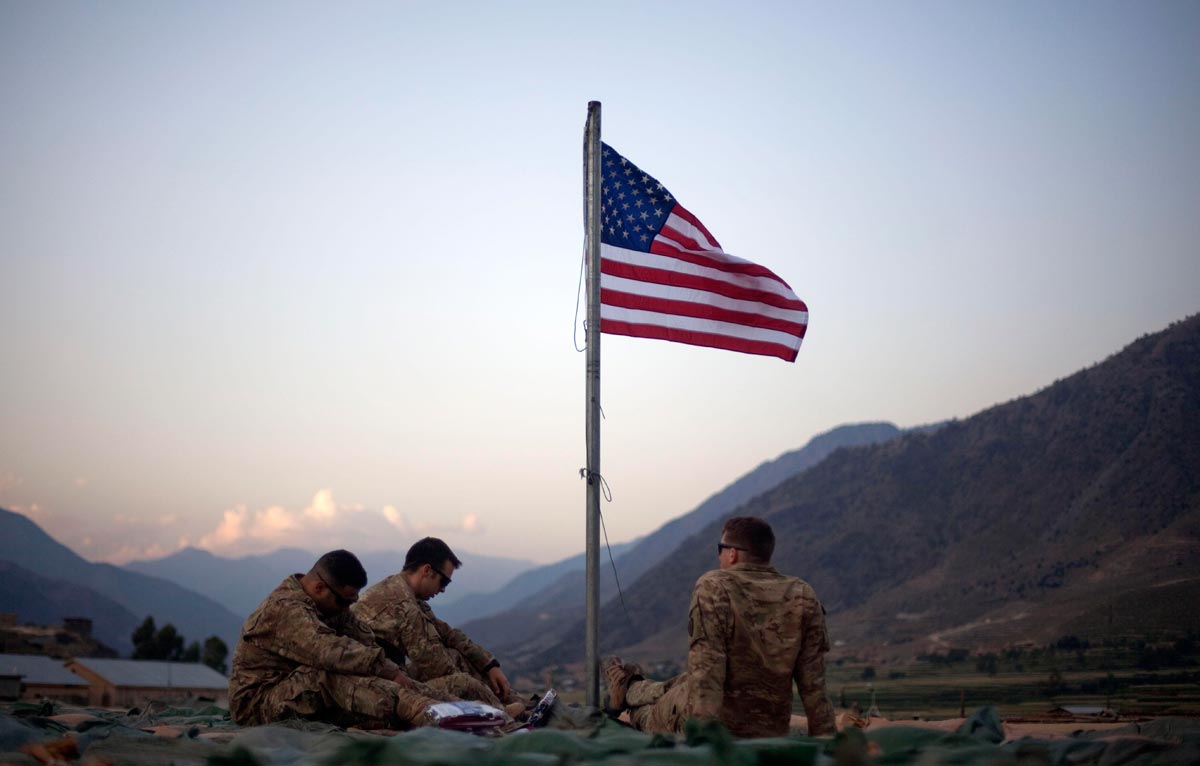 In this Sept. 11, 2011 file photo, US soldiers sit beneath an American flag just raised to commemorate the tenth anniversary of the 9/11 attacks at Forward Operating Base Bostick in Kunar province, Afghanistan. The Biden administration’s surprise announcement in April 2021, of an unconditional troop withdrawal from Afghanistan by Sept. 11, 2021, appears to strip the Taliban and the Afghan government of considerable leverage, pressuring them to reach a peace deal. AP PHOTO

US officials on the ground say the withdrawal is already a work in progress -- and May 1 is just a continuation -- but Washington has made an issue of the date because it is a deadline agreed with the Taliban in 2020 to complete the pullout.

The skies above Kabul and nearby Bagram airbase have been buzzing with more US helicopter activity than usual as the pullout gears up, following the start Thursday of a concurrent NATO withdrawal.

The prospect of an end of 20 years of US presence comes despite fighting raging across the countryside in the absence of a peace deal.

A stark reminder of what remains came late Friday with a car bomb in Pul-e-Alam, south of the capital, killing at least 21 people and wounding 100 more.

US President Joe Biden is determined to end what he called "the forever war", announcing last month that the withdrawal of the remaining 2,500 American forces would be complete by the 20th anniversary of the September 11 attacks.

Since the US withdrawal deal was struck the Taliban have not directly engaged foreign troops, but insurgents have mercilessly attacked government forces in the countryside and waged a terror campaign in urban areas.

The exit of US forces has only exacerbated the fear felt by ordinary Afghans.

"Everyone is scared that we might go back to the dark days of the Taliban era," said Mena Nowrozi, who works at a private radio station in Kabul.

"The Taliban are still the same; they have not changed. The US should have extended their presence by at least a year or two," she told Agence France-Presse.

Afghan President Ashraf Ghani insists that government forces -- who for months have carried out most of the ground fighting against the Taliban -- are "fully capable" of keeping the insurgents at bay.

He said the pullout also means the Taliban have no reason to fight.

"Who are you killing? What are you destroying? Your pretext of fighting the foreigners is now over," Ghani said in a speech this week.

Still, General Mark Milley, chairman of the US Joint Chiefs of Staff, has not ruled out total chaos.

"You have a civil war and all the humanitarian catastrophe that goes with it."

Police officer Abdul Malik from the former insurgent bastion of Kandahar said they were prepared.

"We have to take care of our homeland... We will do our best to defend our soil," he told AFP.

The US-led military onslaught in Afghanistan began in October 2001 in the aftermath of the September 11 attacks.

Two decades later, and after the death of almost 2,400 Americans and tens of thousands of Afghans, Biden says the final withdrawal was justified as US forces had now made sure the country cannot again become a base for foreign jihadists to plot against the West.

Concerns are high that the Taliban might yet strike at retreating US forces, and in the southern province of Kandahar -- where the foes used to clash regularly -- security sources say several areas are laden with explosives planted by the insurgents.

"If the Taliban attack retreating US or allied forces, it would be to bloody the nose of a defeated enemy and to humiliate it further," said Afghanistan specialist Nishank Motwani.

"The United States and its NATO partners are stepping back and giving the two primary sides of this conflict... their first instance to fight with and assess their opponents without the extra factor of the United States," he said.