Even before we could compose a reaction to the government’s timeline for achieving herd immunity, its plan fell apart. That was hardly surprising given the obvious flaws.

Initially, the deadline was to inoculate 70 million Filipinos, equivalent to about 70 percent of the population, by yearend. Then came an announcement that the target date was moved up a bit, perhaps because of mounting public frustration over the resurgence of Covid-19 cases that required a new lockdown over Metro Manila and some adjacent provinces. 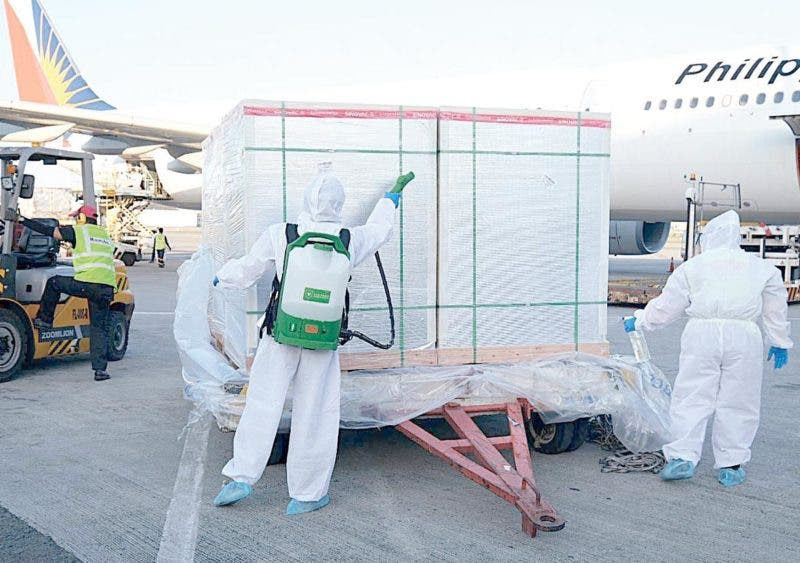 A shipment of 500,000 doses of Sinovac vaccine arrives at the Ninoy Aquino International Airport on Sunday, April 11, 2021. PHOTO COURTESY OF THE NATIONAL TASK FORCE AGAINST COVID-19

That recent bubble cost about P8 billion a day, according to Marikina Rep. Stella Quimbo, an economics professor before she entered politics. Recently, the Philippine Statistics Authority reported that the National Capital Region’s economy shrank 10.1 percent in 2020.

Again, the main culprit was the lockdown, but Metro Manila also dealt with the impact of the Taal Volcano eruption and inflation caused by supply chain disruptions and the African swine fever.

Beyond what economic accounting can measure is the continuing loss of lives. More than 17,000 here have died because of Covid-19, and worldwide, the death toll has exceeded 3 million.

With those grim numbers, it is not difficult to imagine why any government would want the pandemic to end as quickly as possible. And for sure, the best way to realize that would be to achieve herd immunity.

For the Philippines, the problem is vaccine supply. We could dwell on the government’s lack of foresight and the bureaucratic procurement process but doing so at this point hardly seems productive. We may still do so in a future editorial, but for now, suffice it to say that there may be a reckoning come election day in 2022.

In fairness to the government, pursuing herd immunity through vaccination is the right choice. But an effective plan is not wholly by design. The other part is emergent, meaning plans need to be flexible so that adjustments can be made when conditions change during implementation.

The Philippine plan seemed deficient on both counts. On the design part, the government target of daily shots seemed low. As of this writing, only 1.5 million have received at least one shot. And to vaccinate 68 million more Filipinos by Dec. 31, 2021, the government needs some 280,000 shots per day beginning May 1, 2021, including weekends and holidays. Also, remember that most of the Covid-19 vaccines available require two jabs.

So, we may need to double that figure. The number of daily shots that the government hopes to give is nowhere near those estimates.

As mentioned earlier, even the low-ball target fell apart quickly. Recently, inoculations in some cities slowed down or were postponed because vaccine supply was either low or depleted. Replenishment was also slow because not enough vaccines were arriving from abroad.

Such delays should have been anticipated because we were experiencing delivery disruptions for just about every commodity. And yet, no adjustments or contingencies were announced. Aiming for herd immunity by this year without addressing the supply and logistical issues seemed flawed.

Time for Plan B

Even as every effort is made to acquire enough vaccines to give twice to at least 70 million Filipinos, the government should aggressively pursue contingency measures.

For starters, we need to have even more testing, particularly with the more accurate polymerase chain reaction (PCR) test. And these should be given free to encourage more people to get tested.

Right now, the government averages 45,000 Covid-19 tests daily. And there is a recommendation to increase that to 90,000 daily tests.

Regardless of the testing capacity at present, the number will not seem adequate until the positivity rate falls below 5 percent as the World Health Organization (WHO) recommends.

The positivity rate in the past weeks has been more than three times the WHO recommendation, which may mean there are too many undetected Covid-19 infections.

Also, the government needs to be more effective in imposing or convincing people to observe physical distancing. That will be a challenge, as people feel more pressure to return to work.

Admittedly, these contingencies are difficult to implement. But with vaccines coming in trickles, alternatives and adjustments are needed.