The government has expanded the travel ban earlier imposed on those coming from India to include four other countries to prevent the Indian variant of the coronavirus disease 2019 (Covid-19) from entering the country. 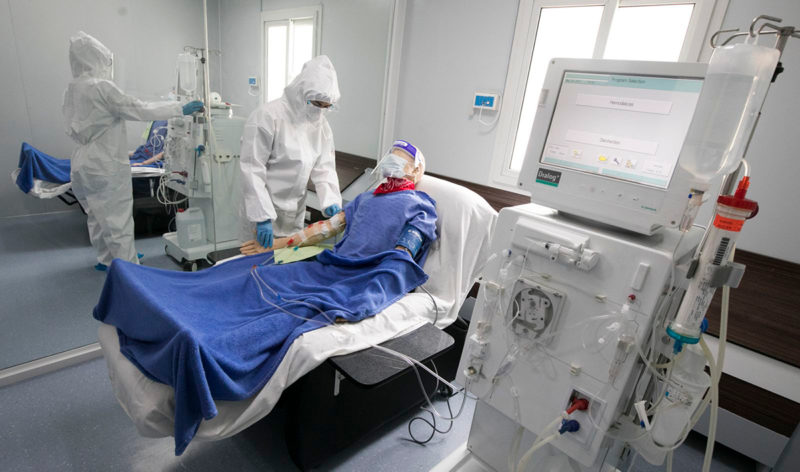 DRY RUN Personnel at the National Kidney and Transplant Institute conduct a dialysis demo at the hospital’s newly built
modular hemodialysis facility and dormitory on May 5, 2021. PHOTO BY RUY L. MARTINEZ

This develops as the Department of Health (DoH) said six passengers who arrived from India before the government imposed a travel ban tested positive for Covid-19.

The Philippines on Wednesday also banned the entry of travelers from Pakistan, Bangladesh, Nepal and Sri Lanka to avert the spread of the B1617 variant.

“All passengers coming from or who have been to Pakistan, Bangladesh, Nepal and Sri Lanka within 14 days immediately preceding arrival in the Philippines shall be prohibited from entering the country effective 0001H of 07 May 2021 Manila time until 2359H 14 May 2021,” Medialdea said.

Passengers who have been to Pakistan, Nepal, Sri Lanka and Bangladesh within 14 days immediately preceding arrival to the Philippines and arriving before May 7 shall not be prohibited from entering the country.

However, they will have to undergo a 14-day quarantine.

Filipinos and foreign passengers merely transiting through India, Pakistan, Nepal, Sri Landa and Bangladesh “shall not be deemed as having come from or having been to such country, provided that they stayed in the airport the whole time and were not cleared for entry into these countries by their immigration authorities,” Medialdea said.

Health Undersecretary Maria Rosario Vergeire said the samples of the six travelers are being sequenced by the Philippine Genome Center to determine if they had the strain that caused an uncontrollable explosion of cases in India.

The department said before the Philippines barred travelers from India, there were 110 passengers who came from that country.

All were tested and six turned positive.

The government is trying to locate them, Vergeire said. The DoH did not say if these were Filipinos or foreigners.

Experts said that the B1617 variant, considered a “double-mutant,” was behind the dramatic increase of cases in India.

The DoH reported 678 new variant infections on Tuesday, with 380 of those sampled having the so-called South African or the B1351 variant, 289 had the B117 or the United Kingdom variant, and nine had the P3 variant of the virus, which was first detected in the Philippines.

Vergeire said the World Health Organization still cannot give a classification if the number of variant cases in the country constitute community transmission.

She pointed out that the National Capital Region and Calabarzon (Cavite, Laguna, Batangas, Rizal and Quezon) have the most number of cases with both the South African and the UK variants.