The government may not be able to vaccinate 70 million Filipinos if delays in the delivery of vaccines will persist, Secretary Carlito Galvez Jr., vaccine czar, said. 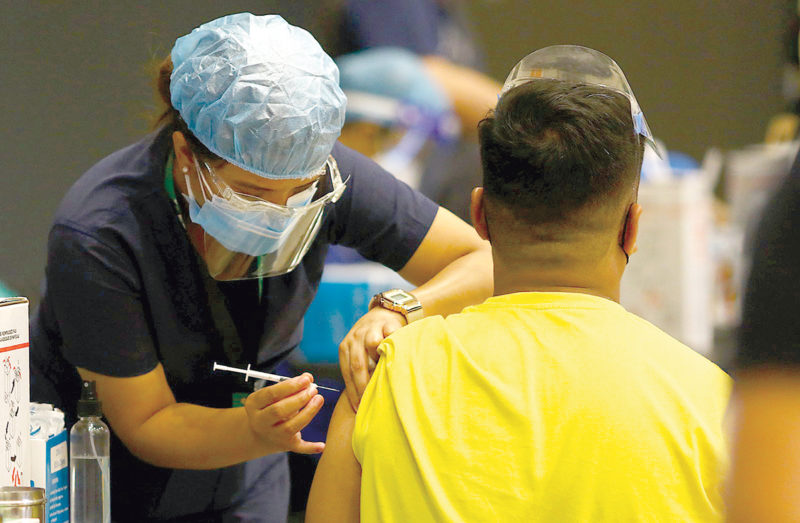 A resident gets his first dose of the Sputnik V vaccine on May 4, 2021 in Parañaque City, one of five cities that received
the vaccine. PHOTO BY MIKE ALQUINTO

The virus surge in India affected the vaccine supply in the Philippines, forcing officials to revise its vaccination target.

The government previously aimed to inoculate 70 percent of the country’s 110 million population to achieve herd immunity. Galvez, however, said the lack of vaccines required a tweaking to achieve a “more realistic target.”

The Philippines signed a supply agreement with the Serum Institute of India for 30 million doses of Novavax vaccines, which were scheduled to be delivered in the third quarter of 2021.

With the anticipated delay in the arrival of the vaccines, Galvez said the government has recalibrated its vaccination plan. It now aims to inoculate at least 50 million Filipinos this year with a focus on high-risk areas.

“Our target is really to [vaccinate] 70 million [for] herd immunity, but we see that with the constrictions of the global market, especially with what’s happening in India which has 30 million of the vaccines we got, there is a real possibility of delay,” Galvez said in a press conference in Parañaque City on Tuesday.

“In case we have a delay, and we are not able to substitute [the vaccines], we will have a realistic target of having a range of 50 million to 70 million vaccinated,” he added.

India has seen an uncontrollable surge in cases recently, with new infections staying well above 300,000 every day.

Some countries, including the Philippines, have imposed a ban on travelers from India.

Galvez, also the chief implementer of the National Task Force Against Covid-19, said the situation in India could affect the global vaccine supply.

The Philippines, he added, could also expect delays in the delivery of American firm Novavax’s Covovax vaccines, which is also manufactured by the Serum Institute of India.

He added that the government should focus on vaccinating around 50 million Filipinos in areas that have “economic and social importance.”

Galvez said there should be a “prioritization of areas” as he foresees a “further constriction in global supply” due to the surge of Covid-19 cases in India.

Meanwhile, Galvez said Sinovac would start its bulk delivery of 1.5 million doses on May 7 while a succeeding batch of 500,000 doses will follow.

Around 2 million doses of Sputnik V are also expected to arrive this month.

The Philippines has so far administered more than 2 million vaccines nationwide while more than 2,600 people had been inoculated with the Sputnik V vaccine, according to a top official of the Department of Health.

Health Undersecretary Myrna Cabotaje, who acts as the chairman of the National Vaccination Operations Center, said 2.065 million vaccines had been administered in 1,016 active vaccination sites.