Signal No. 2 up in more areas in Mindanao as ‘Crising’ maintains strength -- Pagasa

MORE areas in Mindanao were placed under Signal No.2 while some in the Visayas are under Signal No. 1 as tropical storm "Crising" maintained its strength, the Philippine Atmospheric, Geophysical and Astronomical Services Administration (Pagasa) said on Thursday. 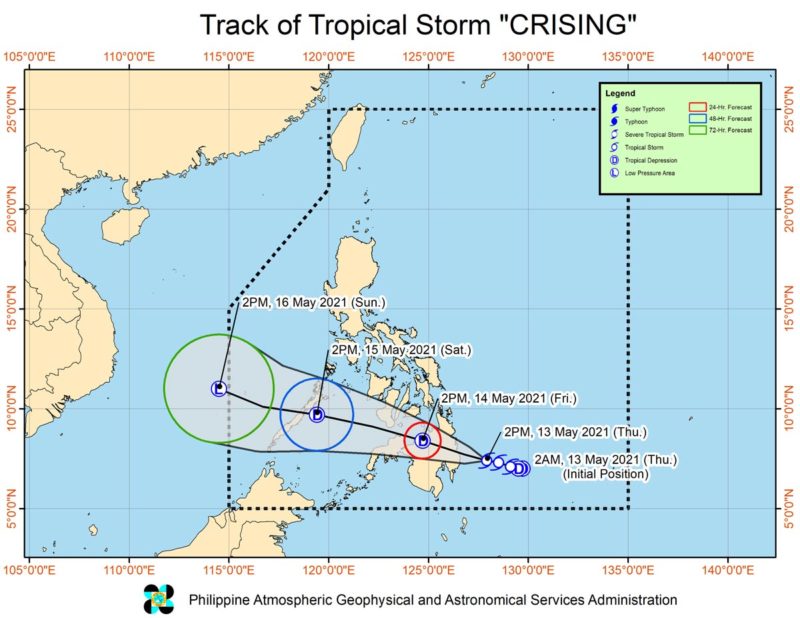 Based on its forecast track, Crising is moving west-northwestward and is likely to make landfall over Davao Oriental-Surigao del Sur area between Thursday night and Friday morning, Rojas said.

Moving at a speed of 25 kilometers per hour (kph), Crising has maximum sustained winds of 65kph near the center and gustiness of up to 80kph.

“By tomorrow (Friday), it may weaken into a tropical depression as it traverses the rugged landmass of Mindanao and will emerge over the Sulu Sea early Saturday morning,” Rojas said.

Metro Manila and the rest of the country will experience partly cloudy to cloudy skies with isolated rain showers or thunderstorms due to the easterlies.