What commodity prices are telling us, plus Sinovac results in Indonesia

BEFORE I get to today’s column, please read Bloomberg’s article published on May 12, “China Sinovac shot seen highly effective in real world study.” The results Indonesia (who the malevolent columnist wrote was leading to increasing infection and death due to their use of Sinovac) got by tracking 25,374 health workers (who are naturally high risk) in Jakarta for 28 days after they received their second dose of Sinovac showed “they were 100-percent protected against death, 96-percent from hospitalization as soon as 7 days after…94 percent of the workers were protected against infection — an extraordinary result that goes beyond what was measured in the shot’s numerous clinical trials,” quoting Health Minister Budi Gunadi Sadikin. I suppose facts can be so inconvenient to those who traffic in malice, bias and lies but these results are better than that for Johnson & Johnson and AstraZeneca (yet don’t read him going on a jeremiad about them could be his colonial mentality or racism) and at par with Moderna and Pfizer’s efficacy rates, at least based on this study.

I was also impressed by the prudence of Sinovac’s chief Yin Weidong who said he cannot comment on whether it prevents transmissibility (like Moderna and Pfizer) as they are still waiting for results on that. Even on the Indonesia test the company said they cannot comment until they get more details. Compare that to writing and bloviating of the hate- and bias-driven. I wonder how many died or got sick thanks to their peddling of lies resulting in some not taking up the vaccine even if they were high-risk, eligible and there were doses available?

This column’s topic is thanks to a suggestion of my friend and colleague Ben Kritz who thought I should expand on what I said about the topic when ANC and Mimi Ong kindly invited me to speak on “Market Watch” again last May 11. Her question was what is happening with inflation when one looks at gold, real estate and commodities? My reply was rather than give my unlearned view was to look at the facts and analyze what they are implying.

My view is their prices are confirming that manufacturing is moving up nicely, which points toward a robust economic recovery in China, the United States with the European Union to follow shortly. It is also implied that the markets view inflation as under control or at the least not a worry yet. Interest rates also confirm that, and central bank governors are saying the same. Markets can turn and policies can change but that is the unequivocal message now.

This is not going to be a comprehensive analysis of the economy. It is only on what commodity prices and the cost of transporting them are telling us. I will look at the prices of a selection from four types of commodities — precious metals (gold and silver), base or industrial metals (copper, iron ore), agricultural (corn, wheat, soybeans, and cotton), and energy (crude oil and natural gas) plus the Baltic Dry Index (bulk transportation of commodities). 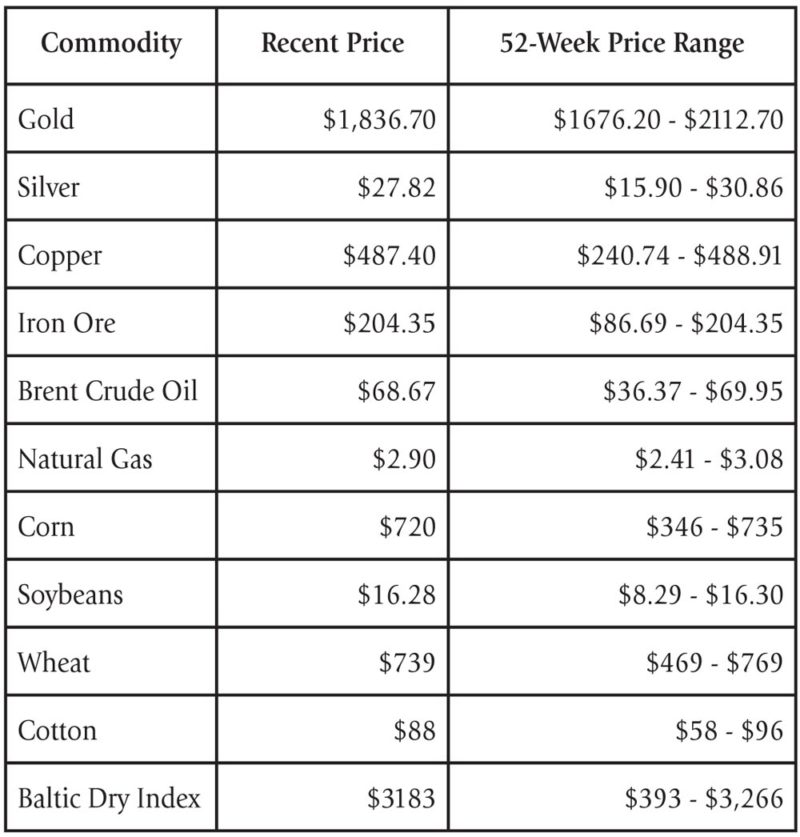 What is the biggest message from all of this? The economic recovery is robust and is expected to be at least of decent duration and that as of now inflation is not a worry. The basis is that the biggest inflation hedge — gold — is trading within a narrow range and not even at the mid-point of the range. If the consensus is inflation is forthcoming, gold would be trading near its high.

The economic recovery is robust and should last as the basic commodities used in heavy manufacturing are trading at or near their 52-week high. Ninety-eight percent of iron ore is used to make steel. Copper is critical for electrical wiring, semiconductors, circuit boards, telecommunications, construction, transportation, watches, cookware and many others. Silver, while a secondary precious metal, has really become more of an industrial metal given its use in medical equipment, solar panels, cell phones, circuit boards, fuel cells, automobile switches and other critical uses. That has superseded its use for jewelry and is why it is trading more like an industrial metal rather than a precious metal like gold. Their high prices mean a lot of manufactured goods are in great demand. They are essential and key components for these products.

Agricultural commodities also tell us employment and personal income is improving. In countries moving up economically, what is one of the fastest growing measures and a clear sign of individual prosperity? Calories. You tell me, do you generally eat better on pay day vs the day before? Whether it is a health issue is another topic but as one gets richer, doesn’t one’s food get tastier, richer, fattier, sweeter and more processed? That is why obesity is a problem in the United States but not in the Philippines.

How are these goods transported? Air, rail and land are important, but the backbone of international trade for delivery of commodities and finished products across borders is shipping. Shipping can be divided into three general areas: tankers, dry-bulk and containers. Tankers transport crude oil and natural gas. Generally, in highly industrialized and wealthy countries, power and fuel demand grows at a discount to GDP growth and these countries grow at 1 to 3 percent a year. In industrializing countries, they grow at a premium (up to 50 percent higher) than the GDP growth rate. Thus, demand for oil and natural gas is relatively stable and grows at a rate of 5 percent or below a year and is quite predictable given seasonality (higher use of heating oil in the winter and higher use of air conditioning in the warmer countries in the summer). It also takes a while to build and retire tankers given their size and cost. The tanker market and the price to move these products are generally stable. Finished products generally are shipped by container. This tends to be a real time or even slightly lagging indicator as it is fulfillment of demand. Generally, container markets are robust from August to November for consumer goods as there is normal yearend buying of gifts and so on. January to March tends to be seasonably slower. Prices tend to be volatile and seasonal.

In the middle and while not as well-known and followed but a very good leading economic indicator is the Baltic Dry Index (BDI). This is the rate for chartering bulk carriers. These are ships that are filled with one basic commodity like wheat, iron ore, copper concentrate, corn, rice and the like. They usually go from commodity-producing and -exporting countries to manufacturing countries. A lot of copper and iron ore goes from Australia to China. Thus, it is a leading indicator of where industrial production and manufacturing is going. If you are going to make a lot more semi-conductors and electrical wiring, you are going to order a lot more copper and probably need a lead time of 3 to 6 months. The explosive increase in the BDI seems to be a clear indicator of what is expected for manufacturing for the rest of the year.

PH not a participant

What does it mean for us? It is obvious that we will not be a major participant in this party given our lack of manufacturing relative to our neighbors. Expect Vietnam, Thailand, Malaysia and Indonesia to have a much better second half, especially compared to us. Who should we blame? Our dearth of manufacturing is not this administration’s fault. It is the collective blame primarily from Marcos and Cory Aquino and not addressed by subsequent administrations except in my view, the Ramos administration. Most just passively carried on and did nothing meaningful to address this systemic weakness.

About a year ago, I wrote how I agreed with the insight that we were globally and locally, in a K-shaped economy. That meant certain industries like tech and health care were pointing up robustly, financial services were in the middle, and pointing down were malls, airlines and the like. Today, I think we are seeing a K-shaped recovery. Those with heavy manufacturing are doing very well, and producers of commodities like copper and secondary or lighter manufacturing are doing well and those relying on services and the like much less so. I suppose we could have responsibly been at least part of the commodity-exporting part but for that, we can blame recent administrations.