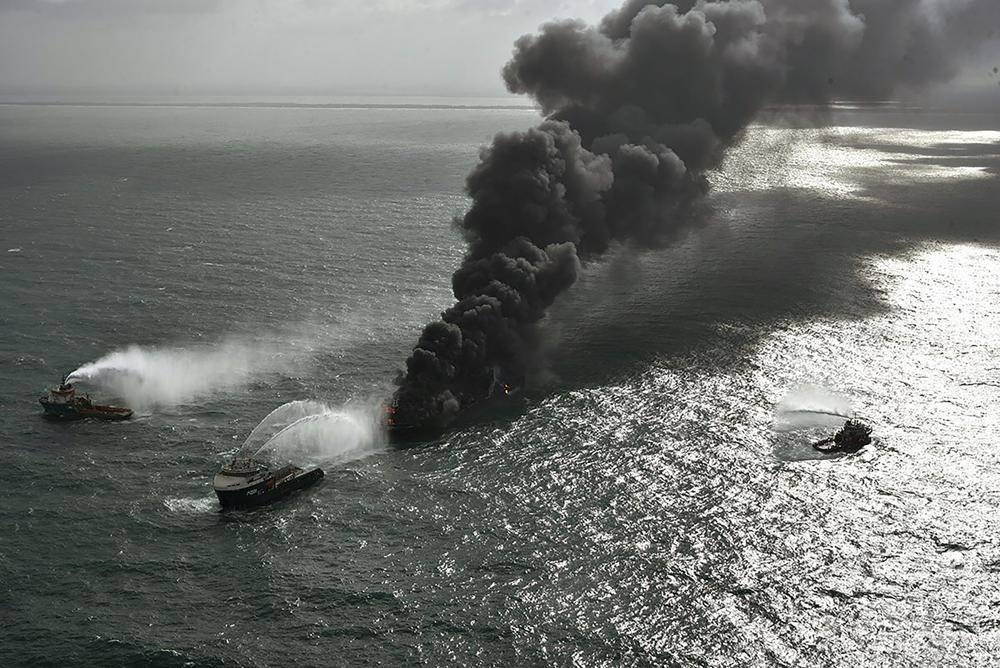 NEGOMBO: Sri Lankan authorities have been battling to put out a fire raging for a week on a stricken container ship loaded with chemicals to avoid a potential marine environmental disaster.

The Singapore-registered vessel, within sight of the shore, is carrying 25 tons of nitric acid as well as other unspecified chemicals and cosmetics, the navy said.

Eight of its nearly 1,500 containers fell overboard on Tuesday, one of which washed ashore at the Negombo tourist beach 40 kilometers north of Colombo.

Strong winds associated with a cyclone hitting eastern India hampered efforts to put out the blaze as a huge cloud of black smoke rose from the MV X-Press Pearl.

Sri Lanka's air force used helicopters to drop about 425 kilograms (935 pounds) of fire retardant chemicals on the ship on Wednesday.

Dharshani Lahandapura from the Marine Environment Protection Authority said containment measures were being prepared in case chemicals or fuel oil are spilled from the ship's engine and fuel tanks.

"Computer modelling showed any spill from the ship will reach the Negombo beach and we are ready to tackle it," Lahandapura told reporters in Colombo.

"Given the monsoon wind pattern, we are concentrating on this area and we are moving equipment to deal with a spill," she said.

Navy spokesman Capt. Indika de Silva said the 25-member crew had been evacuated safely but one had been hospitalized with minor injuries.

The container ship was on its way to Colombo from Gujarat in India when the fire broke out on deck on May 20 around 14 kilometers offshore. Residents in Negombo were seen scavenging plastic raw materials that washed ashore on Wednesday morning.

Tugs and naval ships were leading the efforts to douse the blaze and three Indian coast guard vessels were expected to join the effort later Wednesday.

India already sent another ship and an aircraft on Tuesday to assess the damage and coordinate fire-fighting efforts, the Sri Lanka navy said.