Read Next
Asian markets rise on good US inflation data

ONCE in a while, truth is suddenly revealed much like a bolt of lightning in an instant reveals a landscape in a dark night.

This is exactly what happened recently when a report in the internet version of the once-oligarch, Lopez-owned ABS-CBN media outfit showed to a sickening extent its reporters' coddling of the communist New People's Army (NPA).

On June 6, the Philippine National Police issued a press statement that the rising football star Kieth Absalon was killed, together with his cousin, by an NPA anti-personnel land mine in Masbate as they were riding on their bicycles. Most newspapers and the state-run Philippine News Agency ran news stories with roughly the same headline: "FEU booter, cousin killed in NPA mine blast."

But not the abs-cbn.com. Its headline, based on the same PNP press statement was: "Up-and-coming footballer Kieth Absalon passes away at 21." It definitely wasn't merely a case of a writer misusing a term "pass away," which is mostly used for deaths due to natural causes.

There wasn't even a reference to the NPA in the entire piece, not even a sentence that the police alleges that Absalon was killed by an NPA mine. Three days after this brazen attempt to hide the fact that it was the NPA that murdered Absalon and his cousin, abs-cbn.com even shamelessly ran a piece titled: "Footballer Kieth Absalon died of gunshot wounds, blast injuries - death certificate." It was a shameless attempt to claim even subliminally that "Absalon didn't die just because of the NPA mine. He was probably shot later by the PNP." This was probably a fake news story the communists were thinking they could develop but abandoned.

Abs-cbn.com stopped attempting to raise doubts about the murderous role of the NPA only when the Communist Party itself issued a statement admitting it was its mine that killed Absalon and his cousin and expressed its "deep remorse." 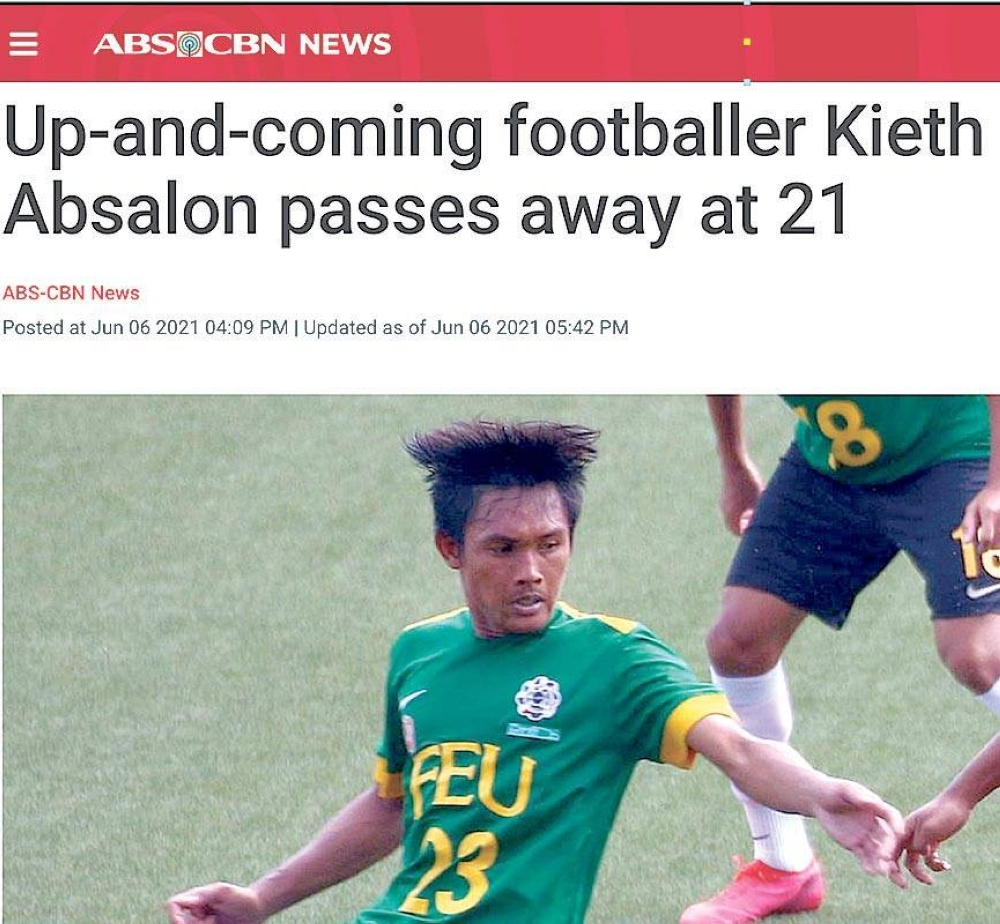 Refusing to report he was killed by an NPA landmine SCREENGRAB FROM ABS-CBN.COM

This is just another instance of the Communist Party's very successful infiltration of media since it launched its armed insurgency in 1969. You can easily spot communist-backed articles when these refer to high-ranking party cadres arrested as "peace talks consultants."

Rather than putting priority on organizing peasants, as did the old Partido Komunista ng Pilipinas and Maoist theory espouses, Communist Party chairman Jose Ma. Sison at the start focused on organizing the youth and students through his Kabataang Makabayan. He justified this by his claim that the youth are the most articulate sector of Philippine society, i.e., the best propagandists.

Sison in fact devoted a lot of his time in recruiting media people into his first core of cadres, such as the then business editor of the pre-martial law The Manila Times Satur Ocampo and Philippines Herald associate editor Antonio Zumel. Jose Lacaba, whose Philippine Free Press articles on the massive student demonstrations of the 1970s inspired so many students to become activists, was Sison's early recruit. Sison even used a newspaper, The Dumaguete Times, organized by one of his inner core Hermenegildo Garcia 4th and his wife, as a first step in undertaking the revolution in the Negros Islands, at the time thought to be ripe for revolution because of the extreme exploitation of sugar hacienda workers.

The first target for control by Sison's cadres at the UP was the Philippine Collegian, which since 1969 had editors who were Communist Party cadres or sympathized with it, although most of them went on after college to take on careers serving the ruling class. Read the Philippine Collegian now (easily accessible through their Facebook page) and it follows closely the line set by the party's official newspaper Ang Bayan.

Sison spent more time writing his plagiarism of Mao and the Indonesian Maoist D.N. Aidit and developing the Ang Bayan than organizing the masses. Sison in this case was a firm believer of Lenin one of whose most famous quotes is: "A newspaper is not only a collective propagandist and a collective agitator, itis also a collective organizer."

I myself am Exhibit A for the communist infiltration of media. Even as I had resigned from the party in 1974, after discovering incontrovertible proof that Sison had ordered the Plaza Miranda bombing of 1971, I still believed in Marxist theory, which guided me in my journalistic work in Business Day (together with four other ex-communists there) that I would like to think helped erode the political base of the Marcos dictatorship.

One of the main factors why our media has been deeply infiltrated by communists or their sympathizers is that for decades the deans and professors at the College of Mass Communication, especially of UP but including Lyceum, had been longtime communist sympathizers or those who believe in Marxist theory. This has resulted in the fact that many of probably two generations of media practitioners from these schools are imbued with the communist mindset.

One obvious problem is that other than the usual capitalist ideology (that life's meaning is to make money) there hasn't been a powerful counter-ideology against the communist serve-the-people-by-serving-the-party ideology, which is needed to inspire our idealistic youth.

The Akbayan in the 1980s, set up by ex-party cadres and non-Leninist Marxists, had tried to develop such a non-communist ideology but has miserably failed, with its members even becoming the most rabid of the Yellows and the most subservient to the ruling class, such as Sen. Risa Hontiveros.